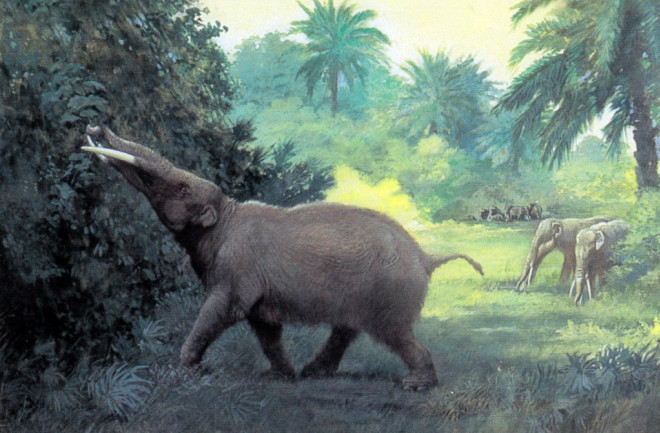 An artist's depiction of a gomphothere. Credit: Charles R. Knight The site is called the "end of the world," but for archaeologists, it's just the beginning of a new chapter in understanding the origin and activities of the earliest Americans. Located in Mexico's Sonoran Desert, the excavation site of El Fin del Mundo (Spanish for "the end of the world") has yielded a number of artifacts identified as Clovis — considered the Americas' first indigenous culture — and remains of elephant-like animals called gomphothere (Cuvieronius sp.). Although gomphothere were once spread over large areas of North America, it was thought they predated the arrival of humans to the continent. El Fin del Mundo, dated to about 13,390 years ago, is the first site to hint that humans may have hunted the animals.The End of the World The Clovis archaeological complex, as it is formally known, is defined primarily by fluted spear points and other distinctive artifacts, including those found buried with an infant Clovis child in Montana roughly 12,600 years ago. It is believed that the Clovis culture was the first to emerge in the Americas, and was based on earlier cultures of the people who migrated here from Siberia, across the now-submerged land bridge of Beringia, roughly 15,000 years ago. The exact origins and chronology of the Clovis culture have remained a mystery, however.

A gomphothere jaw bone in situ at El Fin del Mundo excavation site. Image courtesy of Vance T. Holliday. El Fin del Mundo represents one of the oldest known Clovis sites, and researchers believe its location — deep in modern-day Mexico — suggests that the culture arose in the American Southwest and then spread in all directions. Previously, other archaeologists had suggested the Clovis originated further north, but the El Fin del Mundo team argues that their site is too early for the culture to have reached all the way to Mexico unless it had begun relatively nearby. Analysis of the El Fin del Mundo site appeared online today in Proceedings of the National Academy of Sciences. Conclusive evidence of where and when the Clovis culture originated, however, is still unknown. The remains of two gomphothere from El Fin del Mundo were found in piles, which led the excavation team to conclude that humans had arranged the bones, likely after hunting, killing and using the animals for food and other resources. The Clovis people previously have been associated with hunting sites for mastodon, mammoth, bison and horse — now researchers can add gomphothere to the menu.