The storms boiled up on the Mexico-Texas border and pelted more than 10,000 square miles with hail. 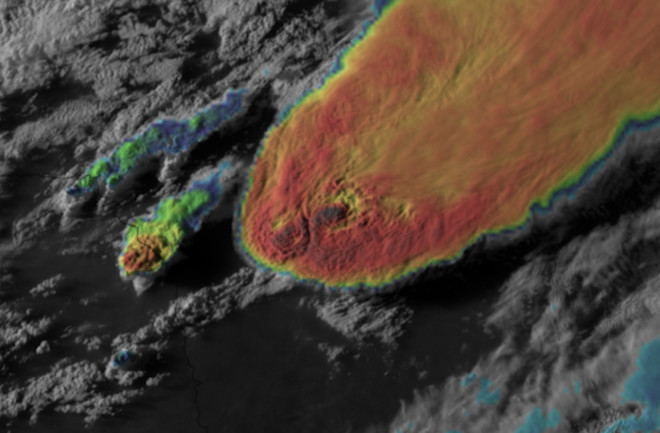 A massive thunderstorm system boiling up over Texas starting on April 28, 2021 and continuing on the 29th. The image consists of weather satellite data from the visible and infrared portions of the electromagnetic spectrum. See below for an animation of the storm as it grew and moved to the northeast. (Credit: RAMMB/CIRA)

As supercell thunderstorms boiled up in a bubbling atmospheric cauldron over Texas and Oklahoma on Wednesday, April 28, 2021, they began dumping damaging hailstones as large as softballs across a vast area.

The chumks of ice damaged cars, homes and other structures, and caused at least one injury when a stone smashed into a person's head in Oklahoma.

The map above show the footprint of hail that fell from a few of the supercell thunderstorms. It stretchs from Mexico just west of the Rio Grande, all the way over to San Antonio and just shy of Austin, Texas. By my rough calculations, an area larger than 10,000 square miles got pelted — a significant portion with stones larger than an inch.

The video above, consisting of images acquired by the GOES-16 weather satellite at intervals just one minute apart, shows the thunderstorms moving to the east, starting on April 28, 2021 and continuing on the 29th. The imagery combines visual and infrared views. And the video is framed so that it stays roughly centered on the storms.

As supercell thunderstorms like these grow, vigorous updrafts propel air and moisture higher and higher, resulting in dramatic cooling. In the video, super-cold temperatures from this process are indicated in tones of yellow, orange and red.

When the rising cloud tops reach the boundary between the the troposphere, the lowest layer of the atmosphere, and the stratosphere above, they tend to spread out. That explains the distinctive anvil shape of big thunderstorms. This happens because the boundary, called the tropopause, acts like a ceiling.

But with supercell thunderstorms, the updrafts can become so vigorous — the air can actually rise at 100 miles per hour! — that they punch through the wall, creating bubbling, bulbous protrusions called overshooting tops.

If you look carefully at the video you can see dark-colored protusions developing at the cloud tops. These are overshooting tops. Here, the parcels of air have shot so high that they've cooled to -80 degrees C and less, according to Scott Bachmeier of the Cooperative Institute for Meteorological Satellite Studies, writing in a blog post.

This photograph was taken from an aircraft participating in a study of supercell thunderstorms in May of 2012. It shows a storm with overshooting tops above central Oklahoma. (Credit: NASA Earth Observatory)

The image above shows what they look like from relatively closeup.

And here's another way of looking at the Texas supercells — two windows, with a view in visible light at top, and an infrared view at bottom:

At top is a visible view of the supercell thunderstorms that moved across southern Texas on Wednesday, April 28th and into the 29th. At bottom is an infrared view. The arrows indicate over-shooting tops, where cloud temperatures plunged to -80 degrees C or lower. Both views were acquired by the GOES-16 weather satellite. (Credit: CIMMS Satellite Blog, with annotation by Tom Yulsman)

The overshooting tops are visible here too. I've labelled them with arrows.

For another animation showing the development of the storm, check out Scott Bachmeier's post here.

In both that video, as well as the one I embedded above, wave-like patterns can be seen developing in the cloud tops as the storms grow. These are gravity waves, and they're analagous to the waves that ripple outward when you toss a stone into a pond. Except in the case of a storm, the disturbances that produce the waves are those updrafts punching upward through the atmosphere.