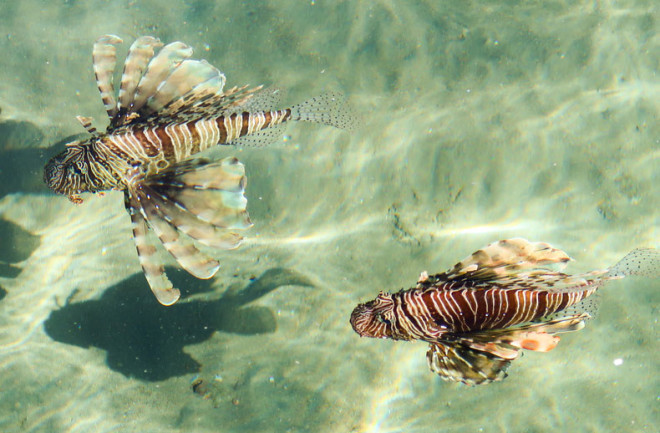 The first wave of invaders likely numbered 48 or more, according to new research. (Credit: kzww/Shutterstock) In 1992, Hurricane Andrew ripped it's way across the southern US. Southern Florida, where Andrew made landfall, was one of the hardest hit areas. It's estimated that over 100,000 homes were damaged, and 63,000 were destroyed—among them an expensive beachfront house with a very large and memorable aquarium. That aquarium contained six lionfish, and when it broke, they were swept into Biscayne Bay. And so began the lionfish invasion into the Atlantic. ... at least, that's what many people believe, because the story has been told over and over again. Nevermind that there are obvious flaws—the first lionfish off the coast of Florida was actually spotted 7 years earlier, for example. Also, genetic studies have found more than six unique maternal signatures. But a new study in PeerJ puts this legend to rest once and for all. Armed with population genetics theory, Jason Selwyn and his colleagues modeled the invasive population under different scenarios to estimate the number of introduced lionfish needed to end up with the genetic diversity seen today. According to their analyses, even if the tale is true, six lionfish don't even come close to making a difference. That's because it took dozens, maybe even hundreds of lionfish to invade the Atlantic. A Numbers Game All invasions begin when an animal is transported from the land of their ancestors into a new world. But one animal isn't usually enough—that animal also has to have a mate. And then their offspring must successfully have offspring, and so on and so on. During the early days, pioneers are vulnerable. One ill-timed rock slide or simply unlucky genetic disease could easily snuff out a potential colonization event. That's why invasions are rarely begun by a single couple. Based on a species' life history traits—what age it matures, how often it breeds, how many offspring it has each time, etc—and population genetics theory, scientists can model how different starter populations may fare over time in a probabilistic manner. So, they can ask what is most likely to happen over some number of generations if a few individuals colonize a new area. And from this kind of data, they can calculate the reverse, too—to end up with what you have now, what was the most likely size of the founding group? That kind of modeling estimate is what Selwyn and his colleagues from Texas A&M University—Corpus Christi did. Using what scientists know about the genetics of lionfish in the Indo-Pacific and the life history traits of the animals, they estimated how many lionfish are most likely to have led to the invasion. And they varied the scenarios to get a range of estimates—in some, they accounted for Allee effects—the natural way that small populations tend to be hampered. And they varied things like how likely an individual fish is to survive and reproduce, or the number of juveniles versus adults. In the most generous scenario—assuming that all the fish were breeding adults, that they did not suffer much from being a little group, they bred like champions, and that the starting population was more diverse than we currently think—they estimated that the bare minimum number of colonizing female lionfish was 24. More realistic estimates suggest 44, 59, or even 136 females. And the more females, the less likely it is that they all mated with a lone male. So if you assume each had their own mate, the most likely starting population was anywhere from 48 to 272 fish total. And the upper estimates say that number could be as high as 950!

Moral of the story: don't release your pets, even if they're this beautiful. Especially if they're this beautiful. (Credit: Tjasa Car/Shutterstock) Given those numbers, the authors conclude that the aquarium trade is still responsible for the invasion—but it wasn't a single Floridian. Instead, a combination of large and small releases most likely caused this invasion. And that story makes much more sense. When aquarium industry took off in the '70s and '80s, it's not hard to believe that novice hobbyists got a little overzealous. But they soon realized these pretty fish were troublesome to care for: they eat just about anything they fit into their mouths (including your most expensive piscine pets!), and their venomous spines are not fun to run into while cleaning tanks. So, they got rid of them. And since killing the animals seemed cruel, many simply let them go. Most probably had no idea the animals didn't belong in the Atlantic. By trying to be kind, they accidentally introduced a monster. A beautiful monster, for sure, but a monster none the less.