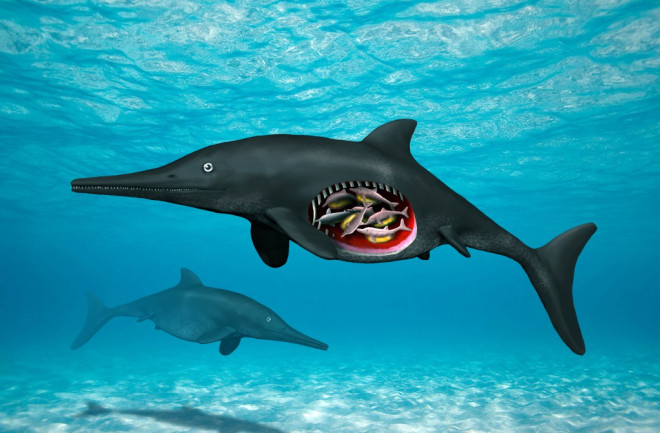 A newly described ichthyosaur fossil was found with up to eight offspring still in utero. (Credit Nobumichi Tamura) Dinosaurs may hog the Mesozoic spotlight, but some of the neatest finds of recent note in paleontology come from under the sea: a very pregnant ichthyosaur and the partial remains of another that was a supersized specimen (think blue whale territory). A quick ichthyosaur refresher: these marine reptiles show up in the fossil record and explode in size and number during the Triassic, get smaller but are still plentiful in the Jurassic (201-145 million years ago) and then die out during the Cretaceous, millions of years before the mass extinction that offed the dinosaurs. Though the earliest ichthyosaurs were more slithery sorts, as they evolved they developed a basic built-for-speed body shape while at the same time diversifying into different species that specialized in various niches (although determining exactly how many species of ichthyosaur there were remains a point of contention). Researchers are not yet certain where ichthyosaurs sit on the great Family Tree of Life, though they were definitely not dinosaurs. At various times, snakes and turtles have been proposed as their nearest living relatives. And though very fishy in body type for most of their history, ichthyosaurs never developed gills — instead, they breathed air like modern whales and dolphins. Another fun fact: a number of fossils of pregnant ichthyosaurs have turned up, documenting that the animals were viviparous, giving birth to live young rather than laying eggs. Which leads us to one poor mom-to-be ichthyosaur whose fossilized remains were found in Yorkshire, in northeastern England, coincidentally not that far from Whitby Abbey, which provided some of the atmospheric inspiration for Bram Stoker's Dracula. This particular ichthyosaur is notable for its age — at about 180 million years old, it's the youngest ichthyosaur ever found in the UK with babies on board. And about those babies: Researchers have identified at least six (and as many as eight) younglings in the partial specimen. It's one of the largest, uhm, litters preserved for posterity in the marine reptiles (specimens in Germany have been found with as many as 11 young still in utero). Formal description of the find was recently published in Proceedings of the Yorkshire Geological Society, but if you're anywhere near York you can check the fossils out at the new Yorkshire's Jurassic World museum exhibit. Living Large Meanwhile, a separate study out today in PLOS One tells a much bigger ichthyosaur story: A partial jawbone from the other side of England — specifically the Somerset coast, in the southwest — appears to be evidence of one of the largest animals ever to grace Earth with its presence. After a fossil hunter spied a piece of bone in 2016, subsequent investigation of the area turned up additional pieces that paleontologists then matched most closely with North America's Shonisaurus, at 21 meters (nearly 70 feet) the largest ichthyosaur known (so far).

Artist rendering of the ichthyosaur Shonisaurus in life and its skeletal reconstruction. (Credit Nobumichi Tamura and Scott Hartman) Given that researchers have only a few pieces of the lower jaw, they cannot definitively say whether the new ichthyosaur is also Shonisaurus, or just a similar but separate species. They also can't determine how big this big guy was, but the jawbone appears to be about 25 percent larger than that of Shonisaurus...if its jaw-to-body proportions are the same, it could be 25 meters (about 82 feet) long, putting it in the same category as the blue whale, currently the largest animal on the planet. While analyzing the new find, researchers compared the partial fossil with other fragments collected in the 19th century from Gloucestershire, the next county north of Somerset. The material came from the famously fossiliferous Aust Cliff, and, like the Somerset specimen, is from the Late Triassic's Rhaetian Age, about 201-208 million years ago. Over the decades, the partial Aust Cliff bones have been described as limb bones of a number of different dinosaurs and reptiles. According to today's paper, however, it appears the Aust Cliff finds are most similar in shape and size to the Somerset partial jawbone. All of the fossils, from both sites, have now been tentatively identified as belonging to the surangular, a part of the lower jaw in ichthyosaurs and other vertebrates, making them the largest ichthyosaurs found in the United Kingdom and, potentially, the world.

There's nothing icky about ichthyosaurs, among the most common and diverse Mesozoic marine reptiles. (Credit Nobumichi Tamura)