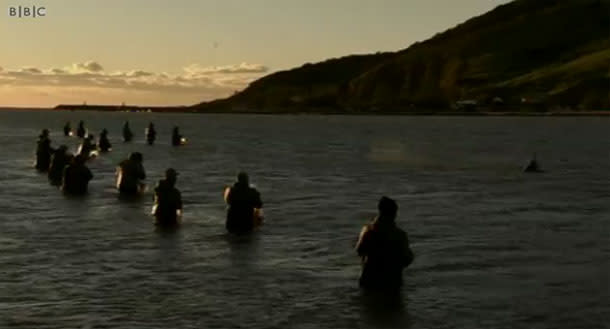 In the coastal waters of Laguna, Brazil, a shoal of mullet is in serious trouble. Two of the most intelligent species on the planet – humans and bottlenose dolphins – are conspiring to kill them. The dolphins drive the mullet towards the fishermen, who stand waist-deep in water holding nets. The humans cannot see the fish through the turbid water. They must wait for their accomplices. As the fish approach, the dolphins signal to the humans by rolling at the surface, or slapping the water with their heads or tails. The nets are cast, and the mullet are snared. Some manage to escape, but in breaking formation, they are easy prey for the dolphins. [embed width=”610”]http://youtu.be/sVinWYmu5lQ[/embed] According to town records, this alliance began in 1847, and involves at least three generations of both humans and dolphins. Today, there are around 55 dolphins in the neighbourhood, and around 45 per cent of them interact with the fishermen. Now, Fabio Daura-Jorge from the Federal University of Santa Catarina, Brazil studied Laguna’s dolphins to learn how their unusual collaboration has shaped their social networks. He spent two years taking photographs of the local dolphins, and noting where they travelled and who they were associated with. As is typical for bottlenose dolphins, the Laguna individuals formed a ‘fission-fusion’ society – they all belonged to the same large group, but they had specific ‘friends’ whom they would spend more time with. The dolphins roughly split into two separate groups, based on their tendency to hunt with humans. Those that co-operated with the fishermen were more likely to spend time with each other than the uncooperative individuals. Likewise, the uncooperative dolphins showed a tendency to stick to their own clique. One individual even seemed to act as a “social broker”, and spent time with individuals from both groups. Of the two groups, the human-helpers seemed to form stronger social ties. It is not clear if helping humans means they spend more time together, or vice versa. But certainly, their close associations increase the odds that one dolphin will learn the hunting technique from its peers. This fits with what we know about bottlenose dolphins. They are extremely intelligent animals and different populations have developed their own quirky foraging traditions by learning from one another. Some use sponges to guard their snouts when they root about the ocean floor for food. Others can prepare a cuttlefish meal by sequentially killing and stripping them. Daura-Jorge now wants to understand why only some of the dolphins help the fishermen, given that doing so clearly provides them with benefits, and all of them have the opportunity to help. By analysing the dolphins’ genes, he hopes to piece together their family trees, and work out if mothers pass on the behaviour to their calves. Reference: Daura-Jorge, Cantor, Ingram, Lusseau & Simoes-Lopes. 2012. The structure of a bottlenose dolphin society is coupled to a unique foraging cooperation with artisanal fishermen. Biology Letters http://dx.doi.org/10.1098/rsbl.2012.0174Bonus: There are several cases around the world where dolphins feed on the discarded remains of fish thrown away by humans. But the Laguna animals do far more than that – the fisherman wouldn’t catch any fish at all without their help. A similar alliance takes place half a world away in Burma, where Irrawaddy dolphins also fish cooperatively with humans. More on dolphin behaviour: