Dogs Think Like Babies, While Wolves Think for Themselves 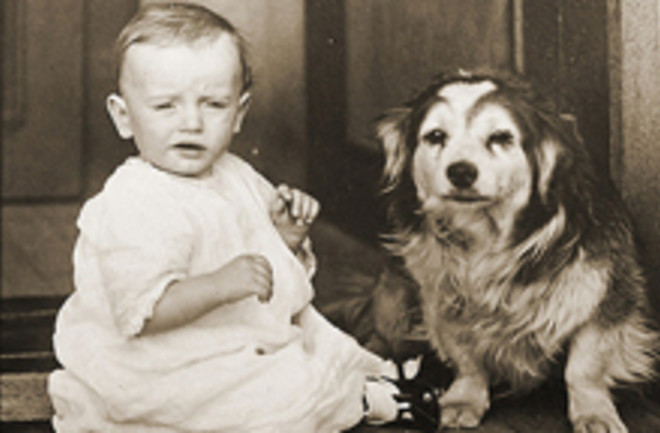 It may not come as much of a surprise to dog-owners, but it seems that dogs and babies share similar logical abilities, as shown by a study published in Science. Experimenters started out with a classic logic experiment, which goes like this: researchers hide a toy in location "A" multiple times while looking at a 10-month-old baby

and talking to him ("Look, I have this nice ball!"). When asked to find the toy, the baby always goes to location "A." The experimenter then hides the toy at location "B," again while interacting with the baby. But this time, when asked to find the toy, the baby continues to search for it at location "A." The findings hold, even when a team changes experimenters midtest. Researchers believe that infants make this error because they believe the adults have taught them something fundamental about the world (i.e., "Your toy will always be at location 'A'") [ScienceNow].

When researchers performed the same test with dogs, the canines also consistently searched for the toy at location "A," even after they saw the experimenters hide it somewhere else. On the other hand, wolves that were raised by hand and strongly socialized ...

easily followed the evidence of their eyes and located the object in Box B [LiveScience]. Researchers hypothesize that dogs erroneously sought the toy in location "A" because they were following the orders given by the experimenter.

The differences between the dogs' and wolves' behavior might stem from the domestication of man's best friend by humans starting around 10,000 years ago. Says study coauthor Adam Miklosi:

"I wouldn't say one species is smarter.... If you assume an animal has to survive without human presence, then wolves are smarter. But if you are thinking that dogs have to survive in a human environment where it's very important to follow the communications of humans, then in this aspect, dogs are smarter" [LiveScience].