Do lost people really go round in circles?

In 2007, Jan Souman dropped three volunteers into the Sahara desert and watched as they walked for several miles, in an attempt to walk in a straight line. Souman was interested in the widespread belief that lost travelers end up walking in circles, a belief that has never been properly tested but has nonetheless become firmly entrenched in the popular consciousness. Just think about Frodo and Sam's hike through Mordor or the three hapless teens in the Blair Witch Project.

To see how non-fictional humans would fare, Souman tracked a group of volunteers using GPS as they walked through a thick German forest or a featureless Tunisian desert, as well as others who strolled through a large field blindfolded. The result: they did indeed go in circles but with no preference for any direction and only when they couldn't see or when the sun or moon weren't visible.

It seems that with some sort of reference point, we're entirely capable of walking in a straight line, even in a featureless desert where dunes obscure the horizon or a busy forest that's riddled with obstacles. The sun's good enough for these purposes, even though it's position changes as the hours pass. Without any such cues, we quickly veer off course.

The two volunteers who walked through in the forest on a sunny day managed to keep to a perfectly straight line, wandering only in the first fifteen minutes when the sun was behind a cloud. The four people who walked on much cloudier days all ambled in circles, repeatedly crossing their own path without knowing it. The desert walkers fared about as well - those who walked during the heat of the day veered slightly but kept reasonably straight. A third man walked at night; he too kept a direct course when the moon was visible but when it vanished behind clouds, a couple of sharp turns sent him back in the direction he came from.

Scientists have put forward many explanations for the circular rambles of lost walkers. Some say that most people have one leg that's longer or stronger than the other and over time, these differences add up to a curving course. Others say that asymmetries in our very brains set up a tendency to turn in one direction. Without a guiding light or landmark, these small biases would make their presence felt.

But Souman thinks otherwise. He set a group of 15 blindfolded people loose in a large field, told them to walk straight ahead and watched them for 50 minutes. All of them walked in very random paths, including large flamboyant loops and, on occasion, surprisingly small circles of as little as 20 metres in diameter (little enough to fit within a basketball court). 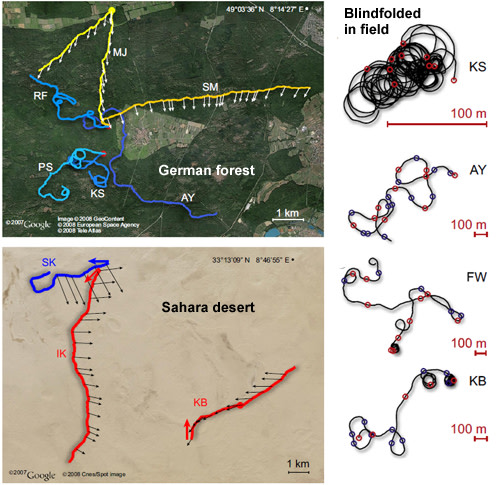 Only three of the 15 people consistently veered in one direction and they did indeed go round in circles; the others walked more chaotic paths. On the whole, their meanderings had no consistent bias and they would turn one way as often as the other. Indeed, one of the volunteers, known only as KS, took part in both experiments and while he had the strongest directional bias while blindfolded, he actually veered in the opposite direction in the forest.

That strongly argues against the influence of asymmetric legs or brains. Souman certainly ruled out the leg hypothesis by showing that the relative strengths of his walkers' legs didn't relate to the average direction of their turns. He even X-rayed the legs of one of his recruits to measure their length and then evened things up with shoes of varying soles. They made no difference to his path.

So without landmarks to guide them, the walkers were relying on feedback from their bodies (proprioception) and their sense of balance. These cues can help over short distances, but Souman says that they soon build up "sensory noise" that renders them inaccurate and causes the person's trajectory to drift both increasingly and randomly.

It's telling that the blindfolded walkers in the open field behaved in very similar ways to the ones in the cloudy forests - their jaunts included bouts of random direction interspersed with systematic circling. This may have been because of all sorts of obstacles or local landmarks in the forest, but not so in the field.

Instead, Souman suggests that people circle when their internal sense of "straight ahead" becomes corrupted by random errors in their sense of touch, balance or spatial awareness. Small errors lead to random walks, while larger errors cause circling. And that has a massive impact on their ability to get, well, anywhere.

Despite walking for 50 minutes, most of these people never made it very far. Within a few minutes, their average distance from the starting point levelled off so that they were usually around 100 metres of it. A visual cue, however, can do wonders for resetting our navigation. If Souman allowed his blindfolded bumblers to lift their blindfolds for a minute out of every five or ten, they managed to recalibrate their sense of "straight ahead" and started each block of time in a straight line again.

As Souman himself concludes, "Ironically, in the age of ubiquitous navigation systems in airplanes, cars, and even mobile phones, we are only beginning to understand how humans navigate through their environment, exploring uncharted terrain." His study shows that even the simple act of walking in a straight line is more complex than it might first appear.

Reference: Current Biology doi:10.1016/j.cub.2009.07.053 Can't find the paper? Be patient - most journals have a few hours' delay between the lifting of press embargoes and the publication of papers. For PNAS, this can be up to a week.

A 6 kilometre trek on the back of a snail

How sharks, penguins and bacteria find food in the big, wide ocean