Many species of non-human animals end their lives through self-destructive or accidental behaviors. But whether it’s an act of suicide is a controversial question. 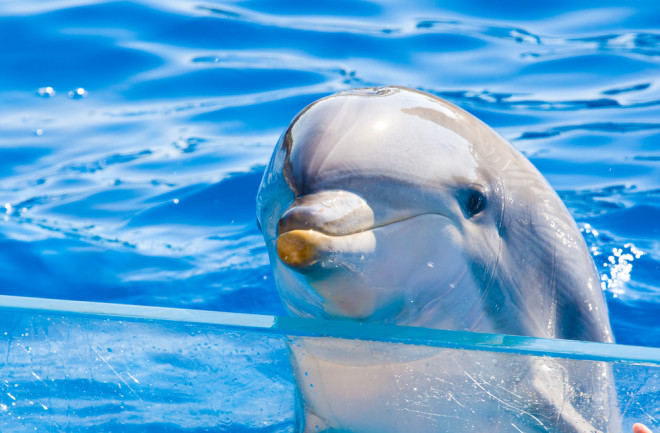 In April 1970, Ric O’Barry visited a dolphin named Kathy at the Miami Seaquarium, where she was languishing in “retirement” after three years as the title character on the television show Flipper. O’Barry, who had captured her from the wild and trained her to perform, remembers thinking that she seemed depressed. She was all alone in a concrete tank — not a good thing for a highly social animal like a dolphin. He claims the former cetacean starlet swam into his arms, sank to the bottom of the tank and refused to resurface, drowning herself.

This is a tantalizing anecdote — tragic, moving, and evocative of the plight of dolphins and other highly intelligent animals in captivity. As O’Barry tells it, the event motivated him to pursue a life of activism. He has devoted his career to advocating on behalf of marine mammals, most famously in the 2009 documentary The Cove, which exposed the annual slaughter of some 2,000 dolphins in Taiji, Japan.

But is it true? Are non-human animals actually capable of purposely ending their own lives?

What Exactly Is Suicide?

It’s a complicated question, made even more so by the fact that we don’t fully understand the complexities of why humans kill themselves. Risk factors for human suicide are still indeterminate and suicide behavior disorder was listed as a “disorder for further consideration” in the American Psychiatric Association’s Diagnostic and Statistical Manual of Mental Disorders, 5th Edition: DSM-5. Even the parameters of what constitutes suicide in humans are debated — this is as much a matter of philosophy and semantics as it is of biology and psychology.

Are kamikaze pilots and “suicide bombers” true suicides, for example? They typically don’t exhibit the psychopathologies of those who commit suicide and are motivated more by political or religious reasons than by a true desire to die. Is suicide a choice in the traditional sense of the word or is it the consequence of a pathological state? This is a key point if we are to attribute it to animals, whose capacity for choice differs from our own due to our unique ability to synthesize past, present, and future.

The correlation of suicide to Severe Mental Illness (SMI), the hypothesis that suicidal tendencies may be heritable, and the controversial claim that antidepressant drugs may increase suicide risk in young people suggests that it might not be a choice in all instances, at least if choice is conceived as a rational decision made in a stable frame of mind. That being the case, ought situations in which people choose to end their own lives in the face of terminal illness — arguably a rational decision — be referred to using the same term? What exactly is suicide?

And while our knowledge of animal consciousness is ever-increasing, is the claim that certain animals not only suffer, but are aware of the concept of death and able to plan for their own sufficiently supported? We do know that animals possess varying degrees of self-awareness, experience depression, anxiety, and other mental illnesses, are capable of self-destructive behaviors, have some concept of death, at least in other animals of the same species, may even grieve, and are probably able to plan for the future in some cases.

Still, detractors of the notion that animals can suicide dismiss the idea as anthromorphism — the attribution of human qualities to something non-human. Just because a dolphin seems depressed and doesn’t surface to breathe doesn’t mean that it has chosen to kill itself. Skeptic C.A. Soper, author of The Evolution of Suicide, thinks instances like Kathy’s death “say more about the observer than the observed.”

Those who argue for the possibility of animal suicide — most are quick to note that they are not certain it happens — call this “anthropo-denial.” That is, they think prima facie dismissal of the possibility that animals might think and act in ways perceived as uniquely human is too hasty. They maintain instead that these capabilities ought to be viewed on a spectrum. While animal grief — or depression or joy or anger — might not manifest in the same ways it does in humans doesn’t mean it isn’t real. So it is with suicide, they insist.

“We need to learn to sit with that: not knowing for sure either way and adopting a position of what I call epistemic humility. We need to be open to the possibility that we cannot rule it out,” says David Peña-Guzman, a professor of philosophy at San Francisco State University and author of a 2017 paper on the subject. The article, published in the journal Animal Sentience, was accompanied by a variety of responses from other experts in the field, who variously objected to and supported his claims. Peña-Guzman authored a follow up that addressed his critics in 2018.

“The funny thing was the critics realizing that they actually disagreed with each other,” he recalls. Indeed, the question is profoundly complex and affirmative evidence rests mainly on singular observations and inference rather than empirical evidence. Interpretations vary accordingly. Jane Goodall memorably recounted the death of one of her chimpanzee subjects, Flint, who seemingly lost the will to live and died a month after the death of his mother Flo in Gombe National Park in Tanzania. Similar instances have been noted in dogs and elephants. These are startling observations to be sure, but are they suicide in the sense we would use it to describe a human death? Even in cases in which the victim is under extreme duress or mentally unstable, we typically think of suicide as having some element of intent. We can’t prove that Flint intentionally starved himself — it’s simply unknowable.

“I think it's sort of like dark matter,” says one of the respondents to Peña-Guzman’s paper, Ryan Hediger, who researches animal studies and teaches English at Kent State University. “There are behaviors out there that we just haven't seen enough to really be able to interpret.”

Some self-destructive behaviors in the animal kingdom, it’s worth noting, are almost certainly not suicide in any meaningful sense of the word. Ants and aphids will explode when approached by predators, benefiting their conspecifics. And some bee species abandon their nests when parasitized by flies in order to protect their colony. Though research on invertebrate sentience has indicated that insects might be able to feel pain, for instance, these behaviors are almost certainly instinctive and not motivated by individual decision making. So, too, the apparent suicides of lemmings who throw themselves from cliffs are more likely an accidental consequence of overpopulation than a conscious leap into the abyss.

Others are far more ambiguous. Famed field biologist George Schaller recounts an instance where a water buffalo, maimed by lions, had escaped and returned to its herd. Then, inexplicably, it left the safety of its group and allowed the lions to finish the job. Did it intentionally allow its predators to end its life, knowing that it could not survive the injuries they had inflicted? Or was it motivated by something else entirely — delirium or a desire to draw predators away from its group?

Another case cited in the animal suicide literature is equally subjective in its interpretation. In her 2013 book How Animals Grieve, Barbara King relates the story of a mother bear who, along with her cub, was subjected to the brutal practice of bile milking. In this procedure, which is largely carried out in Asian countries, catheters are inserted into bears in order to extract bile — traditionally believed to have medicinal properties. The mother bear supposedly broke free of her restraints, smothered her cub, and then smashed herself into a wall, ending her own life. That this animal intentionally killed her offspring and then herself in order to escape a miserable existence does not seem terribly plausible. More likely, she panicked or had been driven to a frenzied state due to the torturous conditions she had been subjected to.

Cases like these illustrate the major challenges in assessing the possibility of animal suicide. An animal would have to have a sense of self, an understanding of what death actually means, and the ability to execute a series of actions that it knew would lead to its own death. There is some indication of the former two capacities, but the latter is indiscernible. The fact that dolphins and some primates appear to engage in mourning for their dead is probably not sufficient to indicate that they actually understand and are able to facilitate their own mortality.

Even assuming that observers like O’Barry and Goodall have correctly judged that their subjects had some knowledge that they were ending their own lives, there remains a question of definition. Do acts like ceasing to eat or breath, however self-destructive, actually qualify as suicide?

Peña-Guzman thinks they might, in a sense. “There is a question in the human psychology literature about whether suicide includes only active cases of self-destruction, or whether it also includes cases of passive suicide,” he says. “And I prefer the more inclusive definition, which would describe a case like Flint’s.”

“Much of the confusion about animal ‘suicide’ arises from unhelpful definitions,” counters Soper. “Those who argue that nonhumans do or could ‘commit suicide’ have to start with a definition of ‘suicide’ so sweeping that almost any arguable self-harm could be counted.”

“Suicide in [the conventional sense] is relatively uncontroversial to define: the intentional taking of life after some kind of reflective judgment that it is no longer worth living,” adds John Hadley, who specializes in animal and environmental ethics at Western Sydney University. “When the concept at issue is defined in that straightforward way, and when we consider whether, as a matter of descriptive or scientific fact on the basis of available evidence, animals can commit suicide, then I think we have to say no.”

Others who question the possibility of animal suicide point to the rarity of suicide among preadolescent children and those with developmental disabilities. Even the most intelligent nonhuman animals do not exceed the intellectual capabilities of a teenage human, begging the question of whether they have the capacity to meaningfully conceptualize their own mortality — let alone execute it.

“If human toddlers cannot wrap their minds around the idea, then animals who are not nearly so smart probably cannot either,” Soper says.

It’s conceivable that suicide in animals might be experimentally proven — but the costs of such an endeavor would of course be ethically prohibitive. Intentionally driving an animal to a state in which it might consider suicide violates even the most generous constraints of animal experimentation. That is not, of course, to imply that it might not be attempted.

In the meantime, we are left to ponder a suite of largely unanswerable questions. Is it more parsimonious to allow for the possibility of animal suicide or to reject it? It’s nearly impossible to say. But given the astounding discoveries in the realm of animal consciousness in recent decades, further insights are sure to come.