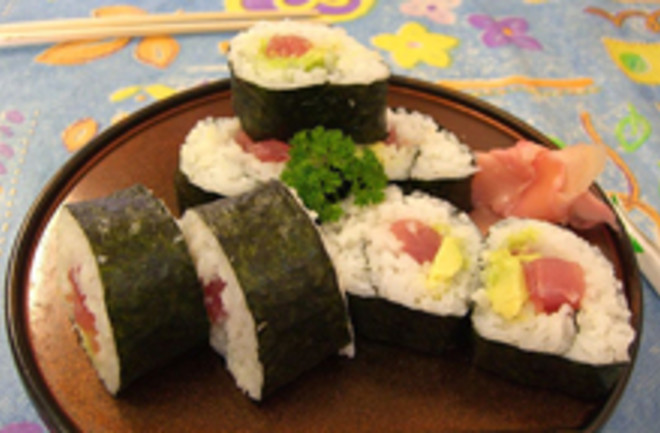 Sushi lovers, we've got some bad news. For a study that came out in PLoS One, researchers ordered sushi at restaurants across New York City and Denver, Colorado, and found that an alarming percentage wasn't made from the fish it was advertised to be. More than half of the eateries weren't completely clear and honest about the fish they offered, the study says. Some even mistakenly served up escolar, which can give people diarrhea and stomach problems.

Although their results were shocking, exposing sloppy sushi joints wasn’t their main goal. The scientists were trying to improve on a new species-identification technique, called DNA barcoding.... Their goal is to build a catalog of every fish species on earth so that anyone with a handheld DNA reader could definitively identify fish within minutes [Wired.com]

. One reason researchers investigated sushi is that so much of it has been made from endangered species like the bluefin tuna. In the restaurants that lead scientist George Amato checked out,

the device showed 25 percent of what was labeled as tuna on sushi menus was bluefin, Amato said. The device also has been used to identify the presence of endangered whales in Asian markets and fraud in the labeling of caviar and red snapper [UPI]

. This study comes in the wake of an international ruling that reduces the quota for bluefin catch from 22,000 metric tons annually to 13,500 for 2010. But that isn't enough for many environmentalists, nor for The New York Times editorial board, which this weekend called for the United States to list bluefin under the Convention on International Trade in Endangered Species.

The law effectively bars commercial trade in any listed species, and has been helpful in protecting other animals like elephants and whales [The New York Times]