Roman citizens came from Europe, the Mediterranean, Africa and beyond. The ancient metropolis was a bone fide melting pot. 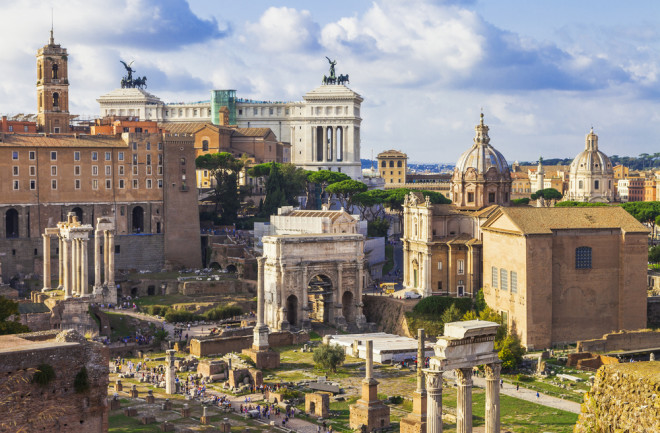 A new collection of DNA from ancient Romans spanning 12,000 years shows how the population of the empire’s capital shifted along with its politics. Published in Science, the timeline is one of the first to examine what genetic information from archaeological digs says about the region after the time of hunter-gatherers and early farmers.

The analysis found that ancient Romans were from all over Europe, the Near East and northern Africa. “Rome was a cosmopolitan, melting-pot kind of place,” says study coauthor Jonathan Pritchard, a geneticist at Stanford University. “It doesn’t match how most people think about ancient cities.” It wasn’t until about 3,000 years ago that the inhabitants of Rome started to genetically resemble modern residents.

So far, most studies of ancient European DNA — genetic material extracted from archaeological remains — have looked at earlier populations, like hunter-gatherers, Pritchard says. He and his collaborators wanted to see how more recent peoples, like those from the Roman empire, compare to our historical view of them.

The team collected remains from 127 individuals from 29 different archaeological sites in and around Rome — the oldest were from around 10,000 B.C. After crushing a small portion of each samples’ inner skull bones, the team extracted and sequenced DNA from the material. Putting the genomes in chronological order showed how the population of Rome changed over time.

The earliest samples collected from the region showed local hunter-gatherers resembled other, more western Europeans. About 7,000 years ago, the region saw its first demographic shift as farming began and people of Iranian ancestry started mixing into the population. Then, after the Iron Age kicked in, more individuals from the eastern European steppe region appeared. Both of these population trends are similar to what happened in Europe during those times, Pritchard says.

As Rome grew and the Iron Age began, their data also showed that people of different ancestries from around the region started living closer together, Pritchard says. This shift makes sense, Pritchard says, as the era brought better transportation that made sailing around the Mediterranean more common.

Then, starting about 1,700 years ago, the empire entered a phase of gradual dissolution. The Roman empire split in two halves and the capital moved to Constantinople. Around this time, the inhabitants of Rome changed their trading habits — and the new trade routes seem to have brought a fresh influx of ancestry into the region, Pritchard says. “People aren’t just trading with the north and the west, but their population is being replaced by new people coming in from those places.”

Seeing that the ancient DNA matched historical and political accounts so well was a pleasant surprise, Pritchard says, as some of these shifts happened in relatively short periods of time. And though the team is confident in their results, they’d like to have more information about the genetic makeup of the locations they suspect fed into Roman diversity.