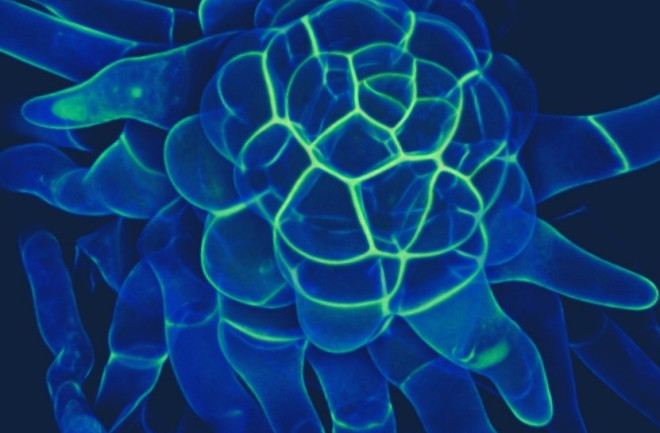 Stem cells at the tip of a Physcomitrella moss shoot split and multiply in a spiraling pattern, letting the plant go beyond the two-dimensional growth of its algae ancestors. (Credit: Jill Harrison, University of Bristol)Plants dominate life on Earth, making up more than 80 percent of biomass as measured in gigatons of carbon. On land, plants today boast a wide range of complex shapes, from stout baobab trees to winding ivy, but they all evolved from a simpler past. Land plants trace their roots to aquatic algae that were limited to pretty much two options when it came to structure: stringy or flat. But somewhere along the way, these early plants learned to grow in a multitude of shapes to adapt to life outside water.It all comes down to how plant cells multiply. Algal cells split and grow either in a straight line or a flat plane, but land plants’ cells can split and grow in any direction. This adaptation let them flourish in all sorts of environments on land.

A paper published Thursday in

describes how plant scientists identified a mechanism that lets the cells of land plants multiply in any direction. By removing some genes from a moss species and watching its early growth, they saw that the moss struggled to duplicate cells in the usual spiraling pattern that let it grow in three dimensions. The researchers found the same genes in flowering plants but not in algae, which implies that the mechanism might be responsible for the evolution of three-dimensional growth in land plants.

Plants grow by splitting and duplicating cells known as stem cells, often at the tips of roots and shoots. In simple algae, the cells divide in only one dimension, producing stringy filaments, or in two dimensions, producing flat mats. Picture a brick wall that’s only one brick thick, so you only place bricks on top of or next to each other, but not in front or behind. In land plants, a stem cell at the tip of a shoot can split first in one direction, then in a second direction at about a right angle to the first, then a third direction at roughly a right angle again, and so on. This lets a plant grow an upright stem with leaves sprouting from multiple sides. Where before you could only build a brick wall, you can now build houses, towers, and all the other variations that three dimensions offer. Plant biologist Jill Harrison and her team want to understand how land plants evolved to do this. This is where moss enters the picture. “Algae have this sort of filamentous or planar form, and moss starts out growing like that. And then a few weeks in it starts to initiate these 3D shoots,” explains Joseph Cammarata, a plant biologist and one of the study’s first authors. “So by making that transition, it’s sort of like an example of what happened during evolution.”To find what might be responsible for making the mosses sprout in 3D, the team grew mutated versions that had certain genes modified. They found what they were looking for in a particular peptide, or small protein-like molecule, called CLAVATA and the cellular signaling system it’s a part of. When moss plants didn’t have a properly working CLAVATA system, they weren’t able to duplicate in a spiraling pattern — opting to keep splitting more or less in one direction rather than transition to three-dimensional growth. “They do try to transition, but they mess it up really badly,” Cammarata says. This was a strong indicator that CLAVATA was responsible for controlling three-dimensional growth in some way.

Chris Whitewoods, a plant biologist and the study’s other first author, was thrilled to see the mutant mosses struggle. “I remember seeing it for the first time under the microscope and just being so excited, because it was about the best thing you could ever dream of happening,” Whitewoods says. Though CLAVATA has been studied by plant scientists for decades, this was the first time it, or any other cellular signaling system, has been found to affect the direction of stem cell splitting and growth. The researchers duplicated their work in thale cress, a flowering plant. The fact that CLAVATA affects the direction of cell splitting in species as different as a moss and a flowering plant, and doesn’t exist at all in algae, is another big clue that it, or something similar in plant DNA, may have played a role in getting aquatic plants onto land. The scientists continue to investigate how plants have come to grow in three dimensions. Cammarata is delving deeper into this project in his graduate work. Whitewoods is pursuing a separate, but related, mystery of three-dimensional plant growth — how carnivorous, insect-trapping plants grow cup-shaped structures from flat ones. “It’s a similar question of how to go and make a complex three-dimensional structure, but a very, very different context,” Whitewoods says.