We don't have enough scientists on the planet, enough money, and enough time using traditional methods to understand the millions of genes we're uncovering 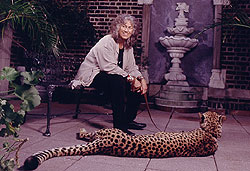 In 1998 J. Craig Venter burst into the public consciousness with the audacious announcement that his new company, Celera Genomics, would mount a rival effort to the $3 billion 15-year Human Genome Project spearheaded by the National Institutes of Health (NIH). Venter said his private company would beat the public effort by four years, finishing in 2001 instead of 2005. After a bitter rivalry, the two projects completed rough drafts of the genome in the summer of 2000. President Bill Clinton presided over a ceremony that declared the race a tie. Venter was criticized by the public project scientists, led by Francis Collins, for planning to profit from the data. Venter later released the information free. Since leaving Celera in 2002, the former California surfer and Vietnam War medic founded the J. Craig Venter Science Foundation, which funds two projects he is working on—one to create new life in a laboratory, the other to catalog as many genes as possible during an around-the-world ocean voyage on his yacht.

Were you good at science when you were young?

V: I was bored with school. I refused to take spelling tests because I thought it was really stupid to memorize words only to regurgitate them on a spelling test. As a result, I can’t spell very well today. Then what I saw in Vietnam as a medic was a direct correlation: When I had specific knowledge, I could save people’s lives. I was planning on going into medicine, but when I got to the University of California, I started making major science breakthroughs and published my first paper as an undergraduate. I just found it so thrilling and intellectually rewarding that I gave up on the idea of medicine and stayed in science.

What were your motives for sequencing the genome?

V: I learned of the genome project in the mid-1980s, well after my lab was the first in the world to do automated DNA sequencing. The two obviously went together extremely well. It was just such a big grandiose idea that I fell in love with it immediately. I came under a lot of attack very, very early. A lot of people would have given up.

You left the NIH in 1991 after James Watson, then the director of the Human Genome Project, rejected your ideas for speeding up the sequencing of the genome. What if Watson had embraced your work?

V: I probably would have stayed. I really liked being at the NIH. One of the ironies here is that had Watson not been so vehement in his attacks, it wouldn’t have made the press. When I was being attacked by Watson, other people read these stories and got very excited about it and saw the commercial possibilities. I think I pushed him over the edge when I went after the human genome; that was his birthright.

Historically, how big a deal was sequencing the human genome? Was it a Watson-Crick moment?

V: Our publications and the announcement at the White House will be viewed historically as very important moments, but it’s the utilization of that information that will hopefully lead to scientific breakthroughs that will be the important thing. The techniques that were developed to do the Haemophilus genome and the Drosophila genome were the scientific breakthroughs technologically. [Haemophilus influenzae is a bacterium, the first organism to have its entire genome sequenced, which Venter completed in 1995; Drosophila is the common fruit fly, whose genome Venter sequenced as a warm-up to sequencing the human genome.] There have been very few instant cures and very few instant insights. Most scientists are overwhelmed by the data and don’t use it. Yet I think of the early stages of my own career, spending 10 years to find one protein or one gene. And now any student today can do a computer search in minutes. It’s a revolution.

Before your round-the-world trip on your yacht, you did ocean sampling in the Sargasso Sea, off Bermuda.

V: We found at least 1,800 new species and 1.2 million new genes. This doubles the number of all other genes known on the planet. And this was in the Sargasso Sea alone. Wait until we release the data from the global sampling expedition.

But isn’t this just a bunch of data until you analyze it? Scientists still don’t know what to do with the human genome.

V: We collect the data first, and then it will be analyzed. It took Darwin years to analyze his Beagle data before he understood what it meant.

Now you’re on mission to sequence all the genes of every microbe. Why?

V: First off, we’re just trying to get a clear idea of what’s out there. We know less than 1 percent of the biological world. We just published 1.2 million genes from a small sample of ocean water from the Sargasso Sea. The next study that we’re doing right now, we’re probably going to have between 10 million and 20 million genes. These are massive increases over what’s been known. It may be an opportunity to do the first-ever classification system for the genes of planet Earth.

Why are you being criticized for the ocean-sampling project?

V: Most of the ocean is claimed by one or more countries. A lot of politics is building up around this thing. So now we’re evil because we’re putting data in the public domain. A group of people who are following everything we do is putting out a lot of false information. You go on to some Web sites, and they say we’re trying to patent everything.

V: No, and that’s the ultimate irony. We’re doing the stuff and giving it to the world, and now it’s evil because all these poor little countries like Bermuda want to profit somehow from this data. They don’t realize that they can profit from the knowledge. I think people just like to attack what we’re doing because we’re always on the leading edge.

You’re also trying to create a new life-form in a test tube. Why?

V: That’s just one of my major personal projects. It’s driven out of just asking basic science questions. Creating a new life-form is a means of understanding the genome and understanding the gene sets. We don’t have enough scientists on the planet, enough money, and enough time using traditional methods to understand the millions of genes we’re uncovering. So we have to develop new approaches, and I think if we can build synthetic cells and substitute or insert whole cassettes of genes, we can try to understand empirically what the different genes do in developing living systems.

V: It hasn’t been done yet. What we have done is synthesize a virus. That was pretty stunning. Viruses technically are not alive, but there is some stage that’s sort of in between inert and going through a living stage by hijacking the machinery of cells. We envision starting the same way with a synthetic chromosome. We’re going to start by injecting that into a cell whose chromosome we’ve killed to see if it could initially take over the machinery of that cell and go on from there. That may or may not work with living cells.

Your critics say it’s too complicated to build even the smallest bacterium, which is made up of hundreds of thousands of base pairs.

V: I don’t listen to the critics.

What makes you so successful?

V: I take risks. When I came back from Vietnam and was still alive, I was determined not to be afraid to take risks. And I think if anything has characterized the success I’ve had throughout my career, it’s that I’ve taken what most people would consider to be enormous risks. You know, when I left NIH, I was leaving guaranteed government employment and a reasonable research budget for the rest of my life.

How do you feel about the commercialization of biotechnology?

V: That’s why U.S. science is so far ahead of science in the rest of the world. We have companies like New England Biolabs that sell 5,000 different restriction enzymes, and they’ll give you a freezer and deliver them overnight. You go to Russia, you have to grow bacteria, isolate it, and purify it. So you spend six months doing that, and you can do only one experiment with it.

As you’re creating life and sequencing the planet’s genome, are you worried

But you are creating life. What if something goes wrong?

V: Look, I won’t tell you that there are no dangers. That’s why this needs to be done out in the open, with careful people making sure mistakes won’t be made. If scientists as a group were intent on doing harm to society, most of society would probably be eliminated by now. And we don’t need molecular biology to do real damage—look at what has been done by blindly moving species around continents. So I wish science was moving faster. If science is going to play a role in solving some of our social problems and our problems with destroying our own environment, we need to do that pretty quickly so we have a chance of surviving as a species.

What do you think is most misrepresented about you?

V: I’ve had the bizarre situation where the government-funded scientists that I was competing with, instead of just competing scientifically with me, worked very hard to tarnish my personal reputation. It’s hard to understand that process. You know, even years later I still don’t get not only the fact that they did it but also that it was somehow accepted.

What’s the best thing about being Craig Venter?

V: Oh, wow. Well, he can actually get things done. You know, even though I’ve had wonderful teams to work with, I think the success of my career has shown other people that individuals can make a huge difference.