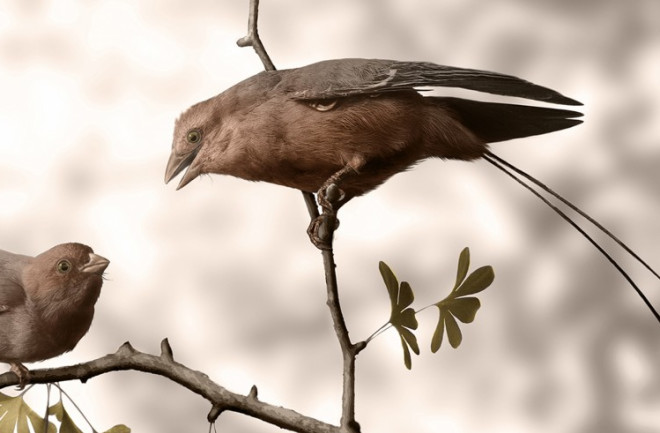 Reconstruction of Confuciusornis sanctus by Stephanie Abramowicz, NHM Dinosaur Institute. Sue is something of a celebrity among dinosaurs, being the best-preserved T. rex fossil ever found. But in truth, the gender of dinosaurs is rarely, if ever, known. A study in 2005 first laid claim to a new way to sex dinosaurs using a distinctive bone formation. Now paleontologists in China have found that ancient birds also had this structure, confirming that birds and dinos shared similar gender divisions and reproductive habits. Researchers excavated the 125-million-year old birds' feathers, organs and bones from petrified lake-bottom mud in northeastern China. These birds, called Confuciusornis sanctus, were buried by the hundreds following catastrophic volcanic eruptions in the Mesozoic era. Some C. sanctus fossils have long, fancy feathers and some don't. Paleontologists have assumed the discrepancy in plumage was gender-based: the males were more decorated in order to attract and woo the drab-colored females, as in many modern bird species. But a new discovery, presented in a study in Nature Communications today, is the first actual proof. This proof comes in the form of a medullary bone---a structure inside the birds' long bones that acts as a temporary calcium bank. It is formed during a short window when the female is reproductively active and stores calcium for the female bird to form eggshells. Birds today, such as chickens, also form this medullary bone, which shows that there are some similarities between the species despite the time difference. But female chickens only lay eggs once they have reached full adult size, whereas the medullary bones showed up in less mature C. sanctus fossils. This shows that ancient birds reproduced like dinosaurs, before they were full-grown. This is the first time paleontologists have been able to figure out the sex of ancient avian species, and it may aid in identifying the gender and reproductive habits of flying dinosaurs too. Which means that someday museums may need to rename their friendly dinos on display.