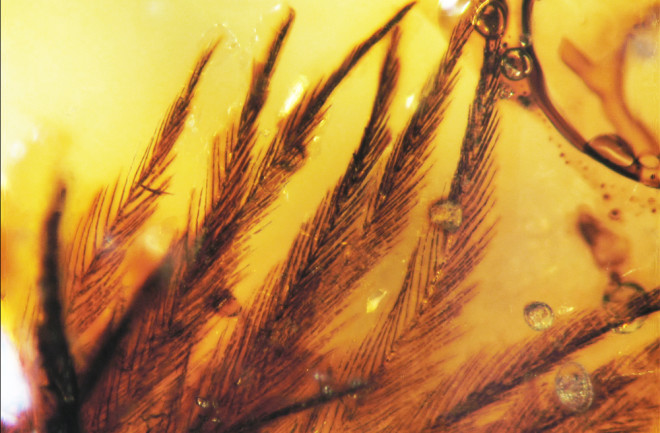 These feathers got stuck in a glob of amber millions of years ago. Image credit: Science/AAAS Instead of digging through rocks and rubble to find fossils, a group of Canadian paleontologists decided to dig through museums' amber collections instead. Their unique approach paid off when they discovered feathers and never-before-seen structures, which they think are something called dinofuzz. As described in Science Now,

Some of the structures embedded in the amber don't resemble anything seen on any creature living today.

The researchers combed through thousands of minuscule amber nuggets from nearly 80 million years ago. Among them they found 11 M&M-sized globules with traces of ancient feathers and fuzz. A number resembled modern feathers---some fit for flying and others designed to dive. And unlike fossils, the amber preserved colors too: white, gray, red and brown.

Tangled in a spider web, this feather suggests that wind could have blown feathers into the still-sticky amber, or they could have gotten stuck when an animal brushed against a tree. Image credit: Science/AAAS But a few hollow hair-like structures stumped researchers. The unidentifiable filaments weren't plant fibers, fungus or fur, so the researchers surmise that they are protofeathers (thought to be the evolutionary precursors to feathers). Discovery News explains:

The collection is among the first to reveal all major evolutionary stages of feather development in non-avian dinosaurs and birds.

The results, published in Sciencethis week, [UPDATE 9/23/13: Not this week! Sorry. This is one from the archives] give researchers a clearer picture of which ancient animals were feathered and the various purposes those structures served. As described in National Geographic:

The unusual find suggests a wide array of plumed creatures populated the time period—sporting everything from seemingly modern feathers to their filament-like forebears—and that even by this early date, feathers had become specialized, for example, for diving underwater.

The amber preserves the feathers' colors like fossils never can. Image credit: Science/AAAS It's unlikely that the amber will have preserved enough DNA to sequence entire genomes, but who knows. Maybe geneticists will again strike scientific gold---er, amber.