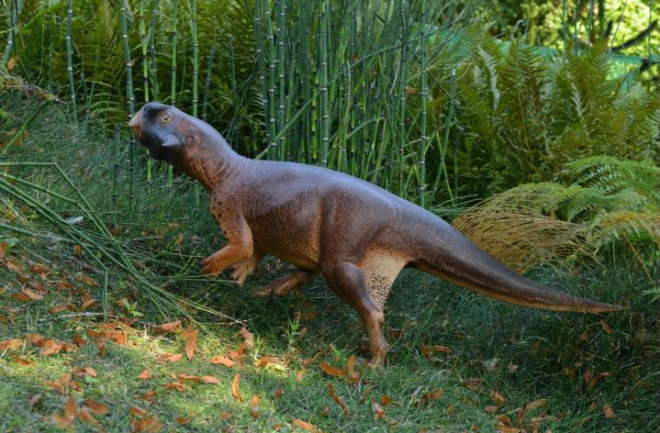 Do you see what I see? This model of a Psittacosaurus of the early Cretaceous might stand out to human eyes, but its coloration was likely an effective defense against predators. Credit: Jakob Vinther, University of Bristol and Bob Nicholls (Paleocreations.com) What do dinosaurs have in common with great white sharks? Other than being awesome? Countershading, that's what. Researchers were able to reconstruct the color patterns on one plant-eating dinosaur from China and discovered it was rocking a look similar to the apex predator of Jaws, but for very different reasons. Countershading — areas exposed to the most light are dark, while those most likely to be in shadow are light — is a common camouflage pattern in many of today's animals, especially among fish and marine mammals. It's called countershading because it seems to run counter to what would be a smart strategy. You might think the lightest parts of an animal would be the areas that get the most light. Nope. Take the great white shark for example: When viewed from below, its pale belly blends in with lighter water nearer to the surface, and when viewed from above, its dark back disappears against the shadowy depths. I say "blends in" and "disappears" with poetic license, because what really happens is that the contrasts of the animal and its shadow are reduced, flattening its three-dimensional shape against its background and making it harder for predator or prey to see it. Enter Psittacosaurus (which I always think of as the Tacosaurus because it's pronounced with the stress on the "taco." Mmm. Tacos). Researchers took a close look at one speciman of the ornithischian dinosaur...actually, they took a close and very fancy look, using crossed polarized light photography and laser-stimulated fluorescence imaging. It's less important to know how exactly these technologies work and much more important to tell you what the researchers found: different patterns of pigmentation emerged thanks to their detection of preserved melanosomes, cellular structures responsible for making and storing melanin.

According to the study, published today in Current Biology, areas of higher and lower melanosome concentration clearly showed the animal had a darker top and lighter underside, with the palest area being the lower abdomen. Okay, so what is a very much land-based herbivore doing with the same camo strategy as a marine apex predator? To find out, the researchers built two life-size models, painting one gray and the other with an approximation of the animal's actual appearance (while the researchers can't say for certain the dinosaur's actual colors, they based the pattern on the preserved clues of the degree of pigmentation on different areas of the body). Carrying the models around with them (Psittacosaurus was fortunately only the size of a large dog), the researchers documented how both the gray and patterned variations appeared in different kinds of light. The gray model acted like a kind of control to see the shadows cast by the animal's contours. What they found was that the patterned model had the optimal placement of light and dark to offer decent camouflage in shaded environments, such as under a forest canopy. In more open settings, however, the patterned Psittacosaurus stood out like a sore thumb...or a delicious meal for some hungry therapod. Based on petrified trees and other finds at the site in China where this particular specimen of Psittacosaurus was unearthed, we know that it lived in, yep, a forest. This is the first time countershading has been confirmed in the fossil of a land-based animal. And, while the research was based on one particularly well-preserved specimen of a single species, it takes us one small step closer to knowing what the Age of Dinosaurs really looked like. By the way, if you read Dead Things regularly, you may have noticed I'm a huge fan of artist renderings of dinosaurs and other extinct animals. If you share my love, check out Paleocreations, the home page of artist Bob Nicholls, who created some of the Tacosaurus images in this post and is a co-author of today's study. Full disclosure: I have no connection, personal or professional, to Bob. I just really appreciate a well-placed lightning bolt.