Dinos Down Under: Titanosaurs in Australia 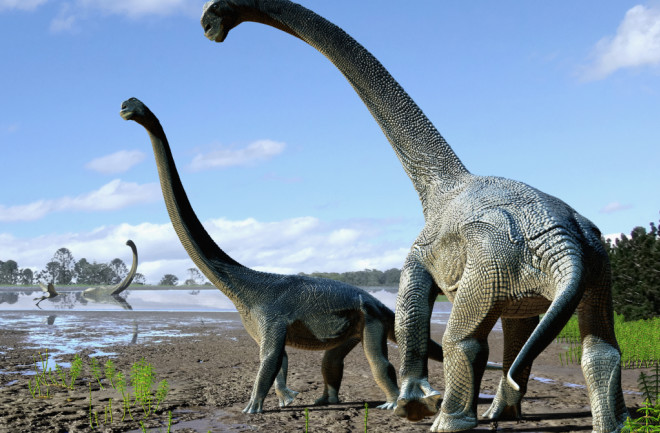 Newly discovered Australian titanosaur Savannasaurus elliottorum goes for a stroll...can you hear, can you hear the thunder? Credit: Travis Tischler/Australian Age of Dinosaurs Museum of Natural History. Meet Wade and Matilda, the newest superstars from Australia: Bigger than the Hemsworth brothers, these two titanosaurs are more than the sum of their fossilized parts. Their discovery helps us piece together how the biggest and brawniest dinosaurs ended up Down Under. Paleontologist Stephen Poropat and colleagues, publishing today in Scientific Reports, describe Wade and Matilda from Queensland's Winton Formation. The fossiliferous deposits have offered up a number of other dinosaurs, insects, fish and other critters from the heart of the Cretaceous, about 95 to 98 million years ago. Wade — the team's nickname for the specimen they describe as a new species, Savannasaurus elliottorum — is one of the most complete Australian examples of sauropod ever found. And within the long-necked, long-tailed herbivorous sauropod family, Wade falls into the titanosaur category. These were the biggest of the big.

Paleontologist Stephen Poropat strikes a pose with five vertebrae from Wade, the Savannasaurus elliottorum his team unearthed in northeastern Australia. Credit: Judy Elliott/Australian Age of Dinosaurs Museum of Natural History. Wade's formal species name, elliottorum, is in honor of David Elliott, the rancher and paleontology superfan who found the first fragments of skeleton while out mustering sheep back in 2005. Yes, it took more than a decade to dig out Wade (nicknamed for the late paleontologist Mary Wade) and prepare the fossilized bones, including the painstaking process of removing the hard rock encasing them.

Dem Bones, Dem Bones, Dem Savannasaurus elliottorum bones make up one of the most complete sauropod skeletons ever unearthed in Australia. Credit: Travis Tischler/Australian Age of Dinosaurs Museum of Natural History. Wade is not the biggest of the big in the titanosaur department (some titans checked in with lengths of more than 100 feet), but the Down Under dinosaur was just under 50 feet long, a respectable length for what is essentially a Cretaceous cow. Among the new titan's notable characteristics: a wide ribcage and hips. The hips were at least a meter wide, which must have made shopping for jeans a nightmare. Hefty hips are also seen in Diamantinasaurus, found in the same environment as Savannasaurus and another Aussie sauropod, the previously-describedWintonotitan.

Waltzing along with Wade into the scientific literature comes Matilda, the team's other find. Matilda was a little bigger than Wade, probably 50-60 feet tip to tip, and her species isn't new: the first partial Diamantinasaurus matildae turned up in 2009 in the same Winton Formation. What makes this Matilda such a find is that, while she doesn't have much of a body, she does have some brains. Or rather, a nearly complete braincase, the first bits of sauropod skull ever found in Australia. Having the skull helps researchers determine which species are ancestral or closely related. Once the family tree is known, they can work their way through the fossil record geographically to figure out how sauropods dispersed across continents.

The new specimen of Diamantinasaurus matildae, nicknamed Matilda, includes the first partial sauropod skull ever found in Australia. Credit: Travis Tischler/Australian Age of Dinosaurs Museum of Natural History. Another reason having the skull is huge: scans of the braincase may help researchers learn details about the dinosaur's hearing, sight and other senses.

March of the Titanosaurs

Wade and Matilda offer researchers some additional insight into how and when these giants made it to Australia. It's a puzzle paleontologists have been trying to piece together for decades. The fossil record hasn't been much help. Only South America, particularly the southern region of Patagonia, has a decent assemblage of sauropod fossils spanning just about the entire Cretaceous. On other continents, sauropod (including titanosaur) finds have been hit-or-miss. This suggests to paleontologists that the distribution of sauropods changed as the supercontinent of Gondwana broke up and today's comparatively puny Southern Hemisphere continents went their own way. Finding Wade and Matilda has helped researchers plot sauropod diversity in Australia and determine their most likely ancestors. According to the team's conclusions, it appears most likely that South American sauropods took advantage of a period of warming around 100 million years ago that would have made Antarctica a comfortable continent to cross without a parka.

A titanosaur walkabout as it might have played out in Cretaceous Earth, circa 100-105 million years ago. Though dispersed throughout much of the world by this period, it's possible the giant dinosaurs (and other sauropods) only reached Australia, home of the Winton Formation, by moving south through South America and then taking advantage of a period of warming that allowed them to cross the high latitude environment of Antarctica. Note: Dinosaurs not to scale. Titanosaurs were big, but not that big. Credit: Poropat et al, Scientific Reports, doi: 10.1038/srep34467, based on map from the Global Paleogeography and Tectonics in Deep Time series by Ron Blakey, copyright Colorado Plateau Geosystems Inc. The researchers behind Wade and Matilda readily agree that the route and timing of sauropod migration to Australia is not yet carved in stone...it's more pencilled in, and we'll need a lot more fossils from a lot more of the Southern Hemisphere to know for sure. If you want to know more about the messy Cretaceous conundrum the current fossil record presents, definitely give today's paper a read. It's open-access (yay!) and the introduction neatly sums up the challenges paleontologists face figuring out dino diversity and dispersal during the golden age of these "thunder lizards."