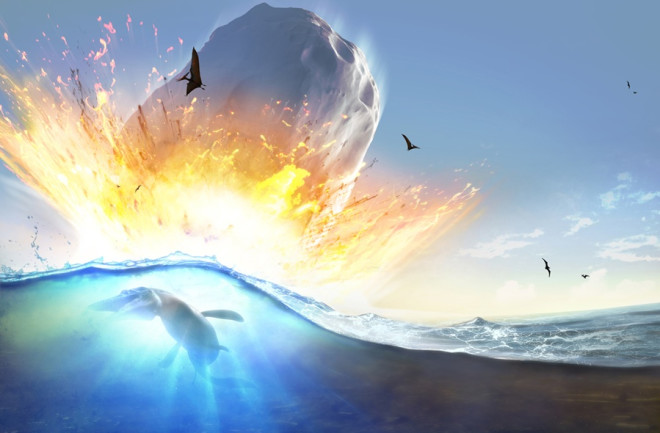 A 9-mile-wide asteroid smashed into a shallow sea off Mexico’s Yucatan Peninsula 66 million years ago. Some 75 percent of life on Earth died in the aftermath (Credit: Mark Garlick) Some 66 million years ago, a city-sized asteroid set fire to the planet and began what was likely the worst day in history. Decades of research have helped illuminate the actual impact. But scientists are still figuring out what happened over the years that followed. Based on studies of the impact site, it’s likely that sulfur vaporized from the crater would have choked our atmosphere and blocked the sun for years or decades. So Earth likely cooled into a kind of nuclear winter, with land temps plummeting as much as 28 degrees Celsius (50 degrees Fahrenheit). And after that debris settled, the lingering carbon dioxide probably pushed our planet into an epic period of global warming. But most of the specifics — like just how hot is hellish? — have come from models rather than the rock record. Now, a study published Friday in the journal Science attempts to change that. By examining many millennia worth of tiny fossils, the researchers estimate that Earth’s global average temps rose by a whopping 5 degrees Celsius (9 degrees Fahrenheit) after the impact and stayed at that level for some 100,000 years. That’s roughly in line with what some models had previously projected. Nonetheless, it’s still a dramatic change. For comparison, climate change researchers are currently investigating the impact of a 1.5 degree Celsius increase over the next century. So the study not only illuminates what killed off the world of the dinosaurs, it can also offer hints about what could happen as human-caused greenhouse gasses drive up temperatures in the centuries to come.

University of Missouri geologist Ken MacLeod has spent years trying to better understand this ancient period of Earth’s history. He’s traveled the world studying sites where a thin layer of sediment separates the final dinosaur days from the first years of the era that followed. This rock layer, called the Cretaceous-Paleogene boundary, or K/Pg, is easy to identify because it’s rich in iridium — an element common in asteroids but rare on Earth. For this most recent study, MacLeod's team excavated a site just outside El Kef, Tunisia, that boasts one of the most important sections of this K/Pg boundary. On a nondescript hillside, they dug a small trench and kept the relevant dirt so they could search it for sand-grain sized fossils laid down before and after the impact. It was a time when this region was underwater. Once the team had their samples back at the University of Missouri, they washed the slurry though a sieve. Then, using a binocular microscope, they picked out tiny fish bits — teeth, scales, bone. These microfossils were deposited during the last 50,000 years of the Cretaceous, the age of the dinosaurs, and the first several hundred thousand years that followed the impact. "While rare, there was enough fish debris in virtually all samples to make measurements," MacLeod says. And by dividing those fishy bits into three bins — one before, one just after and another immediately after that — they were able to spot distinct changes. Signatures of isotopic oxygen inside the fish fossils act like a thermometer, storing a record of the time that creature lived. And changes in those signatures imply that the global temperature climbed by 5 degrees Celsius after the impact and didn’t cool to prior levels for some 100,000 years. The authors do admit it’s possible that changing local conditions could have caused the temperature variations if, say, ocean circulation or some other factor changed nearby for a time. However they also say that other finds within their fossils would seem to rule out such a temporary local change. Overall, the level of global warming they described matches what some other scientists have suggested based on studying fossilized leaves. But, if they’re right, it would mean that global carbon dioxide levels rose to a truly insane 2,300 parts per million (ppm). That’s significantly higher than some other estimates. For comparison, thanks to human emissions, global CO2 levels have now climbed above 410ppm for the first time in millions of years. So, if CO2 levels were truly that high after the impact, it might suggest even more widespread wildfires than expected or some other carbon sources not previously predicted that would have contributed to emissions. Either way, the new study provides one more data point in the effort to understand some of the worst times on planet Earth.