If you wanted to turn a rat into a fearless critter, unfazed by cats or bigger rats, the best way would be to neutralise a small pair of tiny structures in its brain called the dorsal premammillary nuclei, orPMD. According to new research by Simone Motta at the University of Sao Paolo, these small regions, nestled within a rat's hypothalamus, control its defensive instincts to both predators and other rats. 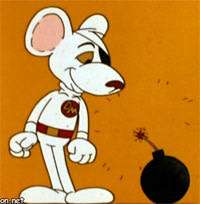 But not all neurons in the PMD are equal. It turns out that the structures are partitioned so that different bits respond to different threats. The front and side parts (the ventrolateral area) are concerned with threats from dominant and aggressive members of the same species. On the other hand, the rear and middle parts (the dorsomedial area) process the threats of cats and other predators. And both areas are distinct from other networks that deal with the fear of painful experiences, such as electric shocks.

This complexity is surprising. Until now, scientists have mostly studied the brain's fear system by focusing on an area called the amydgala, which plays a role in processing memories of emotional reactions. And they have generally assumed that fearful responses are driven by the same networks of neurons, regardless of the threat's nature.

There's good reason to think that. Hesitating in the face of danger is a sure-fire way to lose one's life, so animals respond in a limited number of instinctive ways when danger threatens. They freeze to avoid detection, flee to outrun the threat, or fight to confront it. These automatic "freeze, fight or flight" responses are used regardless of the nature of the threat. Rats, for example, behave in much the same way when they are menaced by cats or electrified floors alike, and actually find it very difficult to do anything else.

This limited repertoire of action convinced scientists that animals process different fears in the same way, relying on the same network of neurons to save their hides from any and all threats. Motta's research shows that this idea is wrong, certainly for rats and probably for other mammals too. The brain's fear system isn't a one-size-fits-all toolkit; it has different compartments that respond specifically to different classes of threats.

Motta discovered the boundaries of these compartments by exposing rats to either cats or belligerent rats and looking at the levels of a protein called Fos in their hypothalamus. Nerve cells produce Fos when they fire, so the amount of this protein is an indicator of neural activity.

When the rats were confronted with a cat for five minutes (the tabby was carefully held by the examiner), they ran down a tiny passageway in their cage and froze there for most of the time. When they were faced with another aggressive rat, they spent a similar amount of time staying their distance and frozen in fear, only fighting back briefly after they were first bitten by the intruder.

Both experiences dramatically increased the levels of Fos in their hypothalamus, and while the patterns overlapped slightly, they were mostly very different. One area in particular - the PMD - was activated in both groups of rats, but even here, the distribution of Fos was different. The cat boosted levels of this protein in the ventrolateral areas where neurons are smaller and tightly packed, while the violent rat provoked a burst of Fos production in the dorsomedial area and its larger, sparser neurons. 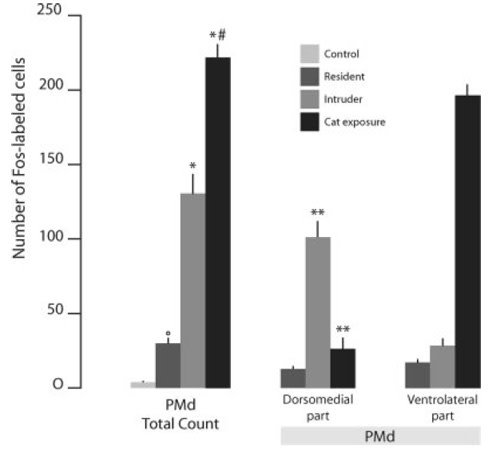 The importance of the PMD became incredibly clear when Motta disabled it by injecting a chemical called NMDA. In earlier work, the group found that these injections rob rats of their instinctive fear of cats. Knock out this tiny part of the brain and the rodents will happily approach a predator they would otherwise have fled from in terror.

Motta found that the injected rats also lose their fear of dominant individuals. They would still fight back if bitten, but unlike normal rats, they failed to escape or freeze - quite the opposite. They actually pestered the intruder for the entire five minutes of the test. If they were injected in areas outside the PMD or with simple saline, they retained their instinctive discretion.

This classification of threats carries on to other parts of the brain that are influenced by the PMD. Many of its neurons connect to the periaqueductal gray (PAG), an area that is also involved in fearful behaviour and that essentially processes the orders issued by the PMD. Here too, the cat and hostile rat led to different patterns of Fos production.

Even though rats behaved in the same way when threatened by these very different dangers, their brains processed the fear through two distinct circuits. And there is a third separate network that deals with the dread elicited by other forms of painful experiences like electric shocks. A large number of fear experiments have conditioned rats using electric shocks, and the fear they learn from these electrifying experiences depends on the amygdala.

But this system doesn't apply to the instinctive fearful responses that rats show to more natural threats. Neutralising the amygdala doesn't really affect a rat's fear of cats. Nor does infection with the brain parasite Toxoplasma gondii, which makes rats suicidally bold in front of cats, stop it from learning to fear an electrified floor. Fear may look the same on the outside, but it's becoming clear that in the brain, not all threats are treated equally.

MindRevenge Bedtime Procrastination Is a Thing. Why Are We Doing it?
Recommendations From Our Store