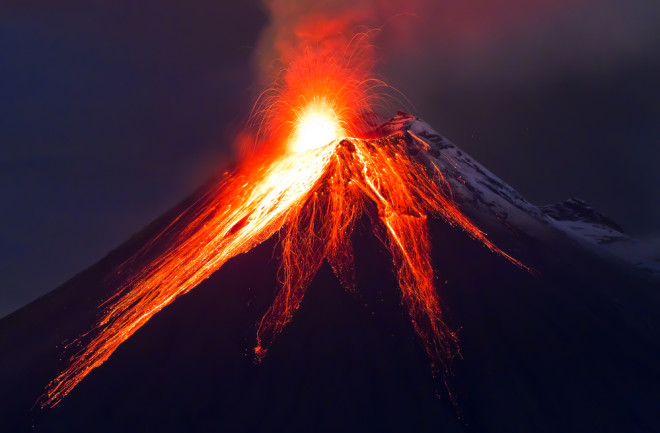 (Credit: Shutterstock) Earth’s worst day happened 66.043 million years ago — give or take 32,000 years. Let’s say it was a Monday. And if it was, then around Friday afternoon a strange new star would’ve begun growing brighter and brighter in the sky. Tragically, it wasn’t a cool new star at all. It was a Mount Everest-sized space rock traveling 45,000 mph. Surprise! The asteroid was so gargantuan, that as its leading edge plunged into the Gulf of Mexico, you would have seen the other side was still higher than a cruising 747 jetliner. Of course, if you saw the fireball, you wouldn’t be around long enough to worry about the aftermath. But things were pretty terrible for anything that survived. Earth’s vegetation burned that day. Then the sulfur and soot blocked out the sun, eventually killing everything larger than 55 pounds in a sort of nuclear winter. And if a radical new idea published inScience Advances this week proves true, the dinosaur apocalypse aftermath was a fiery hell. Two researchers are suggesting that the impact spawned an unimaginably large earthquake, which in turn triggered volcanic eruptions along tens of thousands of miles of Earth’s mid-oceanic ridges. These undersea mountains are formed by plate tectonics, and they wrap around the planet like seams on a baseball. If all these volcanoes went off at once, they would pump vast quantities of gasses into the ocean, worsening the die-off. The geologists behind the theory are Joseph Byrnes of the University of Minnesota and Leif Karlstrom of the University of Oregon. They looked at satellite measurements of mass along the mid-ocean ridge in the Pacific and Indian Oceans. Then they used underwater magnetic measurements pinpoint when the ridges formed. The results suggest large-scale seafloor eruptions happened within one million years of the asteroid impact.

Most impact scientists agree that the asteroid killed 75 percent of life on Earth when it hit Chicxulub, Mexico. But there’s still some debate why an enormous volcanic region called the Deccan Traps were erupting in India at around the same time. These volcanic events, called large igneous provinces, get the blame for a handful of other mass extinctions. Certain scientists have long proposed the impact caused those eruptions. Drill cores collected from the crater show the collision punched a hole something like 20 miles deep. The impact blasted fault lines all the way to Earth’s mantle. And models suggest that impact spawned twelfth-magnitude earthquakes. By comparison, the most powerful tremor on record was a magnitude 9.4 that struck Chile in 1960, launching a tsunami across the Pacific Ocean and ultimately killing thousands. Because the Richter scale is logarithmic, the difference between magnitudes 10 and 12 is huge. The USGS’ online calculator literally won’t compute that high — scientists generally assume it’s impossible to have earthquakes larger than magnitude 10. This new study puts forth one way it could have happened 66 million years ago. The twelfth magnitude earthquake would have sent seismic waves through the planet. Those seismic waves would have pushed magma out from Earth’s mantle and into the crust. “They’re flushing out melt that’s already sitting there and allowing it to erupt,” says Karlstorm. A similar phenomenon happened on a vastly smaller scale following the 2014 Napa earthquake in California. Farmers noticed streams that had previously run dry started flowing again.

The pair says their work actually grew out of another controversial study back in 2015 from University of California, Berkeley planetary scientist Mark Richards, who proposed that the asteroid reignited the Deccan Trap’s massive lava flows. Richards suggested the impact could have caused a 9.0 magnitude earthquake — everywhere on Earth. “I thought this is really weird,” says Byrnes. “I don’t see how you trigger Deccan without triggering everything else.” And if the impact had triggered large-scale earthquakes around the planet, surely scientists would have known about it. Eventually, Byrnes and Karlstrom talked about this idea and realized they could use marine gravity anomalies — the seafloor satellite data — to check for signs of ancient eruptions. Their results aren’t convincing everyone, however. Jay Melosh is an expert in asteroid impacts, and he’s also the one who modeled the intensity of earthquakes caused by Chicxulub. He’s not convinced by the correlation. “I’m skeptical,” Melosh told Discover in an interview this week. He says the researchers haven’t dated the seafloor eruptions accurately enough to say with certainty that they happened simultaneously. The Indian tectonic plate was also already moving at the time for unrelated reasons. He also points out that there’s no evidence of increased eruptions near the impact site. “These correlations are interesting,” he added. “This is the kind of speculative publication that advances science, but I wouldn’t say we have a definitive result yet.”