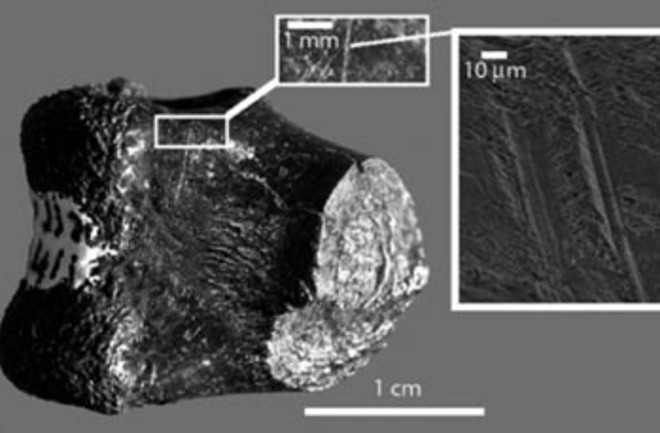 Your brain is hungry. That big gray calculating machine in your head is an energy hog that needs lots of calories—more than the diet of fruits and plants that our distant hominin ancestors probably ate could provide. It's a mystery, then, just how human ancestors like Homo erectus—who were around when our craniums started to expand in a hurry—ate enough to start growing big brains. But buried in Kenya, a two-million-year-old hint has emerged: Those hominins started eating seafood way back then, archaeologists say. Near a place called Lake Turkana, archaeologists David Braun found two intriguing groups of items: The bones of fish, turtles, and even crocodiles with the scars of stone tools still showing, and stone fragments that Braun says come from the simple tools these hominins used to carve up the marine animals. He and his colleagues report the find of our ancestors' ancient feast in the Proceedings of the National Academy of Sciences.

Today, their leftovers—in the form of hundreds of bones and several thousand stone tools—are the earliest “definitive evidence” of hominins butchering and eating aquatic animals, which are rich in fatty acids essential for growing bigger brains [ScienceNOW].

If the hominins of this time dined on the bounty of the sea, Braun says, they could have ingested the calories and fatty acids needed for accelerated brain growth without resorting to scavenging for animal remains, which would have brought our small ancestors in competition with large and fierce predators.

Braun thinks river and lake floodplains of the sort that preserved his fossils gave early hominids a low-risk hunting opportunity. “As lakes and rivers flooded and receded, animals could have been caught. The remains could be easily collected,” he said. Humanity’s ancestors “could have entered the higher trophic level without taking on the risks” [Wired.com].

If Braun is correct, then this was a stroke of good fortune in humanity's history. The hominins who would have lived at that time and place didn't have the cognitive wherewithal to get organized and hunt, but since floodwaters left fish at their feet, they didn't need to. And the Kenya site itself is remarkable in archaeological terms. From thousands of bones, the team was able to reconstruct at least 10 individual animals that the early humans killed and carved up at the site. Says Braun:

"At sites of this age we often consider ourselves lucky if we find any bone associated with stone tools, but here we found everything from small bird bones to hippopotamus leg bones" [Times of India].

DISCOVER: What Does Science Say You Should Eat?

Gene Expression: Catching Fire: How Cooking Made Us Human