Did Allergies Evolve To Save Your Life? 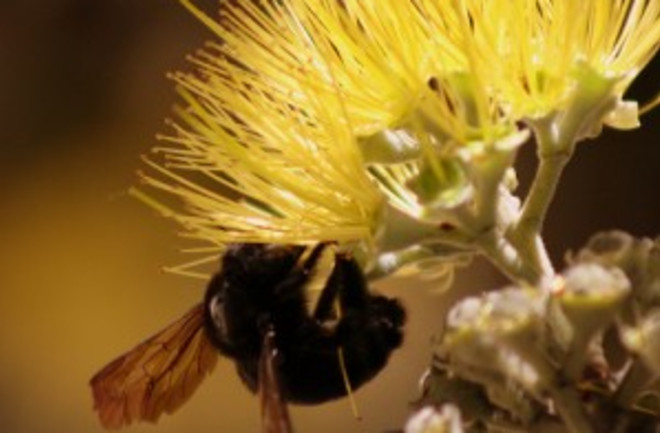 Introduced bee on a native ʻōhiʻa flower. Photo by Flickr user Zesuri As most of my friends on the mainland don longer sleeves and more layers, it's hard not to be a little smug about living in paradise. While, in their neighborhoods, leaves are falling off of trees and icy winds threaten to bring snow, I can throw on a T-shirt and shorts, grab a picnic basket, and hike to a scenic overlook for lunch. But Hawaii's ever-sunny weather comes with one side-effect that can be deadly serious: year-round, Hawaii has bees. Don't get me wrong—bees are wonderful insects, even though most species are not native here in Hawaii. When the first Hawaiians arrived on the shores of these stunning isles, only the yellow-faced bees buzzed around. Honey bees were introduced in the 1850s, and have since become indispensable, wedging their way into the Hawaiian economy and filling the shoes of native pollinators that have become scarce. They're economically and ecologically vital, not just here in Hawaii, but throughout the US—according to the U.S. Department of Agriculture, these busy bugs pollinate 80% of our flowering crops, and are thus essential for the production of 1/3 of our food. Worldwide, the economic contribution of pollination alone has been valued at over $200 billion. But for more than 2 million Americans, bees are a dangerous threat. Somewhere between 1% and 7% of human beings are allergic to insect venoms, with their symptoms ranging from mild overreactions to full-blown anaphylactic shock. For those with bee allergies, even the slightest sting can lead to a fight for life. Even more troubling is that, in half of all fatal sting allergy cases, victims had no previous major reactions to venom. Nearly 100 Americans die every year from bee stings, and many more experience severe reactions that require immediate medical treatment.

A Russell's viper, one of the most dangerous snakes in the world. From Wikipedia user Shyamal But for the hypothesis to hold up, IgE responses would have to be beneficial for much more than just bee stings. So, the team tried the same experiment with venom from Russell's vipers. Russell's vipers cause more snakebite incidents and deaths than any venomous snake in the world, and are one of the "big four" snakes of high concern in India. Again, pre-exposure to the venom protected the mice. "Our findings support the hypothesis that this kind of venom-specific, IgE-associated, adaptive immune response developed, at least in evolutionary terms, to protect the host against potentially toxic amounts of venom, such as would happen if the animal encountered a whole nest of bees, or in the event of a snakebite," affirmed co-author Stephen Galli. "This is the first evidence, that we know of, indicating that IgE-associated 'allergic-type' immune responses can actually reduce the toxicity of naturally occurring venoms." The connection between toxins and allergies may have gone unnoticed because, in modern times, the substances that cause allergies have become less threatening in our daily lives. "We experience allergies in a much cleaner world, where we don't have the same threats of venomous creatures and potentially toxic food that existed for much of our evolutionary history," said Galli. "So we're left with this residual type of reactivity that seems completely mysterious and pointless and harmful." If allergies are supposed to be helpful, though, why are some people so prone to anaphylaxis? "Anaphylaxis probably represents the extreme end of a spectrum of IgE-associated reactivity," said Galli, "which in some unfortunate individuals is either poorly regulated or excessively robust, so the reaction itself can become dangerous." Further research is needed to see if the pattern holds with the diversity of toxins that cause allergies. But if it does, it says something very interesting about our evolutionary past. For such a dangerous defense system to have evolved, the threat of deadly toxins—like those from venomous animals—must have created a strong selective pressure. Lynne Isbell once proposed that fear of venomous snakes drove the evolution of primate eyes and brains, tying the very elements that make us human to these infamous animals. If IgE antibodies, too, are a defense against venoms, it would further suggest a very intimate relationship between our ancestors and dangerous animals. Perhaps the biblical tale connecting early humans to snakes is much closer to reality than we thought. Citation: