Pseudoarchaeology, conspiracy theories that ancient civilizations were founded by aliens or the denizens of Atlantis, are more than just silly—they’re dangerous. 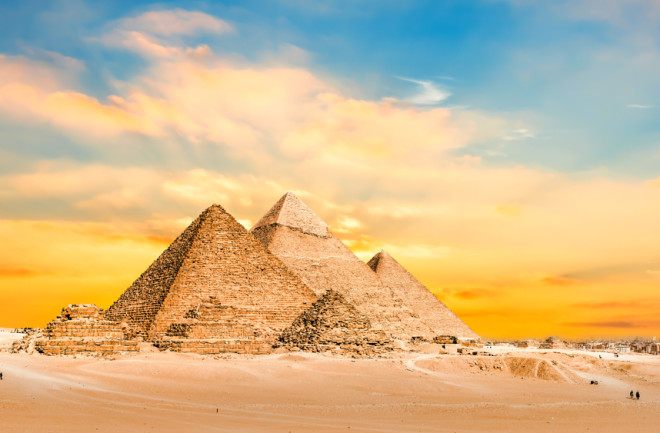 One afternoon in June, I found an email in my inbox from Atlantis Rising: The Research Group. The blog and YouTube channel claims to “challenge orthodox thinking” and archaeologically explore questions about human history that are “still largely neglected by academia.” Questions like: “Were aliens involved?”

It might be easy to simply dismiss organizations that push speculative conspiracy theories while presenting themselves as purveyors of supressed knowledge. But what caught my attention in this email was a section advertising a video interview with Frank Joseph.

Since 1987, Joseph has published several books, mainly focused on the mythical continent of Atlantis. From 1993 to 2007, Joseph was also the editor-in-chief of the pseudoarchaeological Ancient American magazine. Perhaps more importantly, Frank Joseph is the pen name for Frank Collin, who was the former coordinator for the American Nazi Party and founder of the National Socialist Party of America. This is who Atlantis Rising was recommending to their audience.

For a long time, pseudoarchaeology was pushed to the fringe by archaeologists as something not worth their attention. But the fringe is where ideas can fester and become dangerous.

The idea of a lost city or continent called Atlantis persists in the public imagination. (Credit: George Grie/Wikimedia Commons)

As an archaeologist currently working on my doctorate, I have spent the last year examining the ways various groups, such as white nationalists, use pseudoarchaeology in their worldviews. Understanding this feels particularly important today, considering the recent increase of such groups in the United States. According to a 2019 report from the Southern Poverty Law Center (SPLC), the number of white nationalist hate groups in the United States increased by 55 percent between 2017 and 2019.

Pseudoarchaeology comes in many shapes and forms but relies on the same core argument: People of the past did not have the knowledge, technology, and/or capability to achieve all that they are said to have accomplished, so someone or something else was involved. Ancient alien proponents will tell you Egypt’s great pyramids, for example, or Peru’s Nazca lines were really due to extraterrestrials, while hyperdiffiusionist proponents will tell you they were built by residents of Atlantis, or another “highly advanced civilization” that lived more than 13,000 years ago. Archaeologists are often accused of conspiring to hide the “truth” of these histories.

These pseudoarchaeological arguments may seem to be simply fun to entertain. But they are invariably heavily biased against Black people, Indigenous peoples, and other people of color (BIPOC), who are doubted to have been responsible for their own histories. Archaeological sites from Africa, Asia, and the Americas are often put forth as proof of external interventions, while the achievements of those who lived in ancient Greece or Italy, for example, are rarely questioned.

In other words, these arguments are often racist.

While arguments about extraterrestrial or Atlantean ancestors may seem outlandish, some people do believe in these arguments. Chapman University in California, which conducted the Survey of American Fears between 2016 and 2018, found in 2018 that 57 percent of their respondents believed that ancient advanced civilizations such as Atlantis existed (a 17 percent increase from 2016), and 41 percent believed that aliens visited the Earth in the ancient past (a 14 percent increase from 2016). These have become more than just beliefs: They’re realities for those who have embraced them.

Pseudoarchaeology is useful to white nationalism specifically because it casts doubt on the achievements of BIPOC communities, opening the doors to rewriting history through a white power lens. The SPLC has noticed this and written about connections between pseudoarchaeology and far-right ideologies such as antisemitism and white nationalism. White nationalism is a pro-white racial ideology that shares many interests with white supremacy, such as anti-immigration stances and beliefs that the interests of white people must be placed first.

White nationalists also encourage enhanced protections and rights to defend what they see as the “purity” of the white race, a pseudoscientific concept built on extremely reimagined views of history and genetic ancestry. A core belief of white nationalism is a conspiracy theory referred to as the “great replacement,” which suggests a “white genocide” is happening: that white people are nearing extinction and need to be protected.

Though anthropologists and geneticists have long noted that race is not a genetically defined concept but rather socially defined, white nationalists have sought to genetically define and support the concept of a “pure white race.” For example, at-home genetic ancestry tests have become popular with white nationalists, who reinterpret the results in a variety of ways to support their beliefs that a “pure white race” exists and that, without protection, this special race will be replaced.

Although ancient alien theories have been discussed on white nationalist websites such as Stormfront and the Renegade Tribune, it is hyperdiffusionist theories—the distribution of cultural traits or people spread across vast distances—about Atlantis, Aryans, and Solutreans that are especially popular with white nationalists in North America.

Hyperdiffusionist theories are the easiest to adapt to the conspiracy of replacement: ancient white Atlanteans, Aryans, or Solutreans traveled to North America first and were “replaced” by Indigenous peoples. For example, books and articles by Frank Joseph and Patrick Chouinard, a regular contributor to the Renegade Tribune, adhere to early 20th-century Nazi beliefs that white Aryans were descended from the people of Atlantis, who purportedly also spread to the Americas tens of thousands of years ago and brought technology and wisdom with them. Joseph and Chouinard argue that these white descendants in North America were replaced over time by Indigenous peoples.

The Solutrean culture lived in Europe some 20,000 years ago. There is no convincing evidence that they were the first settlers of North America. (Credit: Sémhur and MPants at work/Wikimedia Commons)

Similarly, writers on Stormfront argue in support of the Solutrean hypothesis, a hypothesis widely rejected by archaeologists that proposes people from the Solutrean culture of southwestern Europe were the first to settle on the east coast of North America between 17,000 and 20,000 years ago. On Stormfront, science suggesting the Solutrean people had darker skin is ignored, and instead people argue that white Solutreans in North America were abruptly and violently displaced by Indigenous peoples.

Archaeological evidence does not support these theories. While the full story of life during the Pleistocene in the Americas is still evolving, there is no evidence for a violent displacement of white Solutreans anywhere in North America, at any point in time. The continent was always the land of Indigenous peoples.

Pseudoarchaeology contributes to the marginalization of BIPOC communities by denying their histories and instead reattributing them to mythical continents or even extraterrestrials. White nationalists use this denialism to rewrite—or rather “re-white”—history to bolster their own systems of power.

The public and the discipline must challenge pseudoarchaeology and the violent, white power structures that often use it to support their own goals. It is through these challenges that all of us can support recentering the voices of marginalized groups in telling their own histories and ensure those are the histories being heard.

Stephanie Halmhofer is a doctoral student at the University of Alberta. This story was originally posted on SAPIENS. Read the original article here.