Devious Mating 101: The Lesson of the Fairy Wren and the Butcherbird 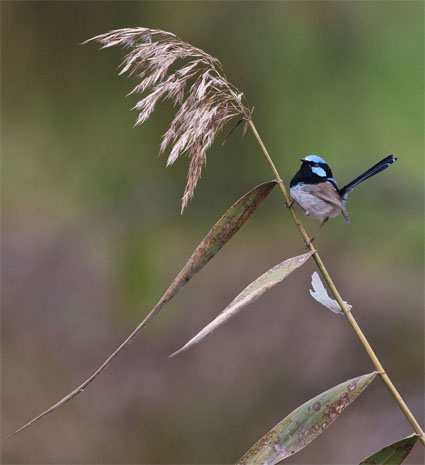 You'd think birds would hush up at the sound of a predator, especially if that predator's name is the "butcherbird." But that's not the style of the male splendid fairy-wren, and it turns out he has a good reason for raising a ruckus when the butcherbird calls: it helps him get a mate. Researchers studied this wren-butcherbird interaction in Southern Australia by playing iPod bird songs for wild wrens to hear. As the press release reports, the researchers determined the the males were engaging in a form of "vocal hitchhiking":

"We have shown that females do, in fact, become especially attentive after hearing butcherbird calls," said Emma Greig, PhD, first author of the study and currently a postdoctoral researcher at Cornell University. "So, it seems that male fairy-wrens may be singing when they know they will have an attentive audience, and, based on the response of females, this strategy may actually work!"

But how do you tell if a bird is paying attention? The scientists calculated attention by whether the female wren looked towards the call and responded with her own song. Female wrens responded overwhelmingly when the researchers played the male wren's distinctive "Type II" call immediately following the cry of a butcherbird. From the press release:

"The most exciting possibility is that Type II songs have a sexual function, and that females are more easily stimulated by, or receptive to, displays after being alerted by a predator, such that the male's song is especially attractive," Greig said.

Their study, published in the journal Behavioral Ecology, should spur research into other bird species--like the white-throated magpie jay and the fairy gerygone--whose males display a similar post-predator call. And birds may not be the only ones who use fear as an aphrodisiac--anyone headed to a horror movie for Friday date night? Related Content: 80beats: How Male Antelopes Lie to Get More Sex: With False Alarm Calls Not Exactly Rocket Science:The Bird That Cries Hawk: Fork-Tailed Drongos Rob Meerkats With False Alarms DISCOVER: The Best Ways To Sell Sex DISCOVER: The Mating Game’s Biggest Cheaters (photo gallery)