Despite Latrines and Aqueducts, Ancient Romans Were Full of Worms 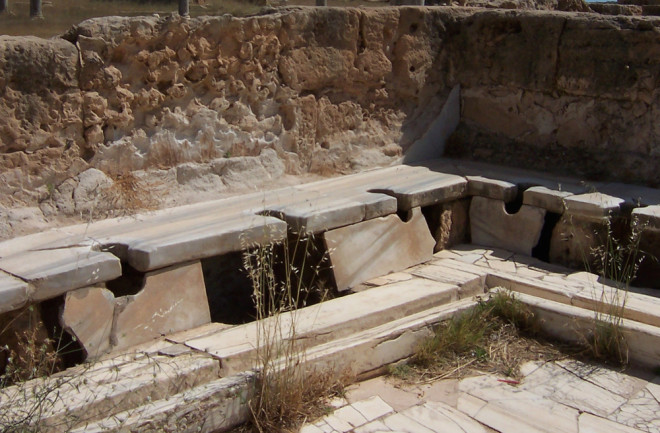 Roman latrines from Lepcis Magna in Libya. (Credit: Craig Taylor) Roman civilization wasn’t as clean and healthy as we’ve been led to believe. Despite communal latrines, public baths, water aqueducts and requirements that human waste be hauled out of cities in carts, the Roman Empire was rife with parasites. In a study published Thursday in the journal Parasitology, Piers Mitchell shows that far from cleaning up the Empire, the sanitation practices employed in ancient Rome did little to stem the spread of parasites and lice. Further, their taste for fermented fish sauce may actually have helped spread a particular tapeworm.

Mitchell, an affiliated lecturer in the University of Cambridge Division of Biological Anthropology, studies diseases in past civilizations, and is interested in “how human inventions and discoveries might alter the way in which we are affected by diseases.” Since the Romans were known for their sanitation technologies, he wrote in an emailed interview with Discover, “I thought their effect upon parasites would be a fascinating topic to study.” Mitchell cobbled together evidence of parasites from ancient latrines, human burials and fossilized feces to gauge Romans' health. He also looked for signs of trouble in combs and textiles from Roman Period excavations across the Roman Empire.

A human whipworm, T. trichiura, that was removed during a colonoscopy. (Credit: CDC) He thought Roman technology would reduce the kinds of parasites spread by poor sanitation, but that wasn’t the case. Despite the Roman Empire's attention to sanitation, the rates of intestinal parasites such as whipworm and roundworm did not decrease as one would expect. “There was no sign of a decrease in these parasite species,” he stated. “I also noted an increase in the geographic distribution of fish tapeworm under the Romans compared with the Bronze Age and Iron Age Europe.” And although they bathed regularly, lice and fleas were just as widespread among Romans as in Viking and medieval populations. Mitchell's investigation even revealed combs that looked like they were designed to remove lice from hair — it may have been a daily chore.

A Step Forward, A Step Backward

Mitchell believes the Romans introduced conflicting practices, with one negating any benefit the other could have provided. In particular, he stated, the possible benefits from latrines and sewers were offset by regulations to keep towns clean of refuse. “Under the Romans, populations had to remove waste from the streets and it was taken out of towns using carts,” Mitchell stated. “While this should have made towns cleaner, they used the waste to fertilize crops in the surrounding fields. Using human feces as manure increases crop yields, but will lead to reinfection by parasites in the populations eating those foods.”

A Roman whipworm egg from Turkey. (Credit: Piers Mitchell) That practice explained many of the intestinal parasite rates, he stated, but there was one creature that he believes was spread a different way. A fish tapeworm made its way across the Roman Empire, Mitchell believes, “quite likely by the trade in fish sauce,” called garum. The sauce was made of pieces of fish, herbs, salt and flavorings. It was not cooked, but fermented in the sun. “Garum was traded right across the empire, ensuring that people living in regions that were not endemic for fish tapeworm would still have been at risk of contracting the parasite,” Mitchell writes in the paper. Delicious.