Deer Have Antlers, Walruses Have Tusks – Here’s Why So Few Birds Have Weapons of their Own

There’s plenty of aggression in the bird world, but little armed violence. 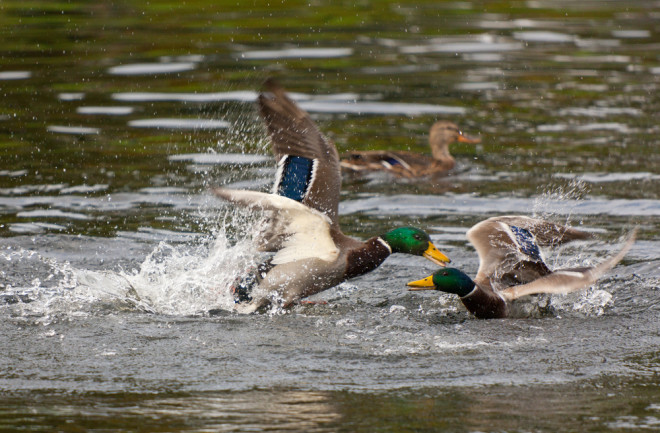 Mating season in the animal kingdom can be dramatic, and sometimes violent. As an example, take deer clashing their antlers during the rut – nostrils flaring, hooves hammering the ground, grass flying everywhere, and that eerie silence before the thunderous collision. The winning buck gets access to the harem, while the loser must find other females to fight for.

Many other animals also have formidable weapons. They range from rhinoceros beetles’ pointy horns to fiddler crabs’ proportionally gigantic claws and the long tusks of walruses and narwhals.

Birds also need to compete for their mates, which often involves fiercely defending a territory. But most birds don’t sport impressive weapons; we know them better for their colors, dances and songs. As evolutionary biologists primarily interested in birds and weapons, respectively, we couldn’t help but wonder: Why do most birds lack their own version of antlers? The answer, which we present in a recent study, likely lies in a trade-off between flying and fighting.

It’s all about weight

For anything that flies, whether it’s a bird or an airplane (or even Superman), flight demands more energy – in the form of burned fat or fuel – than moving on the ground or in the water. And the amount of energy required increases with weight.

How stark is this trade-off? Several years ago, United Airlines started printing its inflight magazine on lighter paper to reduce the weight of a typical flight by about 11 pounds, or 0.01% of an airplane’s empty weight. Through this tiny decrease, the company cut its annual fuel use by 170,000 gallons, saving US$290,000 yearly.

If you fly a lot, like an airline that operates 4,500 daily flights or a swift that flies 10 months out of every year, every reduced ounce counts. And consequences are harsher for the swift. Animals can’t buy energy in the form of fuel – they have to find food and consume it, which itself requires energy.

On the other hand, if you are a rooster that only barely flies, you might be able to afford a bit of extra weight in the form of a weapon. In other words, given the cost of flying, it makes sense that birds should be able to afford weapons only if they don’t depend too much on flight. This trade-off is supported by mathematical flight models and measurements of the cost of flight in real birds, which show that carrying avian weapons such as leg or wing spurs in flight costs more “fuel” the more a bird flies and the lighter the rest of its body is.

To be sure, some birds do have weapons specialized for fighting – just not very many species. And the weapons that birds do carry aren’t as big, heavy or flashy as in other animals. Rooster spurs, a classic example, are about as antlerlike as bird weapons get.

About 170 species – less than 2% of all existing avian species – possess spurs on their legs or wings. Spurred legs are only found on landfowl – birds that mostly feed on the ground – including turkeys, pheasants, peacocks and many of their relatives.

Wing spurs are less common and more dispersed across bird species. Examples include lapwings, jacanas, sheathbills and some ducks, geese and doves. Wing spurs are typically located on the bird’s wrists and vary in form from blunt knobs to sharp spikes.

For the purpose of testing the fight-or-flight idea, it’s good news that some species carry weapons. This allows us to analyze our expectation that spurs should be found more often in species that depend less on flight than on those that fly frequently.

Luckily, we were able to draw on a global data set of the hand-wing index – a metric of wing shape that scientists use to quantify how well various bird species are adapted for flight and hence, presumably, how much they depend on it. This information was recently made available for every living bird species.

Our findings showed clear connections across bird species between the presence of spurs and flight behavior. On average, species that depend more on flight have fewer or no spurs. Among species that do have spurs, longer spurs tend to appear in larger-sized species.

Using evolutionary models, we also looked back at the historical process that led to this current fight-or-flight situation. We found that species that depended more on flight were more likely to lose spurs over time than species that flew only occasionally. In other words, the absence of spurs on most birds today is likely the result of species that were frequent flyers losing spurs, not occasional flyers gaining them.

To fight or not to fight

Our findings show that flight is a very good explanation for why birds don’t impress much in the weaponry department. But that doesn’t necessarily translate to peace and love. For example, hawks use their talons as weapons in violent fights, and toucans do the same with their bills.

We shouldn’t expect these cases to be the rule, though. That’s because claws and bills are essential for other tasks like foraging, feeding, thermoregulating, preening and anchoring. In contrast, spurs’ and antlers’ only function is to fight. Using claws and bills in combat can mean compromising other essential functions. For example, in 2017, Chinese engineers designed a titanium alloy bill for a captive crane that broke its bill during a fight and consequently lost the ability to feed without human help.

If most birds can neither bear spurs because they compromise flight nor risk features such as their bills because they are essential for other tasks, the solution may be to avoid physical combat as much as possible. Indeed, many birds defend territories primarily by singing or showing off ornaments. Flight preventing the evolution of weapons may thus help explain the striking colors, dances and songs that we find across birds.

The next time you’re outdoors and hear two birds screaming their lungs out at each other instead of fighting, remember that peace might be the only option evolution gave them.

Alexandre V. Palaoro is a Post-doctoral Fellow in Materials Sciences & Engineering, Clemson University. João C. T. Menezes is a Ph.D. Student in Organismic and Evolutionary Biology, UMass Amherst. This article is republished from The Conversation under a Creative Commons license. Read the original article.