Darwin Was Right About Bird Vomit 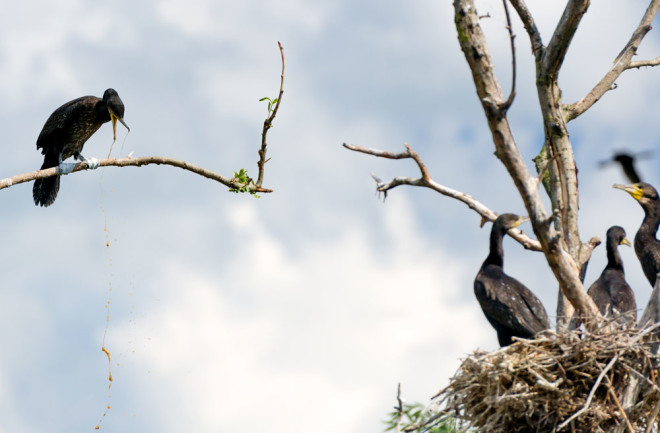 (Credit: Shutterstock) Charles Darwin was a busy man. When he wasn’t advancing his groundbreaking theory of evolution by natural selection, he could be found carefully analyzing the contents of bird vomit and droppings. No, this wasn't an obscure hobby. He was getting his hands dirty to stack up more evidence to support one of his many hypotheses. He suspected that some birds had an unusual way of transporting plants to new locations. “Freshwater fish, I find, eat seeds of many land and water plants; fish are frequently devoured by birds, and thus the seeds might be transported from place to place,” he wrote in Origin of Species. In the same passage, Darwin described a set of experiments in which he stuffed seeds into the stomachs of dead fish, and then fed those fish to birds. After several hours, the birds would either excrete or regurgitate the seeds and “several of these seeds retained the power of germination,” he wrote. But until now, those experiments had not been shored up with research in the wild. Last month, a paper published in Biology Letters finally validated Darwin’s notion that fish-eating bird puke could help spread organisms like plants over great distances.

After a long day of fishing, cormorants gather together to roost under the moonlight and vomit up pale brown, marble-sized pellets that look like mini, mucous-covered meatballs. If you slice one open, you will find the hard-to-digest portion of the cormorant’s recent feast. The pellets are mainly composed of bits of fish, but as Darwin noted, they also sometimes contain the plant seeds and invertebrates that those fish were chowing down on before they were taken prey. A great cormorant will travel far from its daytime fishing site to its nighttime roost—up to 30 miles on a regular day, and even further during migration, says the study’s lead author Casper van Leeuwen from the Netherlands Institute of Ecology. “That means the plant seeds or aquatic invertebrates could be transported over quite some distance inside of a bird that has indirectly ingested them.”

This method of transport is known as secondary dispersal, as it relies on two separate animals, or vectors, to haul the plant seed or invertebrate egg to a new location. Primary dispersal, on the other hand, involves just a single vector and is far more common. The success of secondary dispersal hinges on the ability of the seed or egg to survive the treacherous passage through not one, but two guts—the fish’s and the bird’s. To find out if Darwin was right about secondary dispersal, van Leeuwen and his colleagues nabbed cormorant pellets from below roosting trees in Denmark, Sweden, and The Netherlands and examined them under the microscope. Embedded in nearly half of the 112 pellets they collected were seeds or eggs from a host of different species. The researchers were even able to coax three of those seeds to germinate and one egg to hatch. Although it was a small number, it confirmed that some life forms can in fact survive a double-gut passage, and still flourish. These impressive survival skills stem from a set of handy adaptions, van Leeuwen says; he notes that the hard seeds of some fruits don a protective coating that water cannot breach, while water fleas can survive half a year of drought by entering into a hibernation-like resting stage. Life in the wetlands is marked by poor water quality and fluctuating temperatures, he says, and such harsh conditions may have inadvertently equipped these organisms to survive in another extreme environment: the gut of a fish or bird. That’s good news for plants in need of a quick escape from the hardships posed by rapidly changing climates. Secondary dispersal can potentially carry plant seeds farther than other modes of transport like wind or water. What’s more, cormorants almost always deposit seeds in habitats where they are likely to thrive, like the shores of lakes, whereas blowing winds will sometimes drop them onto highways or rooftops. At the same time, secondary dispersal could be bad news for the environment because it may boost the spread of invasive plants. The consequences are still under investigation. But with regard to Charles Darwin and his idea about secondary dispersal of plants by fish-eating birds, these latest findings are a definite win. “We got the field evidence that his hypothesis was right,” says van Leeuwen.