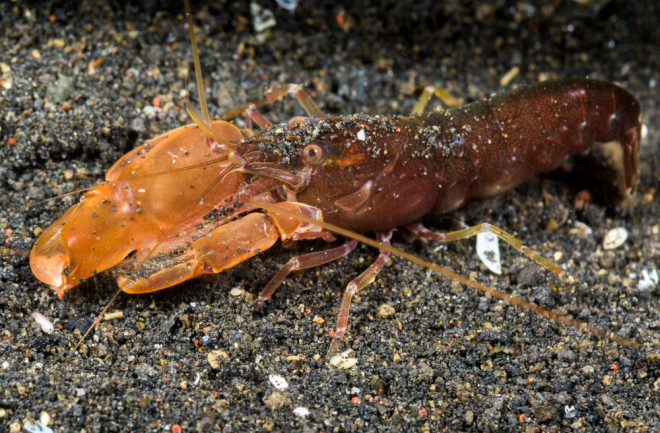 Stick your head underwater near a reef and you may hear the sound of bacon frying. The tempting sound comes from the near-comically oversized claws of snapping shrimp — they slam shut fast enough to create bubbles of air that disappear with a loud pop. The crackling of countless shrimp clacking together is mixed with fish grunts, whale and dolphin calls and other sounds underwater to create what’s called the oceanic soundscape. It’s the kind of biological white noise you might fall asleep to at night.

But one group of researchers think they have another use for the ocean’s background noise. Scientists funded by the military’s research arm, DARPA, the Defense Advanced Research Projects Agency, think tuning in to the chorus of the sea might allow them to detect the near-silent passage of underwater drones. In recent years, the U.S., China and Russia have all been developing fleets of drone submarines — including some that can carry nuclear weapons. At the same time, Russian submarines have been increasingly active in the Atlantic Ocean. Last year, Russia claimed to have sailed submarines just off the U.S. East Coast without being detected.

In partnership with researchers and defense companies, the U.S. government is exploring how to leverage the sounds that permeate the ocean. The Persistent Aquatic Living Sensors (PALS) program includes a number of proposals for how monitoring the behavior of specific species might offer clues to the presence of non-living objects like unmanned drones. Schools of fish might act different around underwater drones, for example, altering their movements or calls in a recognizable way. Bioluminescent organisms might similarly signal with patterns of light, and microbes could even be used to detect the magnetic signature of a motor.

Snapping shrimp, too, could play a role, though their part would be a bit more passive. Alison Laferriere, a scientist with the defense company Raytheon BBN Technologies, is leading a team of researchers examining the possibility of using the shrimp as a kind of natural sonar.

“The idea is that the sounds that the shrimp create would travel to the object, reflect off of it and we would be able to detect it at our sensors,” she says. The sound the shrimp make is incredibly loud, around 190 decibels at close range. The advantage over traditional sonar is that the shrimp are everywhere on most reefs, and there’s no need to power a device to create the sound waves. A system of hydrophones strategically placed on reefs would be able to simply pick up sounds for analysis.

Listening to the Sea

Other teams are looking at ways to simply monitor what Laferriere calls the ocean’s “biological soundscape.”

“What we call the biological soundscape is the collection of all the sound that all of the animals are making underwater,” she says. “What we’re interested in, specifically, is monitoring the soundscape and determining if theres a change in the soundscape in some way when an underwater vehicle passes through.”

Animals are often exquisitely attuned to their native environments, and their behaviors will change in response to outside intrusions. Schools of fish, for example, will swim in a recognizable pattern when under attack, while other fish are in near-constant acoustic communication with each other. Learning to read the patterns of movement or sound could provide a valuable tip-off that a man-made intruder is in the water.

Laferriere is just beginning tests with snapping shrimp in the lab, and says that a trip is planned to the U.S. Virgin Islands later this year to begin sampling the underwater soundscape. If all goes well, further tests in the ocean lie ahead. She and her team hope to get a better idea of what the ocean sounds like so that they can begin teasing out the kinds of patterns that the presence of an underwater drone might create.

For the rest of us, it’s reminder that when we go in the ocean we, might not know it, but the multitude of creatures there are watching.

[Update 3/25/19: The article has been updated to correct the spelling of Alison Laferriere’s last name.]