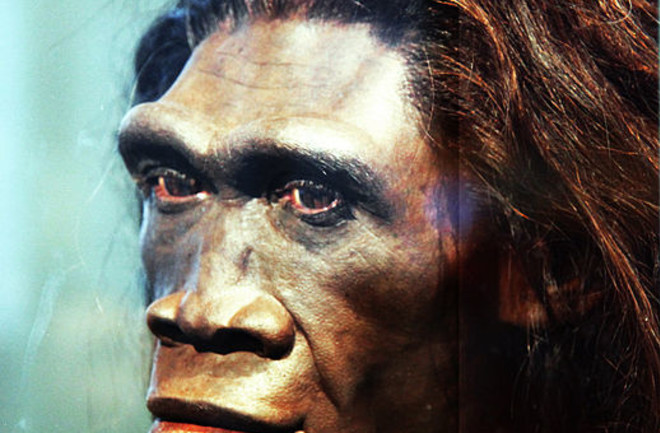 A reconstruction of a female Homo erectus. Reconstruction by John Gurche; photographed by Tim Evanson A long-discounted theory about the evolution of skin color may have had it right all along, new research suggests. Darker skin gives individuals much greater protection from UV light-induced skin cancer. Pale-skinned people are roughly 1,000 times more likely than individuals with dark skin to suffer from the three most common skin cancers. But for years, researchers believed the lowered risk was an incidental benefit, not one derived through the pressure of natural selection. Even Charles Darwin poo-poohed the notion that pigmentation could be an adaptive trait. A new study, however, finds evidence that skin cancer was in fact a driving evolutionary force for early hominids to have darker skin.

The findings were based studying people with albinism in equatorial Africa, which has the highest UV radiation exposure on the planet. The study, based on medical records, found that more than 80 percent of people with albinism in this region developed terminal skin cancer before the age of 30, or roughly at one's reproductive height. Thus, researchers say, individuals with light skin were likely to die sooner— and produce fewer offspring — than those with darker skin. Researchers involved in the study believe that the earliest humans had pale skin containing pheomelanin, as do our close relatives, the chimpanzees. As our ancestors lost their body hair, likely to withstand the hot temperatures in the African savannah, that pale skin would have put them at great risk for early-onset skin cancers.

But those individuals who evolved to produce eumelanin — brown-black pigmentation — would have had a definite advantage because eumelanin affords natural protection from DNA damage — and skin cancer — caused by UV radiation. Darker-skinned early humans would have been less likely to die from skin cancer at a young age, and therefore more likely to live to produce more offspring, who would inherit their adaptive dark skin. The study, published in Proceedings of the Royal Society B, suggests that dark skin arose between 1.2 and 1.8 million years ago in equatorial Africa — the same area where albinism so often leads to an early death from skin cancer today.