Dancing With Dragonflies, For Science

Two scientists realize that before you can find out how dragonflies migrate, you have to catch them. 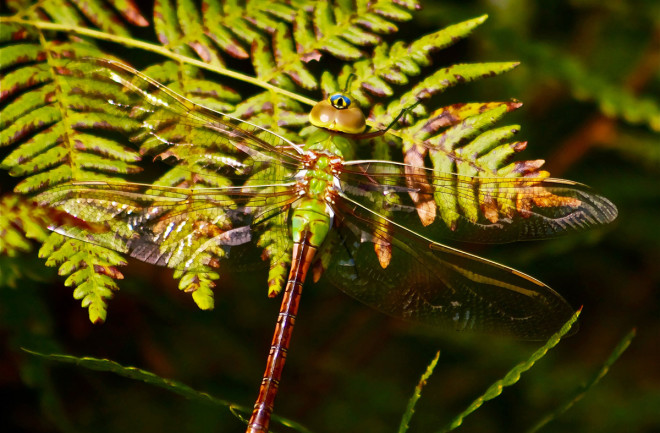 The green darner dragonfly's migration habits were a mystery until conservation biologist Sara Zahendra and team caught enough of the insects to crack the code. | Jerry McFarland

Sara Zahendra and Kent McFarland helped discover something that entomologists had long suspected: Green darners, a species of dragonfly, are nomads at heart.

Working with colleagues, the pair, both biologists at the Vermont Center for Ecostudies, found that some green darners zoom hundreds of miles north in the spring, seeking breeding grounds with fewer rivals and predators. Others, hatched in the north, zip south in the fall to escape the cold.

The key to unlocking the insects’ birthplace was a chemical signature lifted from their wings. But before the researchers could decode this critical clue, they had to catch some dragonflies. Zahendra and McFarland led that effort and, relying heavily on volunteers, ultimately rounded up 852 dragonflies. Here, Zahendra describes their first collecting trip in 2012, at Newnans Lake in Florida.

In Her Own Words

The bet was loser pays for dinner. We knew a great barbeque place down the road. I was sure I was going to get more dragonflies than Kent, but they were flying above my reach across this field.

Kent is about a foot taller than me, and he uses this over-sized insect net he calls Big Papi, like the baseball player David Ortiz. Kent thinks catching dragonflies is like hitting a baseball. “Don’t duff on the first pitch, Zahendra,” he says. Once you swing at them with the insect net and miss, dragonflies will avoid you.

They were avoiding me. But I still chased them, even though I know they fly 35 miles an hour. I jumped in the air. I spun in circles. It was like ballet. I found some Spanish moss and stuck it in my hair to cloak myself, but it didn’t work. We were both laughing. There is something about being bested by an insect over and over. There was this guy who saw us from a pickup truck; he probably thought we were doing some weird performance art.

I got one dragonfly that day. I was elated.

The barbeque place served the best fried okra I’ve ever had. What I remember about that day is not who paid for dinner, but how hard I laughed.

[This article originally appeared in print as "Dragon Races."]