Cute and Cuddly Herbivores Can Be Bloodthirsty Savages 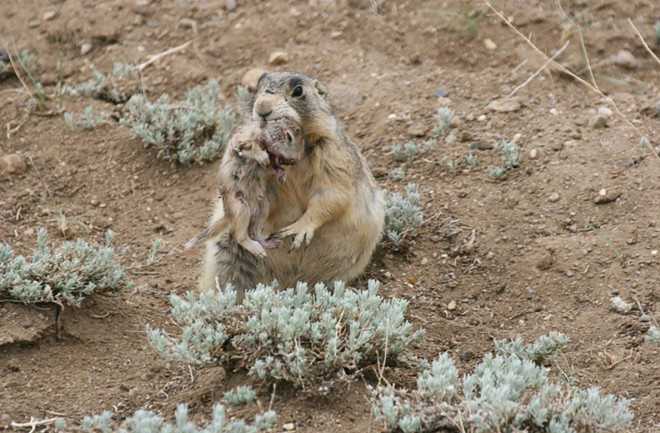 Prairie dog lovers got a shock last week when researchers discovered that the cuddly burrowers had a mean streak.

Multiple white-tailed prairie dogs in western Colorado were observed chasing down and killing ground squirrels in the vicinity of their dens, ripping into them with their jaws and shaking them from side to side with enough force to snap their necks. This behavior was initially surprising, because prairie dogs are herbivores — peaceful plant eaters, right? Far from it. After killing their prey, the prairie dogs left their victims to rot under the sun. Occasionally, they’d pick at their chest or brains to ensure they were dead.

But they aren’t the only vegetarians in the animal kingdom to break bad.

Much of the surprise at prairie dogs’ vicious behavior stems from a mistake commonly made when observing animals: assigning human traits and values to critters. It’s heartwarming to see videos of dogs caring for kittens as their own or elephants mourning their dead, but that’s because we tend to anthropomorphize animals.

Far from being a moral and empathetic world, the animal kingdom operates on economical terms, says John Orrock, a professor in the department of Zoology at the University of Wisconsin-Madison. Viewed through the lens of a simple cost-benefit analysis, aggression is simply another way to get ahead.

“From a behavioral ecology perspective, it’s actually that simple,” says Orrock. “It all translates down to how much does it affect your survival and how many offspring can you leave.”

“This is just an extension of resource competition between females that need ample food to sustain lactation,” wrote Tim Caro, a professor of wildlife biology at the University of California-Davis in an email to Discover. “Usually aggression occurs between females of the same species. Here it is extended to other species…all species can be aggressive if the resource over which they are fighting is valuable enough.”

Herbivores Have a Taste for Bloodshed Too

Examples of violence abound throughout the herbivorous animal kingdom. From angry hippopotamuses to cows eating chickens to cannibalistic armyworms, aggression is just another tool that organisms use to increase their chances of surviving and reproducing.

Red deer in Scotland have been observed targeting seabird chicks, tearing off their heads and extremities while leaving everything else intact. The specificity of the behavior, paired with the fact that deer can’t digest flesh, led researchers to theorize that the deer are attempting to make up for a calcium deficiency, a crucial ingredient for antler growth. They seemed to use baby birds as a multi-vitamin of sorts (the video below may be difficult for some to watch).

Tadpole species offer a particularly brutal example, according to Orrock. Born in short-lived pools of water, young tadpoles have a brief amount of time to transition from aquatic to terrestrial creatures before their home dries up. When their diet of plants doesn’t provide enough nutrition, Orrock says, some species will turn on each other in a frenzy of cannibalism in an attempt to speed up the process of metamorphosis. Of course, tadpoles eventually grow up and develop a taste for insects as frogs.

Hippos too, already one of the most aggressive animals in Africa, have been documented displaying cannibalistic behavior, though only rarely. As with tadpoles, it seems to be a reaction to extreme circumstances, rather than the norm, another case where the balance of costs and benefits tipped in favor of bloodthirstiness.

What then should we make of animals that embrace what we’d call kindness and generosity? Not all creatures display the murderous inclinations shown by prairie dogs. Working together has its advantages as well. Coyotes that hunt in packs can bring down much larger prey. Warthogs and mongooses have their own special relationship too — the mongooses get a free meal of tasty ticks, while the warthogs stay clean and parasite-free. Numerous instances of cooperative behavior both within and between species illustrate that cooperating has its advantages as well.

“The behaviors that you exhibit are presumably a subset of all possible behaviors that could have been found in that particular species,” says Orrock. “And if you still see it today, it’s likely a successful strategy in that context. And what’s interesting is that context really matters.”

In other words, the capacity for both gentleness and brutality exists in all creatures, no matter how cute or terrifying they may look. What we humans call good and evil may, in the animal world, has an explanation that rests less on morality and more on expedience.

While it is tempting to bring human qualities such as anger and vindictiveness into the equation, the animal world is by all accounts a much simpler place.