Curiosities of the Deep Revealed in First Census of Sea Life 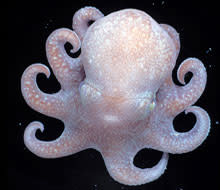 Using boat, tags, nets, and submarines, marine biologists from 82 nations have been canvassing the oceans for the first Census of Marine Life, an ambitious effort to get a rough tally of all the creatures in the world's oceans. The 10-year project is expected to conclude in 2010, and researchers say the broad survey will help them observe changes to marine ecosystems. Says co-senior scientist Ron O'Dor:

"We are moving into this period of global warming, which is resulting in the acidification of the oceans, melting of the polar ice cap. We can use the first census as a benchmark to see what happens in the oceans over the next decade or more" [BBC News].

Although the project still has two years to go, researchers have already made a host of startling discoveries, many of which will be discussed this week at the World Conference on Marine Biodiversity in Valencia, Spain. In one study, researchers conducted a genetic analysis of deep sea octopuses from around the world, and determined that most descended from a common ancestor species that still lives near Antarctica. Researchers believe that octopuses

white sharks traveled thousands of kilometers to spend six months at what researchers called the "White Shark Cafe" in the Pacific between Hawaii and California. "During this time, both males and females make frequent, repetitive dives to depths of 300 meters" it said. Researchers said the purpose was unknown but may be linked to food or reproduction [Reuters].

Researchers didn't confine their studies to large and dramatic marine animals like octopuses and sharks; the census includes everything from microbes to corals to crustaceans. Overall, the census is evaluating the status of over 230,000 known marine species, and it has already identified 5,300 likely new species.

The researchers say changes in the ocean driven by a warming climate, overfishing and environmental damage add urgency to their effort.... "I would say we are in a second Golden Age of marine biology," says project scientist Patricia Miloslavich, ... comparing today's efforts with those of earlier naturalists such as Charles Darwin and Carl Linnaeus, who first set out to catalog species. "I hope it doesn't end" [USA Today].

Related Content: 80beats: Fish Living in a 5-Mile Deep Trench Caught on Film 80beats: Coral Reefs Could Die Off Within the Century 80beats: Embrace the Sharks, Before It's Too Late DISCOVER: Sweeping the Ocean Floor has the full story of the Census of Marine Life Image: M. Rauschert/Census of Marine Life