Culture shapes the tools that chimps use to get honey

There is a deep hole in a tree trunk and within is a tasty dollop of sweet, nutritious honey. It's a worthwhile prize for any animal skilled or clever enough to reach it, and chimpanzees certainly have both of these qualities. But the solutions they find aren't always the same - they depend on cultural traditions.

Chimps from the Sonso community in Uganda are skilled at the use of sticks and unsurprisingly, they manufacture stick-based tools to reach the honey. Chimps from the Kanyawara community in a different part of Uganda have never been seen to use sticks in the wild. Instead, they bring their considerable leaf-based technology to the fore, using leaves a sponges to soak up the hidden honey. 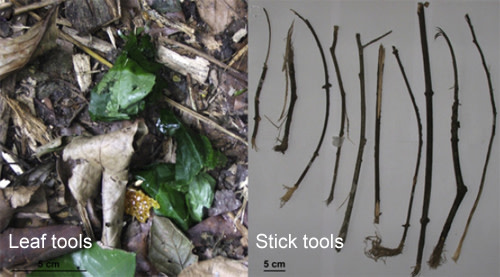 This is hardly the first time that chimps have demonstrated cultural traditions. Chimps in different parts of Africa have their own peculiar styles of tool technology and these variations are some of the strongest pieces of evidence for the existence of animal culture. Captive chimps can also transmit traditions between each other, once seeded by scientists.

But some sceptics are unconvinced. Their riposte is that genetic or environmental differences could equally have shaped technological differences. Alternatively, faced with abstract problems in captivity, chimps could learn solutions through trial-and-error, rather than picking up answers from their peers. To discount these possibilities, Thibaud Gruber from the University of St Andrews wanted to see if different groups of wild chimps would solve new problems in different ways, even though they shared similar genes and environments.

He found two groups of participants in the Sonso and Kanyawara communities of Uganda. Both live in forests and both are genetically similar enough that you couldn't tell which group an individual chimp belonged to based on its genes. And both groups like honey.

When the chimps weren't around, Gruber drilled holes in fallen logs, filled them with liquid honey, and dotted honeycombs around the rim to alert passing chimps. For such chimps, it would have been an unusual sight - they often rob beehives but the holes they pilfer are on vertical trunks, and the honey is solid, waxy and easily reachable.

If the hole was shallow, the chimps from both communities could use their hands to get the honey. For deeper prizes that could only be reached with tools, their strategies strongly differed - some of the Sonso chimps sponged the honey up with leaves, while almost all of the Kanyawara chimps dipped into it with sticks. No Sonso chimp used sticks and no Kanyawara chimp used leaves. 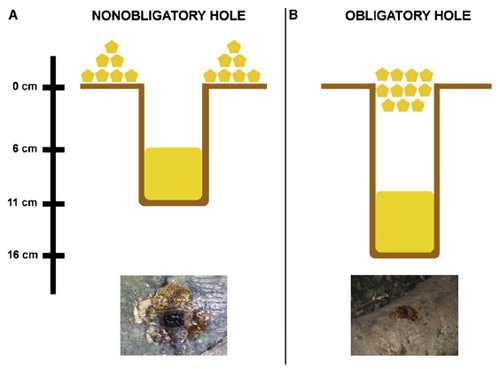 Gruber thinks that it's extremely unlikely that the chimps were using a trial-and-error method to extract the honey, for they solved the problem both quickly and accurately. Despite having similar environments, genes and tasks, the two communities had their own specific approaches to the task. Their divergent cultures are reflected not just in the tools they used, but their

Kanyawara chimps try to eat honey about twice a month, and they succeed on around half of their attempts. In Sonso, honey is a much rarer part of the chimp diet. At both places, bees attack invading chimps with equal ferocity, but the Kanyawara group have become persistent and learned to regularly revisit the same spot. The Sonso group only eat honey when the opportunity presents itself. It's no surprise then that the Kanyawara chimps spent longer in their quest for the hidden honey than their Sonso peers.