Cryptolacerta and the rise of the worm-lizards 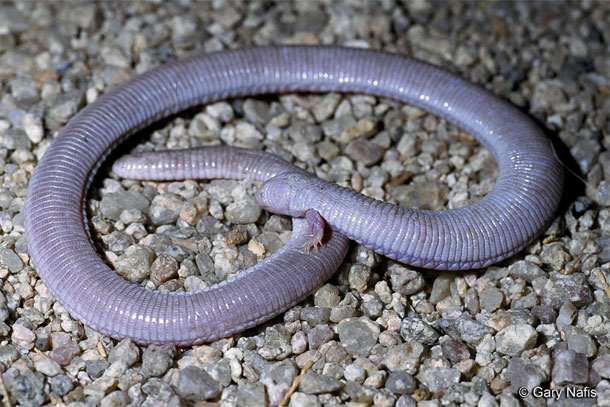 This animal is not an earthworm. It is long and sinuous, it lives underground, and its flanks look like they’re lined with rings. But it is not an earthworm - after all, it has a skeleton, jaws, scales, and two stubby legs. It is a “worm lizard” or amphisbaenian. Amphisbaenians are a group of burrowing lizards, and one of the most mysterious groups of reptiles. They’re named after Amphisbaena, a Greek serpent with a second head on its tail – indeed, amphisbaeneans do have tails that look a bit like their heads. They are meat-eaters, and they search for their prey underground, burrowing through the soil with strong, reinforced skulls. Most species are completely legless, but four of them – the ajolotes (including the one in the photo above) – have bizarre, stunted arms. Their origins are mysterious. Their bones suggest that they are close relatives of snakes and obviously, neither group has any legs. But their genes tell a different story – they say that the amphisbaenians are most closely related to the lacertids, a common group of lizards. Now, Johannes Muller from Berlin’s Natural History Museum has found a fossil lizard whose features might settle the debate in favour of the lacertid camp. Muller named his animal Cryptolacerta hassiaca, which means “hidden lizard from Hesse”. He found it in the Messel Pit, a disused quarry near the town of Hesse. The quarry has no shortage of famous former residents, including the over-hyped Darwinius, the giant bird Gastornis, and leaves that were scarred by fungus-infected ants. Cryptolacerta is the latest addition to this treasure trove of famous fossils 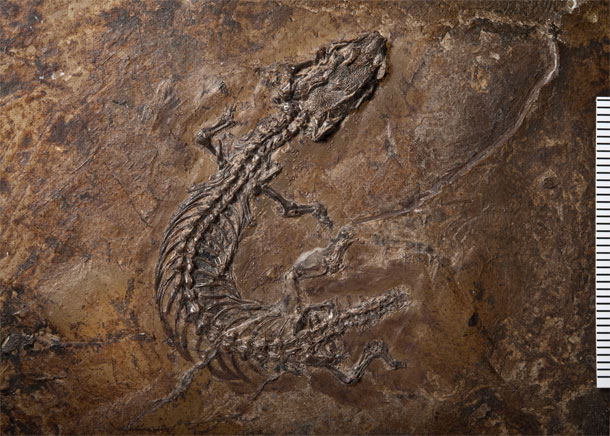 Muller used a CT scanner to get a glimpse of Cryptolacerta’s body, which was fully preserved except for the tip of its tail. Its huge skull has many features that are characteristic of amphisbaenians, including small eye sockets, indicating tiny eyes, and heavy thickened bone, making it strong and inflexible. That’s a far cry from the light, bendy skulls of snakes. Its body, however, looks far more lizard-like – it obviously has four legs, albeit small ones. Muller compared Cryptolacerta’s features with those of other modern reptiles, and produced a family tree that linked them together. Cryptolacerta itself sat at the base of the amphisbaenean branch – it was an early member of the group. Meanwhile, the amphisbaenians and lacertids sat on adjacent branches, far away from the snakes. This supports the genetic view: amphisbaenians are closely related to lacertids, and their superficial similarity to snakes is a great example of convergent evolution. They both evolved long legless bodies in independent ways. With its legs and squat body, Cryptolacerta clearly wasn’t the specialist burrower that the amphisbaenians have become. By comparing its shape to other lizards, Muller thinks that it spent its days hidden among the leaf litter, burrowing from time to time when the opportunity arose. This concealed lifestyle may have been an intermediate step between open-air scurrying and fulltime burrowing. Many burrowing animals, from worms to legless lizards (and there are at least 8 groups of those), have long bodies and no limbs, so it’s tempting to think that these features are a prerequisite for an underground life. But Cryptolacerta, with its reinforced skull, tells a different story – it suggests that early amphisbaenians adapted to a digging lifestyle headfirst. Only after they thickened their skulls did they lose their legs and lengthen their body. Reference: Muller, Hipsley, Head, Kardjilov, Hilger, Wuttke & Reisz. 2011. Eocene lizard from Germany reveals amphisbaenian origins. Nature http://dx.doi.org/10.1038/nature09919Image by Gary Navis and Robert Reisz More on lizards: