Parental behavior is common in crocodiles. And that’s not surprising when you get to know their evolutionary history. 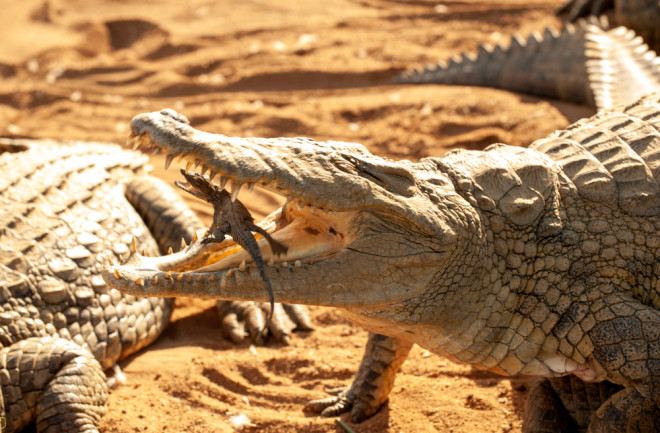 Crocodiles are stealthy hunters. When prey approaches, they stay submerged until the last moment, then launch their huge, muscular bodies out of the water with astonishing speed to grab their prey. At this moment, they use their sharp teeth to chomp down with tremendous force — almost 250,000 pounds per square inch. It’s no wonder crocodiles stalk people’s nightmares.

But there’s a surprisingly warm side to these cold-blooded animals. They can be, according to the American Museum of Natural History, “doting parents.”

Mother crocodiles usually dig a hole, lay eggs and cover the nest. But unlike snakes and turtles, the mama croc hangs around to keep an eye on things. Any animal who comes by with a taste for her eggs is likely to end up as dinner itself — or at least chased off by a ferocious, angry female croc.

When the nestlings are ready to hatch, they start chirping. The mother hears this and comes over to open the nest and help the little ones work their way out of the eggs. “This is a group of species that has the most powerful bite in the animal world, and yet they can pick up an egg and roll it in their mouth gently enough to crack it so that a hatchling can emerge and swim away,” says Frank Mazzotti, a wildlife ecologist at the University of Florida. In many cases, the mother croc gently takes the babies into her mouth and carries them to the water’s edge.

In some species and in the right conditions, mom sticks around even longer. The extent to which a crocodile matriarch tends her young after hatching depends, at least in part, on where she’s placed the nest, says Mazzotti. If the babies hatch in an area that’s ideal for them to find food and develop, then the mom is likely to stay around for a few months and continue to protect them. If they need to go farther afield to find a more suitable place to grow, she encourages the little ones to disperse to find some better options.

Meanwhile, most male crocs are not involved in caring for the young. However, Mazzotti says that dads of the Gharial species of crocodile, which is found in India, do typically spend a great deal of time tending their offspring.

Most people find this behavior rather shocking — and not just because we tend to think of crocodiles as vicious killers rather than besotted parents. Turtles and snakes generally lay their eggs then scarper, leaving the young on their own to deal with hatching, finding food, and learning to survive. It’s natural to expect that crocodiles would do the same. But as it turns out, crocodiles are not as reptilian as you may think.

We commonly think of crocodiles as reptiles, yet crocodiles’ closest relatives are birds and dinosaurs. Technically, vertebrates include all mammals in one category, while reptiles like turtles, snakes, and lizards fall in another. And another vertebrate group contains crocodiles, birds and dinosaurs, explains George Amato, director emeritus of conservation genomics at the American Museum of Natural History. “There’s been a lot of attention to the fact that birds are essentially a lineage of dinosaur that survived the extinction,” he says. “But a lot of people don’t know that crocodiles are actually the closest living animal to the bird and dinosaur group.”

In this context, their parental habits make sense. “We all know that birds show extraordinary parental care. Now we observe that crocodiles do, too,” Amato says. “This is one of the reasons scientists hypothesize that dinosaurs also showed parental care. It seems to be a characteristic of that whole group.”

But we still have work to do to protect these water-loving animals. The rebound of crocodile populations is occurring just as the human population grows significantly and we farther expand into many animals' territories. “The next conservation problem we’re going to have to solve is teaching people how to live with crocodiles,” Mazzotti says. “People don’t understand what the right relationship with predators is, and they fear them way out of proportion to the threat.”

Perhaps learning to live with crocodiles might be easier now that we know they have a soft side.