Craft Beer’s Quest For The Funky Flavors of Wild Yeast 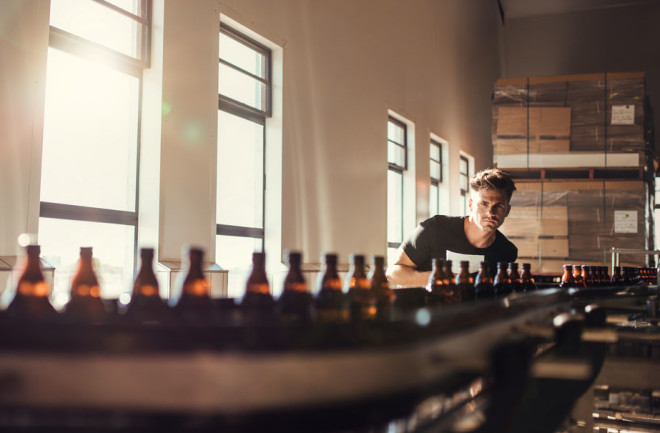 A brewer watches beer bottles track down a factory line. (Credit: Jacob Lund/Shutterstock) Whether your preferred pint is crisp or hoppy, fruity or caramelly, you owe a lot to the single-celled fungus doing the important work of putting the booze in your brews. Hops may get most of the love on the craft beer scene, but yeast is an overlooked heavy-hitter when it comes to giving beer flavor. “Cool people are obsessed with yeast,” says Simon McConico, co-owner of Milwaukee’s Vennture Brew. “It’s because hops are sexy; yeast is a bit more nuanced.” He adds, “Yeast is starting to get more sexy among nerds.” Scientists are buying in, too. Ever since a microbiology expedition to the mountains of Patagonia uncovered a new wild yeast species in 2011, scientists have been hard at work on ingredients that may soon bring totally new flavors to a beer near you.

The art of brewing can be broken down into a just a few key steps. First, grains are soaked until they start to germinate; then they’re roasted. Roasting is the first beer flavor checkpoint: lighter roasts might get turned into pale ales or pilsners; darker roasts into porters and stouts. Then this malt gets mashed and boiled, which converts the starches in the grain into sugars. Hops are added to make the wort — hot, sweet food for yeast. That’s when it’s ready-to-ferment. Yeast arrives and eats up the sugars, turning them into alcohol, carbon dioxide and flavor compounds. However, just two yeast species are currently used to make beer: Brewer’s yeast (Saccharomyces cerevisiae) and lager yeast (Saccharomyces pastorianus.) The former comes in hundreds of strains, which can impart all sorts of different flavors on a beer.

If you’ve tasted banana, butterscotch or clove in a beer — that’s a byproduct from the yeast. You might find flavors that are spicy, sweet, tangy, medicinal or even musky. And just last year, the yeast flavor palate was really rounded out after scientists engineered yeast to produce the bitter yet aromatic flavors of hops

Sierra Nevada Brewing Company's North Carolina location. (Credit: digidreamgrafix/Shutterstock) A lot of major breweries have a main house yeast strain they use for most of their brews. Stone, for example, uses a strain that originated at a now-defunct Canadian microbrewery

and is cultured at beer-yeast-powerhouse White Labs

. Lagunitas and Sierra Nevada are rumored to have house strains, too. These brewers get clever with different grains, hops, recipes, and techniques to come up with new pints. Some beer fans speculate that reliance on a house strain gives these mega-craft brews a signature flavor, for better or for worse.

A Literal Quest for Lager Yeast

Hundreds of years ago, brewers figured out that if they turned down the temps during the brewing process, they’d end up with the crisper, cleaner beer that still dominates the beer market today: lagers. Now we know that those lower temps are critical because they keep rogue yeasts and bacteria out of the brew. Only lager yeast can tolerate the cold.

Louis Pasteur, the godfather of yeast. (Credit: Everett Historical/Shutterstock) For a long time, the lager yeast itself was a bit of a mystery. For the first century or so that we even knew it existed, we thought it was its own species: Saccharomyces pastorianus, named after Louis Pasteur, who discovered that fermentation was caused by living organisms. But in the 1980s, scientists discovered that lager yeast wasn’t a species of its own at all, but a hybrid: a cross between the common brewer’s yeast used in all the other ales, and something else. Something else, not yet known to science, which passed on the critical characteristic of cold tolerance to the lager yeast. This wild lager yeast ancestor remained a mystery for decades, until a microbiologist on a sampling expedition in Patagonia found a new Saccharomyces species growing on a beech tree in a remote mountainside in Patagonia. In the cold. It was the missing yeast. They named it S. eubayanus. And its discovery in 2011 has opened up a new realm of possibilities for scientists — and brewers.

Everything Worth Knowing About ... Yeast

New Yeast On The Block Chris Hittinger is a University of Wisconsin microbiologist who’s researched Saccharomyces for years. He says this wild yeast discovery was a big step forward for the field. Since then, his lab has been setting the groundwork that could set us up for some pretty sweet brews in the future. First, his research team figured out exactly how the wild yeast crossed with brewer’s yeast to make lager yeast. Through experiments crossing the two yeasts, they learned that the key to cold tolerance in lager yeast was in the mitochondria

— organelles that make energy for the cell and hold a little bit of DNA — coming from the wild yeast. This find allowed them to re-create lager yeast in the lab — which means new lager yeasts could now be developed from new crosses. “There’s just a lot more genetic diversity on the table,” says Hittinger. Next they studied whether they could coax the wild yeast to evolve into something that could be used to brew. On its own, the wild yeast wouldn’t cut it as a beer fermenter. Maltotriose, the second-most abundant sugar in brewing worts, is too big of a molecule for nature’s version to eat. In search of a solution, the scientists set out on an experiment that created 1,000 generations of wild yeast grown. It failed. Then they switched gears, instead trying to select for a wild yeast that was extra good at eating a different sugar: maltose, the most common sugar in brewing worts. Within two days, their yeast could grow four times more rapidly when given maltose. And, thanks to some genetic serendipity, it also gained the ability to digest maltotriose

. They'd succeeded on accident. Hittinger’s team had created a version of the wild yeast that could be used in lager production. But it’s a whole different species, meaning it could make a lager with a completely different flavor profile than we’re used to. What kinds of flavors? “One thing you get from the wild is what the industry calls phenolic off-flavors. And we’re starting to get to the genetic basis of what those flavors are,” Hittinger says. “We know that for some beer styles, those basically drive consumer preferences: like Weiss beers, Chimay-style, Trappist [beers], those are key flavor components and those come through in the wild lagers.”

Heineken was first to step up to the plate after news broke of the wild yeast discovery. They released their first “wild lager” back in 2017, named H41 for the latitude where the yeast was discovered. It’s not clear how Heineken’s brewers got around the issue of the wild yeast not digesting all the sugars — their brew came out more than two years before Hittinger’s lab developed the new maltotriose-digesting strain. But harnessing the flavors of wild yeasts isn’t exactly new to brewers. Before they opened, a proto-Vennture brew used yeast collected from peach trees down the road from the brewery. McConico explains that yeast is all around us in the environment. “You can basically culture yeast out of anything,” he says. “Whether or not it will ferment is a different story.” Farther back in time, wild yeasts gave traditional “Farmhouse Ales” their unique-to-the-barn-it-was-brewed-in flavors. Modern beers, especially sours, are once again embracing some of these natural flavors, looking beyond strains of the traditional brewer’s and lager yeasts to species like Brettanomyces to ferment their wort. And last year, a group led by biologist Richard Preiss from the University of Guelph sequenced strains of traditional Norwegian Kveik

) yeast, learning that they are a genetically distinct subset of common brewer’s yeast — strains that have been passed down through generations by local Norwegian brewers and have some interesting qualities. Global brewers are interested in Kveik because it can brew faster and at a hotter temperature than other strains of brewer’s yeast. “Since craft beer has grown so much, people are looking for ways to be new and interesting,” says McConico. “Wild yeast could mean a new flavor, a new aroma.” But whatever yeast strain is the current favorite for a brewer, scientist, or beer-drinker, it matters less than the great blessing that is yeast. “If you have no yeast then you have no alcohol

Malt: Short for malted grains, usually barley, but could also be wheat, rye, or anything else. Soaking the barley allows it to germinate, then heating stops the process. This roasting stage has the first impact on flavor: light roasts might get turned into pale ales, golden ales, or pilsners. More and more roasting leads to darker and darker malts and darker and darker beers. Wort: The brewer’s concoction of everything-but-the-alcohol. The malt has been mashed and heated so the starches in the grains are converted to sugar. Hops and any other ingredients have been added. Wort is hot and sweet and ready to be fermented into beer. Hops: Famously bitter, hops can also give fruity, floral and other tastes to beer. The part of the hop plant, Humulus lupulus, that’s used in brewing is the flower, traditionally dried and available as pellets or occasionally “whole leaves” (don’t be fooled, these are still petals.) A popular trend is to “wet hop” a beer, which adds fresh instead of dried hops to the wort — Sierra Nevada’s Harvest Ale was the first wet hop IPA in 1996

. Wild or open-air fermentation: The beer tank is literally open to whatever might fall inside. Before Louis Pasteur and sterilization, all beer was made this way. Now, traditional beers are more controlled, while open-air fermentation is making a comeback because of the interesting flavors wild yeasts and bacteria can introduce. Saccharomyces: The O.G. brewer’s yeast. S. cerevisiae is the most well-known, and is used in beers, wines, and breads worldwide. Hundreds of ale yeast strains are available that can give beers different flavors, with names like American Ale 1056 and Old Sonoma Ale WLP076. Lager yeast, S. pastoralis, is cold tolerant and is actually a hybrid between S. cerevisiae and its wild relative S. eubayanus, which was only found in the wild for the first time in 2011. Brettanomyces: A yeast that ferments like Saccharomyces but is slightly less predictable, works slower, and is likely to give your beer a funky taste (good or bad — if you’re not making a sour, you might want to make sure to keep Brett out of your brew.) Lactobacillus and Pediococcus: Not yeasts, but species of bacteria. Lacto and pedio eat the sugars in the wort, just like the yeasts do, but turn the sugars into lactic acid instead of alcohol. Lactic acid tastes sour: You might find it in a gose, lambic, Berliner weiss or Flanders red. Wine: Technically referring to fermented grapes, the term also sometimes gets thrown around to describe beverages that are closer to beers but have higher alcohol contents. Examples include barley wine (really just a strong beer), honey wine (also known as mead, though it sometimes does have fruit or grains added, blurring the taxonomy) and rice wine (or sake — no grapes here.)