Cradle of Civilization in Peril

Militants wage war on the culturalheritage of an entire region. 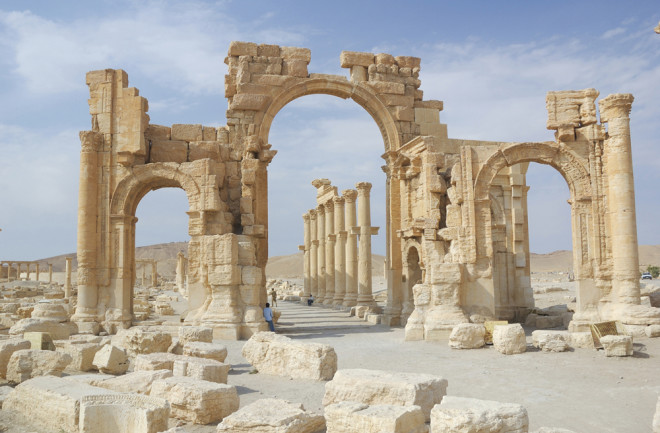 Much of Syria's millennia-old city Palmyra, including its Arch of Triumph, was destroyed in 2015 by the so-called Islamic State. | Rafal Cichawa/iStock

In the mid-13th century, a Mongol invasion cut a wide swath of cultural ruin through the Middle East, including the destruction of the great library of Baghdad. It took the region centuries to recover. Today, many Iraqi and Syrian archaeologists evoke this infamous chapter in medieval history to convey some sense of the devastation wrought by the so-called Islamic State (ISIL), along with the continued brutality of more than four years of civil war in Syria.

While all the key belligerents in the conflict regularly commit cultural property crimes, ISIL stands out as the most brazen and egregious. Its militants expanded the targeting of cultural heritage in 2015 to ratchet up sectarian tensions, fund terrorism and promote their global franchise.

ISIL mainly targets Muslim architecture and monuments for destruction, and it sells looted antiquities and other portable cultural property for funding. Only occasionally do fighters destroy pre- Islamic material for the cameras: In the first months of 2015, ISIL militants overran the Mosul Museum, smashing many of the collection’s artifacts, and took bulldozers and sledgehammers to Iraq’s fabled first millennium B.C. cities of Nineveh, Nimrud and Hatra, a UNESCO World Heritage site. In April, UNESCO Director General Irina Bokova accused ISIL of war crimes for these and other acts of destruction. The extremists continued their campaign in August with the destruction of important sites in the ancient desert oasis city of Palmyra, another World Heritage site.

Some might ask, “Why should we fret about ‘old stones and bones’ amid the human suffering of this conflict?” We do not face either-or decisions between saving lives or culture: The two are inextricably linked. By protecting heritage, we defend cultural identity. Radical extremists understand the power of heritage — they fear and loathe it, hence their obsession with pulverizing symbols of resistance and diversity.

At the same time, cultural property protection undercuts terrorist financing. Beneath its thin ideological veneer, ISIL operates as an organized crime enterprise. As with other transnational criminal groups, antiquities crime provides a reliable and lucrative source of revenue and means of money laundering. While ISIL talks of destroying “ancient idols,” in truth many of these artifacts are pouring out of the conflict zone for sale on the black market.

ISIL is adept at fusing global jihad, cultural cleansing and cultural property crime. Left unchecked, radical extremists will eradicate the evidence of more than 10,000 years of human achievement in Syria and Iraq, and the problem is spreading. With each looted archaeological site, robbed museum, exploded monument or burned archive, we lose data on the world’s earliest-known agriculture, settled communities, organized religions, state-level polities, writing systems and great empires. Extremists are also stealing the future by destroying cultural assets vital to the tourist sector and by degrading educational and cultural infrastructure.

Syrian and Iraqi cultural heritage experts continue to risk their lives daily to document war crimes and to save our shared cultural patrimony. In August, ISIL militants beheaded archaeologist Khaled al-Asaad, who served as Palmyra’s chief of antiquities for half a century. Asaad had helped move many artifacts to safety before ISIL seized control of the site in May. According to media reports, he was killed because he refused to divulge their location.

From verifying reports of destruction with satellite imagery to monitoring the illegal antiquities market, more than 45 international organizations are involved in the effort to preserve the rich legacy of this region, the Cradle of Civilization. As the poet John Donne observed, “No man is an island, entire of itself; every man is a piece of the continent, a part of the main.”

Michael Danti is the academic director of the American Schools of Oriental Research Cultural Heritage Initiatives.