Could Neanderthals Speak? The Ongoing Debate Over Neanderthal Language

It's surprisingly hard to prove one way or the other. 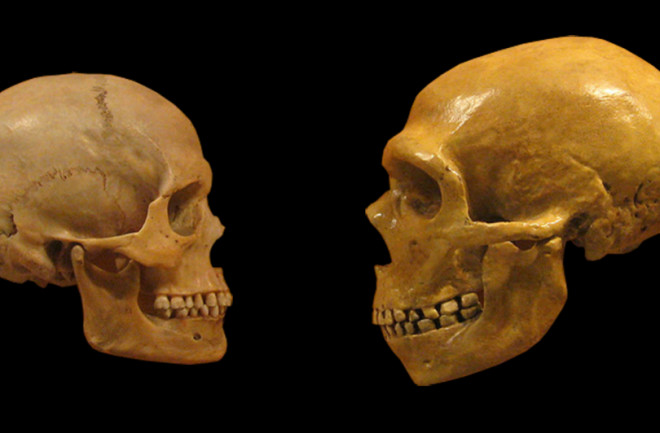 Being a generalist specialist, a unique niche, is the hallmark of our species, say researchers — and the reason Homo sapiens (left) are still around but other hominins, including Neanderthals (right), are not. (Credit: Wikimedia Commons)

Did Neanderthals have language? Before trying to answer that, I should admit my bias: I’m team Neanderthal. As an anthropologist who studies our evolutionary cousins, I’ve seen plenty of evidence suggesting Neanderthals were competent, complex, social creatures. In light of their apparent cognitive abilities, I’m inclined to believe they had language.

But I can’t prove it, and no one else can, either. To date, there’s no evidence that Neanderthals developed writing, so language, if it existed, would have been verbal. Unlike writing, spoken languages leave no physical trace behind. Our words vanish as soon as they’re spoken.

The best researchers can do is to analyze Neanderthal fossils, artifacts and genes, looking for physical and cognitive traits considered necessary for language. And even after scrutinizing this same body of evidence, experts have come to different conclusions: Some say language is unique to our species, Homo sapiens; others contend Neanderthals also had the gift of gab. So, while the question remains up in the air, it’s not for lack of trying. Here’s all the evidence we have.

“Really the debate is about what language is,” says Dan Dediu, an evolutionary linguist (who is also team Neanderthal).

Part of the reason scientists disagree about Neanderthal language is because there are different definitions of language itself. Without straying too far into academic debates over the nature of language, let’s just say there are broad and narrow theories when it comes to what actually constitutes language.

A broad view defines language as a communication system in which arbitrary symbols (usually sounds) hold specific meanings, but are not fixed or finite. Words can be invented, learned, altered and combined to convey anything you can think.

Narrow definitions focus on syntax and recursion, structural properties shared by all human languages today. These both refer broadly to the set of rules that guides how statements can be formulated in any given language, and they are thought to be hardwired into our brains. By this view language is “a computational cognitive mechanism that has hierarchical syntactic structure at its core,” in the words of biologist Johan Bolhuis and colleagues.

A comparison of the inner ears of various hominin and primate species. (Credit: Stoessel et al.)

Proponents of narrow definitions tend to argue that language evolved exclusively in Homo sapiens as recently as 100,000 years ago. With a broader definition, though, it’s easier to posit language emerging earlier in our evolutionary history, even among other species of the human family tree.

It’s also worth clarifying the difference between speech and language. Although most languages today are spoken, they can also be signed or perceived through touch. Nevertheless, many studies claiming to deal with Neanderthal language actually analyze speech capacity. This is because speech influences skeletal anatomy and is therefore possible to infer from fossils. And, considering the overwhelming majority of human languages are speech-based, it’s reasonable to assume Neanderthal language was too (if they had language).

Terminology aside, what we really want to know is if Neanderthals communicated like living humans. Would a Neanderthal child, raised in a modern human family, learn their language? Could a linguist, sent 60,000 years into the past, interpret Neanderthal language?

Short of inventing a time machine, researchers must infer Neanderthal linguistic capabilities from the remains they left behind. It’s often said that “language doesn’t fossilize”. But what do preserve are language proxies — bones, artifacts and DNA that indicate the presence of language or speech. While no single line of evidence is sufficiently convincing, the preponderance of evidence allows researchers to hypothesize about Neanderthal language.

Let’s begin with bones. Speech and language are mostly soft-tissue operations, requiring organs like the tongue, diaphragm and brain that rarely preserve. However, producing and hearing speech influences some enduring aspects of our skeletons too, including the hyoid bone, ear ossicles and the portion of the spinal canal that holds nerves involved in precisely controlling breathing. Studies have found these features are very similar between Neanderthals and Homo sapiens, but more primitive and ape-like in earlier hominins like Australopiths.

Based on these results, most researchers agree Neanderthals were capable of emitting and hearing complex vocalizations. However, they disagree over the implications. While some consider the findings indicative of speech-based language in Neanderthals, others propose these features could have evolved for other reasons, like singing. Neanderthals may have lacked the cognitive abilities for language, but possessed the physical anatomy for musical calls to attract mates or sooth infants.

To assess if Neanderthals had the brains for language, researchers usually rely on proxies from the archaeological record — artifacts that required the same cognitive prerequisites as language, such as hierarchical organization or abstract symbolic thought. The latter is necessary to encode sounds with meanings and evidenced by artifacts like beads and cave paintings.

So did Neanderthals make those things? Eh, well, maybe. A few cases of Neanderthal ornaments and paintings have been reported, but are so rare that researchers question their authorship and antiquity. However, Neanderthals could have been symbolic in other ways. For instance, at many Neanderthal sites, archaeologists have found butchered wing bones from birds of prey. This could indicate Neanderthals adorned themselves with feathers (which did not preserve) imbued with symbolic meaning.

What DNA Has to Say

The newest data thrown into the mix comes from ancient DNA (aDNA). “I find it both the most convincing and the hardest to interpret,” says Dediu, a scientist with the Dynamique du Langage laboratory in Lyon, France.

The convincing aspect is that ancient genomes have shown Neanderthals and Homo sapiens interbred in several periods during the past 200,000 years. Realizing the groups were biologically and behaviorally similar enough to produce successful offspring has helped many anthropologists believe Neanderthals must have been capable of language.

What’s harder to determine is whether the differences in DNA between us and them had an effect on language abilities. “We don’t understand very well the genetics of cognitive abilities, the genetics of speech [and] language,” Dediu explains.

Geneticists can compare the genomes of Neanderthals and modern humans, letter-by-letter, or gene-by-gene, but we don’t know how this code confers language ability. Some genes, like FOXP2, are definitely involved, as living people with altered versions experience language impairments. Of the major “language associated” genes thus far identified, Neanderthals and Homo sapiens have matching versions. However, some differences have been found in regulatory DNA, which controls where (in which cells), when (during development) and how much putative language genes activate. In sum, DNA may hold answers to Neanderthal language ability, but we don’t yet know how to read it.

The question of Neanderthal language remains an open debate. If they lacked it, language may be unique to Homo sapiens. If they had it, language was likely present at least since Neanderthals and modern humans shared a common ancestor, over 500,000 years ago.

As scholar Sverker Johansson put it, “Once upon a time our ancestors had no language, and today all people do.” Determining Neanderthal language capabilities will help us understand when and how our incredible communicative abilities emerged.