Could a Catastrophe Have Changed the Path of One of the Most Important Cultures of Ancient North America?

A new study claims that a comet influenced the direction of Native American cultures 1,600 year ago. That conclusion is controversial but it reveals the challenge of understanding natural hazards in the ancient past. 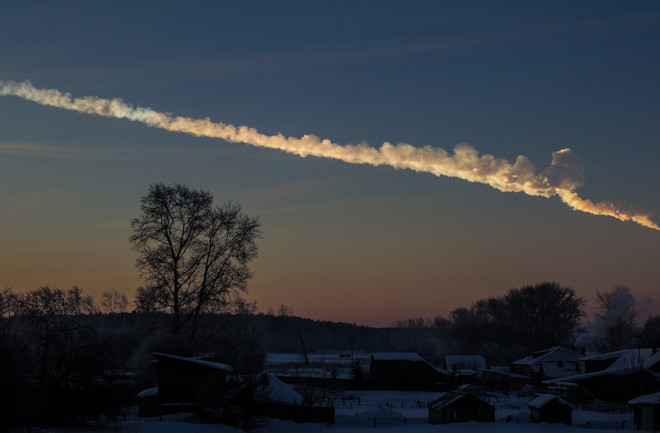 In 2013, a meteorite exploded over Chelyabinsky in Russia. Could a much larger airburst like this have happened over Ohio over 1,600 years ago? Credit: Alex Alishevskikh, Wikimedia Commons.

How can we understand how natural hazards affected humans thousands of years ago? Sometimes we're lucky enough to have written records, like great earthquakes in the Roman Empire and China. Other times, legends and myths can suggest that something disasterous occurred -- events like a great flood or massive volcanic eruption. Human documentation, formal or not, of these events only gets us so far. We need evidence from the geologic record to confirm disasters ... and sometimes to even potentially discover them.

A study recently published in Nature Scientific Reports makes the claim that an airburst event, where a comet explodes in the atmosphere without impacting, may have occured over the Ohio River Valley almost 2,000 years ago. They also suggest that it could have lead to the decline of the dominant culture of the time, people we have dubbed the Hopewell. This is a dramatic conclusion built off of a correlation between the end of the Hopewell era and evidence of an airburst, but correlation doesn't necessarily mean causation.

We don't have a lot of evidence beyond the archeology for the Hopewell. However, the archeology they left behind is spectacular. Some of the largest earthwork structures in North America were built by the Hopewell, including the Newark Earthworks next door to me here in Granville. The Hopewell had extensive trade across the continent and were technologically sophisticated in their construction and design of these monuments.

A view along the Great Circle earthwork in Newark, Ohio. The mound is to the right with the inner moat in the middle. Credit: Kevin Payravi, Wikimedia Commons.

Here is the meat of the study by Kenneth Tankersley (University of Cincinnati) and his colleagues: in a series of sites related to the Hopewell culture, they found microspherules of iron and silica potentially created by a comet or meteorite, elevated levels of iridium and platinum in the soils that could only come from meteorite or comet, evidence that the Hopewell collected meteorite fragments that could all be from the same source and that these sites have potentially contemporaneous evidence of massive fires.

This is all interesting evidence! Finding a layer with increased occurance of comet or meteorite-related materials definitely garners more attention. What is happening in this study is two-fold: can we confirm that an airburst occurred over Ohio and does it somehow impact the history of the Hopewell? That second question is by far the harder to truly assess.

Did an airburst event happen? Maybe! Iridium and platinum spikes are a hallmark of impacts (or near impacts) and there aren't a lot of other options. Microspherules are trickier because the Earth is constantly collecting micrometeorites. We have found dozens on the roofs of buildings here in Granville that likely arrived on Earth in the past few years and they look identical to some in this study.

What about the fires? Tankersley and his colleagues argue that charcoal and "slag-like material" at these sites suggest large, hot fires. They also point to radiocarbon dates that are roughly correlative to ~250-400 CE. They link those fires to the airburst event because that's what was seen near Tunguska in Siberia during that airburst in 1908.

It is an interesting correlation, the charcoal, exotic elements and microspherules that these sites. Yet, an airburst isn't necessarily the only potential cause. Brad Lepper (senior archeologist for the Ohio History Connection), an expert of Hopewell sites, points out that the Hopewell "prepared ceremonial basins and prepared floors that served as crematoria or as burnt offerings of ceremonial regalia," at most of the places mentioned in this study. Could that be the source of the charcoal and evidence of high heat?

My students and I at Denison University have studied some of the strange rocks that show high temperature from an Hopewell earthwork called Snake Den Mound. They are as bizarre as the study suggests, with an appearance like iron furnace slag with molten sandstone and charred plants. Although we don't have much evidence that the Hopewell built furnaces, it isn't out of the realm of their technology to do as much. So, you don't necessarily need an airburst to do it.

How Does Culture Change?

Culturally, Lepper has some issue with the idea that the Hopewell experienced a "cultural downturn" that can correlate with this (or any) event. He points out that "indigenous societies that came after the Hopewell did not abandon the region and in fact experienced a rise in population."

It is true that most large ceremonial earthworks date prior to this potential airburst event ~1,600 years ago. However, other parts of the Hopewell culture persisted, including trade. "They continued to interact with distant regions acquiring such things as marine shell vessels from the Gulf Coast, mica from the southern Appalachian Mountains, and cotton, from either the Southwestern U.S. or northern Mexico," said Lepper.

Instead he suggests that the changes in culture away from building large earthworks was necessiated by increased population where "the extreme levels of cooperation needed to build monumental earthworks would have been impossible to maintain." In this case, no catastrophe was needed but rather gradual change in the culture from other pressures.

Catastrophism in Humanity's Past

Now, this whole argument about how a catastrophic event could have influenced the native people of North America isn't only seen here. The eruptions of Churchhill in the Wrangell Range of Alaska in ~60 and ~850 CE have been potentially linked to the migration of the Athabascan people to the south. This migration lead to the development of the cultures in the desert Southwest. However, just like this Ohio airburst hypothesis, archeologists argue about whether the eruption was the cause or other, not cataclysmic, pressures.

Whatever the link might be, it is fascinating to consider whether an airburst happened over the Ohio Valley and what the people at the time must have thought of such an event. There is a lot of evidence in the Tankersley study to suggest that something happened that introduced these exotic elements to the area.

What would make it even more compelling was to look for the evidence of this airburst away from sites where humans changed the landscape. Do you see these anomalies and microspherules in lakes, river valleys or soils across the region? Do you find evidence of the results of a massive forest fire, like lots of sediment moving into rivers or sliding down slopes. We have some tantalizing hints so far.

The link the changes in the Hopewell maybe be more tenuous. Catastrophism built off of data and myth can be a challenge to "prove," and even more challenging to show that a singular event like an airburst and eruption influences people when no written record exists. We may never know for certain, but exploring these connections is what drives Earth scientists to study the past.