New Date For Greek Eruption That May Have Inspired Atlantis Myth 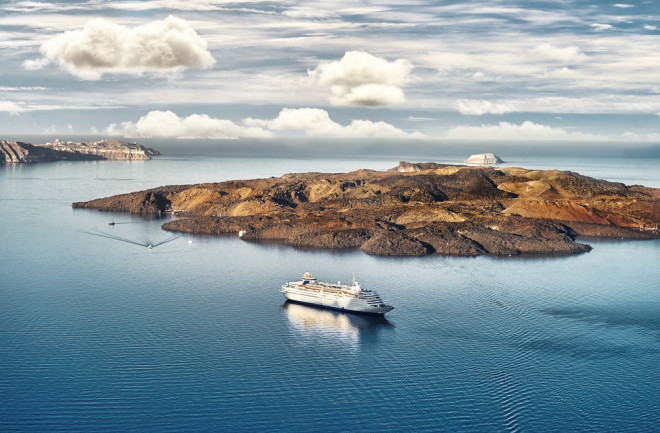 An ancient eruption on the present day Greek island of Santorini devastated the Minoan people, possibly inspiring the myth of Atlantis. (Credit: Aleksandra H. Kossowska/shutterstock) A long-standing controversy over the date of a volcanic blast that possibly inspired the myth of Atlantis may have been resolved with the aid of ancient tree rings, a new study finds. One of the largest volcanic eruptions in the past 4,000 years burst from the volcano Thera on what is now the Greek island of Santorini. The catastrophic eruptions spewed forth about 40 to 60 cubic kilometers of lava, devastating the ancient seafaring Minoan civilization, potentially inspiring the legend of the lost city of Atlantis. The effects of this eruption were felt as far away as Egypt and Turkey. And by pinpointing when this eruption happened, scientists might have a way to tie together the timelines of ancient Greece, Egypt, Turkey and the rest of the Mediterranean. However, precisely dating when this eruption occurred has proven difficult. Entire conferences have focused on the problem, said study lead author Charlotte Pearson, a dendroarchaeologist at the University of Arizona at Tucson. Using written records from Egypt and pottery retrieved from digs across the Mediterranean, archaeologists have estimated the eruption occurred between 1570 and 1500 B.C. However, other scientists analyzing a radioactive isotope of carbon in bits of trees, grains and legumes found just below the layer of ash from the eruption have dated these samples to about 1600 B.C. (Isotopes of an element vary in how many neutrons they possess in their atomic nuclei — atoms of carbon-12, the most common isotope of the element, each have six neutrons, while atoms of rarer, heavier, radioactive carbon-14 each have eight.) "The discrepancy between the radiocarbon and archaeological evidence may be as little as 30 or 40 years, but after years of long-running debate, it hasn't closed," Pearson said.

Charlotte Pearson, an expert in ancient tree ring dating, worked with a team of scientists to better date the volcanic eruption at Thera on the Greek island of Santorini. Some believe the eruption inspired the myth of Atlantis. (Credit: University of Arizona)

Pearson and her colleagues wanted to see if current techniques based on radiocarbon dating and tree rings might reveal a more precise date for the eruption. Each tree ring is a time capsule of the carbon isotopes in which it grew. And carbon-14 radioactively decays at a steady rate, acting like a clock. By analyzing the levels of carbon isotopes within tree rings, scientists can estimate how old tree rings are. Radiocarbon-dating experts around the world rely on an international standard known as IntCal13. This standard was developed over the past 50 years using tree rings extending 14,000 years into the past, and involved using chunks of wood that each combined 10 or so tree rings. However, modern radiocarbon dating can now work on slivers on wood containing just a single tree ring. The scientists relied on this increased resolution to help refine dates for Thera's eruption. The researchers focused on single tree rings from long-lived trees that were alive at the time of Thera's eruption but were growing 7,000 miles apart. Specifically, they analyzed tree rings from Californian bristlecone and Irish oaks ranging from 1700 to 1500 BC — before, during and after when Thera was thought to have erupted. The 285 samples of tree rings revealed that IntCal13 may not accurately represent carbon-14 levels between 1660 and 1540 BC.

The ancient Minoan town of Akrotiri on Santorini was damaged by earthquakes before the eruption, then buried under ash. (Credit: Gretchen Gibbs/Courtesy University of Arizona) "No one should think that this work in any way undermines the validity of radiocarbon dating," Pearson said. "This work is part of a community effort towards improving and refining the existing resource. This is the scientific process in action." Using a new standard based on their updated data, the scientists found that radiocarbon-dating evidence now finally overlaps with the archaeological evidence. It puts the eruption of Thera between 1600 and 1525 BC. "The ruler we used to measure time in the past may need a slight modification," said study co-author Greg Hodgins, a radiocarbon scientist at the University of Arizona in Tucson. The implications of this work may apply not just to Thera, "but to anyone using radiocarbon dating for this period of time," he added. Ultimately, by using both archaeological and radiocarbon data, as well as other lines of evidence, such as by examining ice cores and cave sediments, "I think the Thera eruption will eventually be dated to a specific year," Pearson said. Now scientists need to test these new findings by analyzing more tree rings from a wide range of times, the researchers said. They detailed their results online August 15 in the journal Science Advances.