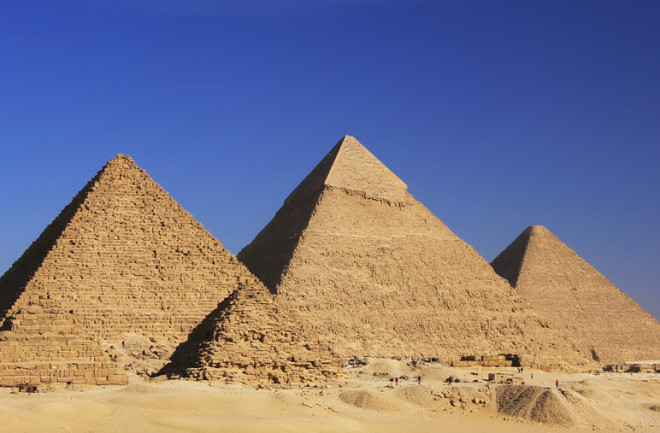 A large chamber, never-before observed, has been discovered in the Great Pyramid at Giza.

The previously unknown space was announced Thursday by an international team of researchers who used cosmic ray detectors to discern the presence of what they call a “big void” inside the pyramid’s structure as part of the Scan Pyramids project. The void lies just above the Grand Gallery passageway that leads to the King’s chamber within the massive monument, and appears to be over 100 feet long.

If the researchers are correct, this would be the first large chamber to be discovered within the pyramid since the Islamic Caliph al-Ma’mun battered his way into the structure in the ninth century. There are currently just three known chambers within the pyramid: An apparently unfinished room beneath the bedrock, and the King and Queen’s chambers which lie deep within the pyramid itself.

The discovery comes thanks to a curious marriage of particle physics and archaeology. Because x-rays, radar and other techniques aren’t particularly well-suited for penetrating layers of dense rock, researchers turned to a more exotic form of radiation: muons. Sub-atomic particles created when high-energy cosmic rays interact with the upper atmosphere, muons rain down on the Earth in droves — there are hundreds passing through you every second. The particles are energetic enough to travel long distances and heavy enough to penetrate solid objects, such as the more than 2 million limestone blocks that make up the Great Pyramid.

Muons aren’t perfect infiltrators, however. Those traveling through dense things like rock will eventually slow down, making them an ideal detector for hidden spaces within things. The use of the technique in archaeology dates back to the 1960s when physicist Luis Alvarez placed muon detectors inside the nearby Pyramid of Khafre to see if any hidden chambers existed inside. He didn’t find any, but the project would establish a precedent for using such detectors in the field. Muon detectors have since been used to image archaeological sites in Mexico as well as volcanoes and nuclear power plants.

A diagram of the pyramid's ibterior showing where the researchers believe the void to be. (Credit: ScanPyramids mission)

A diagram of the pyramid’s ibterior showing where the researchers believe the void to be. (Credit: ScanPyramids mission)

“If you have a muon detector behind or below an object that you want to probe, you are just counting the number of muons that are coming from a given direction, and this quantity of muons, the muon flux, gives you an indication about the integrated or averaged density of matter that you have in this direction,” says Sébastien Procureur, a co-author of the paper and researcher at the University of Paris-Saclay.

If more muons start to appear than expected, it’s an indication that an object might not be solid. At the Great Pyramid, the researchers placed three different kinds of muon detectors in three different locations in and around the pyramid and let them gather data for months at a time. The first two were placed in the Queen’s chamber, which lies beneath the Grand Gallery passageway, and the newly discovered chamber as well. The first detector relied on a kind of emulsion film, similar to that used for old-school photography, to capture the path of muons as they flew by, while the other produced tiny flashes of light that were translated to electrical signals when hit by a muon. Outside of the pyramid, the researchers placed a third detector that tracked the appearance of ions in argon gas as the particles passed through.

Each detector was run by a separate team — the redundancy was purposefully built in to the experiment to make the results more robust, say the researchers in a paper published in Nature. Each detector told the same story — a higher quantity of muons made it through in the same place every time, indicating that a gap of some sort exists in the stone.

The researchers refrain from making any guesses as to what their discovery could mean, however. They can’t even say for sure yet whether their find is one large chamber or several smaller ones. Even their temporary name for the gap — “Big Void” — seems designed to deflate any hyperventilating supposition.

“When we are working, we provide facts. We are not trying to make any interpretations,” says Cairo University professor of engineering Hany Helal and another co-author. “It’s too early from our point of view to go and conclude what is this void.”

The cautious tone could be a response to the sometimes hyperbolic nature of Egyptology announcements. In 2015, Arizona State Egyptologist Nick Reeves announced that he had found what appeared to be another hidden chamber in Tutankhamen’s tomb, which he said could hold the remains of Queen Nefertiti. That claim was subsequently called into question and never verified. Nefertiti herself has been the subject of controversy as well — a 2010 study of ancient DNA purported to have shown evidence that she was not Tut’s mother, although that study was heavily criticized for inaccurately analyzing the genetic samples.

That study’s author, Zahi Hawass, the influential and polarizing former Minister of Antiquities, has been an outspoken critic of the Scan Pyramids team. When they announced last year that they had found evidence of a smaller void just above the north entrance to the pyramid, Hawass downplayed the evidence on the grounds that the pyramid was full of small holes — some have likened the pyramid’s interior to Swiss cheese — and the find was likely meaningless.

“There is a huge slop factor,” says Mark Lehner director of Ancient Egypt Research Associates and member of a committee reviewing the team’s work. “One of the issues I’ve had from the beginning … is that nobody is correctly assessing the baseline data on how many holes the pyramid has to begin with.”

Nevertheless, the sheer size of the void the Scan Pyramids team found indicates that it’s something more than an architectural irregularity. They’ve collected so much convincing data, they say, that their conclusions reach the five sigma confidence level particle physicists typically use to ascertain the existence of a new particle. The new data is enough to sway Lehner, who remained agnostic about their findings in the past but agrees that they’ve certainly found something significant this time.

The void covers an area of more than 100 feet, and is of similar dimensions to the Grand Gallery it lies above. They haven’t been able to give many details beyond that though, aside from placing it anywhere between around 160 and 230 feet above ground. It could be either slanted or horizontal, and there’s no data right now as to how high it might be.

While speculation about the void’s purpose is scant, it could be what’s known as a relieving chamber. Stacked above the King’s Chamber inside the pyramid are five additional chambers probably meant to reduce the weight pressing down on the roof of the chamber and prevent it from collapsing. A similar concept could have been employed above the Grand Gallery.

Regardless of what it may be, we probably won’t know for sure for a while. Permission for destructive exploration of the pyramid is extremely hard to obtain, and other imaging techniques aren’t any better at peering through the thick stone. Allowing the muon detectors to run for longer would grant better resolution images of the void, but they are only so precise. Details about the exact dimensions of the void, to say nothing of possible objects within it, are unlikely.

That doesn’t mean the find is unimportant, however. The robustness of the researchers data means that it’s almost certain that something is there. If nothing else, it is a fascinating glimpse into the laborious and technically demanding construction process that raised the pyramids to the heavens over 4,000 years ago. Archaeologists are still divided on how exactly the Egyptians were able to transport millions of stone blocks, some weighing more than 50 tons, from quarries to the building site and maneuver them into place.

Millennia later, we’re still trying to catch up to them.