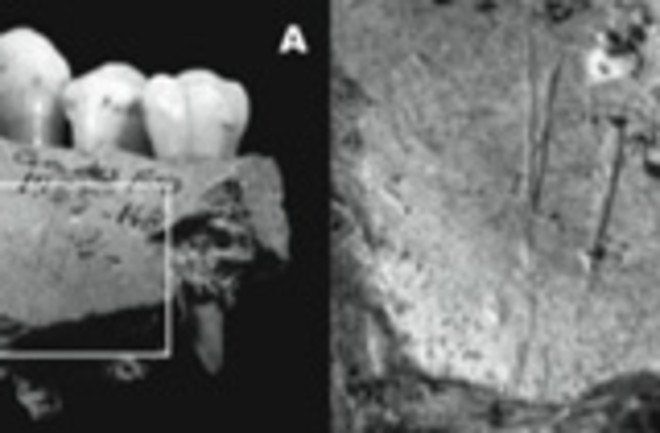 Early humans and Neanderthals may have clashed violently during their brief coexistence in Europe, a new study suggests, and humans may have either eaten their Neanderthal opponents or taken their teeth as trophies. Anthropologist Fernando Rozzi and his colleagues conducted a new analysis of a jawbone found in a cave in southwest France. They say that the jawbone probably belonged to a Neanderthal, and that it shows cut marks similar to those found on reindeer that were butchered by early humans. Rozzi believes that the jawbone was cut in the process of removing flesh and the tongue, a technique also used on the deer that early humans frequently fed on. He believes this proves that Neanderthals were fair game for human consumption, too.

"Neanderthals met a violent end at our hands and in some cases we ate them," Rozzi said.... "For years, people have tried to hide away from the evidence of cannibalism, but I think we have to accept it took place," he added [The Guardian].

But his theory is likely to provoke intense argument from other researchers, who believe that humans and Neanderthals had little interaction. The Neanderthals were a sturdy hominid species distinct from modern humans; they lived

across Europe around 300,000 years ago. They managed to survive several ice ages before dying out around 30,000 years ago, around the same time as human beings arrived on the continent from Africa.... One theory for the Neanderthals disappearance is that they couldn't compete with humans, who had better brains and more sophisticated tools, for scarce resources such as food. Other scientists believe they were more susceptible to the impact of climate change [Daily Mail].

The new study, published in the

has incited debate even within the research team. Says coauthor Francesco d'Errico:

"One set of cut marks does not make a complete case for cannibalism." ... It was also possible that the jawbone had been found by humans and its teeth used to make a necklace, he said [The Guardian].