Conservation Success To Boy's Club: The Hawaii Creeper In Danger Of Extinction 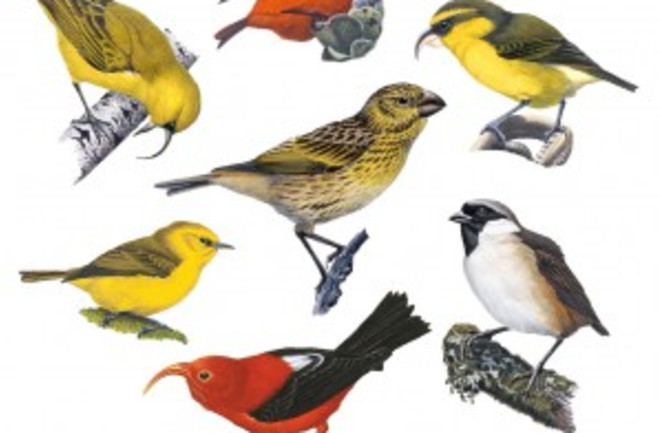 The beautifully diverse honeycreepers. Cover art for Current Biology, volume 21, issue 22 Though most people focus on Darwin's famous birds, I would argue that the Hawaiian honeycreepers are the most dazzling example of adaptive radiation, especially by a finch. From a single finch ancestor arose a stunning diversity of honeycreepers, from the brilliant red I'iwi with its long, curved bill to the small, rotund ʻAkikiki. Over 50 species of these colorful forest birds once brightened the islands from Hawaii to Laysan, putting the 14 Galapagos finches to shame. Their tale is not just one of rapid evolution, though; it's one of a brief and fleeting existence on this planet. All but eighteen are extinct, and of those that remain, ten are endangered or critically endangered and five are listed as vulnerable, leaving only three species that seem to be holding their own against the every-growing list of threats to their survival.

The Hawaii creeper, once hailed as a conservation success, now in danger of extinction. Photo by Carter T. Atkinson , U.S. Geological Survey, from USGS Not surprisingly, the honeycreepers get a lot of conservation attention. On the big island of Hawaii, large swaths of habitat are protected and managed, a last-ditch effort to save the few species that remain. The Hawaii Creeper (Oreomystis mana) is one of these protected species, a small greenish, yellowish bird that exists nowhere else in the world, not even on neighboring islands. Though put on the endangered species list in 1975, the Hawaii creepers seem to be hanging on, breeding better than most of the other species and surviving in the face of introduced diseases that are wiping out their kin. In fact, a 2010 analysis suggested that the populations of Hawaii creepers in the protected forest refuge of Hakalau were on the rebound, increasing even though all the odds are stacked against them. Their apparent rebound in the face of adversity has been trumpeted as a conservation success. But, as University of Hawaii researchers Lenny Freed and Rebecca Cann found out, appearances can be deceiving. The team followed the Hawaii creepers in Hakalau, looking at everything from population size to overall condition. They measured the birds' bill length, weight, fat reserves, and survival. What they found starkly contrasted the positive picture painted by others. The Hawaii creepers aren't "ok"—they're in serious trouble. Firstly, the populations aren't increasing. They're crashing. Freed & Cann found that between 2001 and 2007, the creeper population declined a staggering 63%. But perhaps the worst finding was that the ratio of male to female creepers has changed. Once upon a time, there was an almost even ratio, but by 2008, males were 72-80% of the population. Even if the population was stable, that biased a sex ratio has far-reaching consequences. A population can't maintain its size without enough females to produce the next generation. Over time, less females means less babies, and less babies means future declines. A similar trend was found in another honeycreeper species, the Akepa. This turned out to be a nasty evolutionary artifact—the birds themselves are producing more males because years of selection had told them to do so. But in the Hawaii creeper, it's not their fault. When they breed, there are as many female as male baby birds, the females are just dying at a much higher rate. Both sexes are struggling—their bills are shorter and they have less fat, suggesting poor nutrition and even starvation. Babies are energetically expensive, though, and weakened mothers simply can't survive the stress of breeding, while weakened fathers can.

The last blow to the Hawaii creeper: the Japanese white-eye, an introduced competitor. Photo by Trisha Shears via Wikipedia The only question that remained was why the creepers are dying now. These native birds have been threatened by habitat loss, introduced diseases, and novel predators like rats for decades—what tipped the scales against them? Freed & Cann think they've got that answer, too. In the early part of the 20th century, Japanese white-eyes were introduced to control bug populations. These small, green birds have expanded exponentially, and because they eat the same bugs and nectar that honeycreepers do, they are in direct competition with the native birds for food and resources. It's a battle that the Hawaii creepers are losing. Freed & Cann were able to show that when the white-eyes started increasing, the creepers started declining. It was one stress too many, and even this resilient bird couldn't hold on. "The future of the endangered Hawaii creeper at Hakalau Forest National Wildlife Refuge is precarious," the authors write in their conclusions. They say that immediate action is necessary if the creepers are to have any hope, and it has to start with the introduced Japanese birds. Even their removal, though, may not be enough. Unless the creepers produce more females than males for some time, the ratio will remain biased, and thus captive breeding may be necessary to boost the missing sex. Instead of a conservation success story, the Hawaii creeper is in serious danger of extinction. Soon, these charming little birds may join the dozens of other native Hawaiian animals that have been wiped out since humans arrived on their shores, leaving only museum specimens and bones to tell the tale of the beautiful species that once made these islands home. Citation:

Disclaimer: I had a personal hand in this research, running the genetic test for sex as a part of a rotation I performed in Rebecca Cann's lab as a part of my first year in the PhD program at UH.