In a future ravaged by climate change, one animal may come out on top: jellyfish. 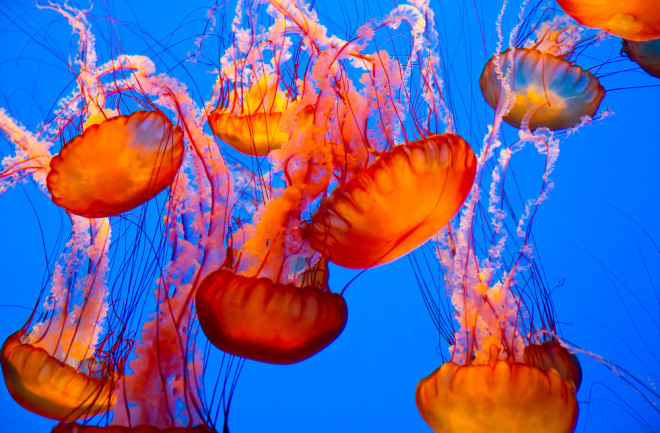 For the month of April, the canals of Venice were empty. Gondolas and vaporettos were moored, foreign tourists were sequestered in their home countries and local Italians were in lockdown. As a result, the sediment that had always floated in the canals finally settled to the bottom, revealing alien visitors. Not far from San Marco square, a jellyfish the size of a golden retriever was captured on video. It moves surprisingly fast down a canal, springing along at a jogger’s pace, bell pulsing and tentacles rippling.

If some creature is going to find a way to press on through a changing ocean environment, the jellyfish is a good candidate. They were on Earth at least 500 million years ago, back when Venice was a heap of smoking volcanic slag on the giant continent of Gondwana. And they will probably be wandering through whatever becomes of Venice 500 million years from now.

The Winners of Climate Change?

Under the right conditions — say, rising sea temperatures, fertilizer runoff and overfishing — jellyfish precipitously expand in numbers. Sudden blooms containing millions of stinging creatures have filled nets and capsized fishing ships; they’ve taken down salmon farms, killing millions of fish in the process; they’ve clogged the seawater intakes of coastal nuclear power plants, shutting them down until tons of goop can be dredged away; they invaded cooling pipes of the aircraft carrier USS Ronald Reagan, disabling it on its maiden voyage and forcing the sailors to evacuate. All this heavy human impact from an organism that’s basically organized seawater. As jellyfish scientist Donal Griffin at Queens University of Belfast put it to me, “jellyfish are just being jellyfish. Obviously they don’t know about climate change and ocean acidification. They’re just getting on with things.”

The key to jellyfish’s comparatively rosy outlook is their capacity to tolerate. It helps to not actually be fish at all, but something far simpler. “When you’re mostly water, it lets you adapt to changes in the water more easily than fish, that have internal processes that depend on certain levels of homeostasis,” Griffin says. In other words, jellyfish have survived extreme shifts in ocean chemistry because they need so little, are largely unbothered by heat, by cold, by water that’s gone too acidic or too basic. Oceans clogged with plastic, or whose large fish have been extracted by human fleets? No big deal to a jelly.

If jellyfish find themselves in hot, low-oxygen water, they have the option to float, expending little energy as they wait for currents to drag them into a pocket of better water. Not a trick your average sperm whale or tuna can pull off. Unlike fish, neither do jellies seem much bothered by acidic water. Jennifer Purcell of Western Washington University brought jellyfish to her lab to test their response to high acid levels — levels the oceans might reach in the next 200 years if climate change is left unchecked. It worked almost like an aphrodisiac: The jellies reproduced enthusiastically even in a chemical environment that would have left other sea creatures scorched and dying.

It’s cheeky to think of any animal as a “winner” of climate change, but for those willing to entertain the concept, jellyfish make a good candidate. Evolutionary biologist Stephen Jay Gould once argued that the history of life isn’t simply a gradual change in organisms, but punctuated equilibrium: Long, relatively stable periods give way to rapid speciation after some dramatic event flushes away many of Earth’s existing species. It all raises a question: If that jellyfish making its way through the canals of Venice is in better condition to face climate change and overfishing, is a Jelly Age on its way? If so, what might the jellyfish of the future look like?

The Future is Jelly

So I sat down with Nova Southeastern University ecologist and evolutionary biologist J. Matthew Hoch. If being the world’s foremost expert on barnacle penises weren’t enough to make me want to seek him out, Hoch is also willing to prognosticate on the dynamics of a possible Jelly Age. He reminded me right off that the clues to the future might already be here. Jellies are strikingly diverse. They have varied reproductive systems (some have sex, some clone), come in every color of the crayon box and range from microscopic to 7 feet long — and that’s not counting the tentacles. Some are functionally immortal, going from polyp (a stiff nub attached to a surface) to free-floating jelly and back forever, never dying in the process.

Even if jellyfish wind up having the seas to themselves, they might still look a lot like they do now, says Hoch. Their success has come from their simplicity, and why make big alterations to something that’s working perfectly well? Hoch pointed out that jellies exhibit radial symmetry, meaning they have just a top and bottom (unlike vertebrate fish, say, who have a front and a back, too, and therefore a left and a right). He couldn’t see much reason for them to leave their simple body structure behind. They’re a living example of the merits of streamlining. Why have two orifices, for example, when you can just have one? “Don’t forget that for jellyfish, the mouth and the anus are one and the same,” Hoch cautions. “And that’s key to understanding them.”

For most of us, our thoughts around jellyfish only go so far as whether we’re going to get stung by one. But our relationship is much deeper than that; you could even say that our destinies are entwined. Jellies have proven their capacity to take down our most advanced power sources and our mightiest warships. In return, we’ve rewarded them by clearing the seas of their predators.

But that’s not the jellies’ fault. Sure, jellyfish compete with fish for food sources, and feed on their eggs and fry, but Griffin, for one, is no fan of any doomsday scenarios filled with villainous world-conquering jellies. “In the future, if all the fish are gone, it will not be because jellyfish outcompeted them. Jellyfish are avid predators, but it won’t be because of that. It will be because we’ve continued to deplete fisheries.”

The jellyfish boom — and the fantastical diversification of forms and types that would happen along with it — might occur alongside humans, or after we’ve managed to erase ourselves from the planet. The big irony is, no matter how outlandish any coming Jelly Age could be, distant future life forms looking back probably wouldn’t notice that a jellyfish-dominated world had ever existed. Without bones or shells, jellyfish will leave scant fossil record of their existence. Future civilizations of ants or dolphins (or humans) might miss the Jelly Age entirely in their records of natural history, never knowing it existed. It’s hard to think the jellyfish would mind.