Plate Tectonics: The Slow Dance of Our Planet's Crust

The puzzle pieces of Earth's lithosphere are always in motion, slamming against each other and grinding past one another. 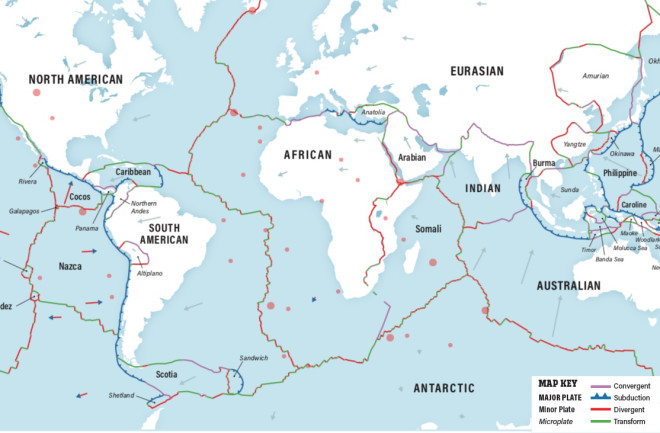 Earth is action-packed. Even if there were zero life on our planet, the place would be full of birth and death, marriage, breakup and even a little dirty dancing. That’s all thanks to the lithosphere, a solid layer of crust and part of the upper mantle that’s broken into more than a dozen slabs, or plates, of varying sizes. These pieces, divided between older continental crust and younger oceanic crust, ride atop the gooey asthenosphere, a semiliquid layer of magma and partly melted rock.

Most of us may think of Earth’s cracked and creeping crust only when we hear of a catastrophic event caused by it, such as an earthquake or volcanic eruption. But the puzzle pieces of the lithosphere are always in motion, slamming against one another, grinding past or getting shoved under another slab. More than a mere geological mosh pit, the plates play a key role in climate and evolution.

Continental: Crust that’s older and thicker, made of lighter-weight rock.

Oceanic: Younger and thinner, oceanic crust is made of relatively heavier rock.

Nearly all tectonic action occurs at plate boundaries. Smaller plates may get worn away completely over time, but the centers, or cratons, of larger continental plates remain stable — they include the oldest rocks on the planet.

Convergent: Where plates smash together, resulting in deformation or destruction of one or more plate edges. When one plate sinks below another, forcing it back down to Meltytown, it’s called subduction. This usually involves a heavier oceanic plate being shoved below a lighter continental plate. Examples: the Izu-Bonin-Mariana subduction zone (where the Pacific Plate is being pushed below the Philippine Plate, creating the deepest oceanic trenches in the world) and the Himalayan mountain range (where the Eurasian and Indian continental plates collide, crumpling up).

Plate Boundary Zones: Where multiple plates meet in complex, often poorly understood areas of activity that don’t fall neatly into one of the other categories. These zones involve larger plates and one or more microplates that may be both squished and stretched between them.

Hotspots: These areas of volcanic activity often exist thousands of miles from the nearest plate boundary. Below the solid lithosphere, thermal plumes in the semiliquid asthenosphere send out heat energy so intense that it melts the plate above it, allowing magma to seep up through the crust and sometimes reach the surface. For decades, geologists thought the plumes’ positions were fixed, and that, as the plates above them continue to move, they create arcs of volcanoes. However, newer research hints that the plumes themselves may also be able to move.

As the World Turns

The theory of plate tectonics took shape in the 1960s after more precise seafloor maps and seismic activity monitoring revealed signs of our planet’s shifting shell. But the ideas built upon those of early 20th-century German scientist Alfred Lothar Wegener, who proposed the theory of continental drift: The large landmasses we know today were once joined together in a supercontinent. Although first to describe the idea scientifically, Wegener was not the first to think it. Late 16th-century mapmaker Abraham Ortelius theorized that the Americas, Africa and Europe had been torn asunder by catastrophic geological events.

Researchers now believe continental plates have come together more than once in the deep past. While the very definition of a supercontinent remains under debate, researchers agree that many of these monster landmasses were large enough to affect global climate by shifting ocean and air currents. These climatic changes, along with the raising of mountains and other geological events driven by plate tectonics, created new ecological systems that encouraged species to spread and diversify.

What went where: Uncertain; remaining pieces of it are found today in the Pilbara Craton of Western Australia and Kaapvaal Craton of southern Africa.

What’s so super about it: Want to start a fight among geologists? Say Vaalbara is the oldest supercontinent. The truth is, most of the crust from Earth’s early days has been subducted, eroded or deformed beyond recognition. So reconstructions of the shape, location and time frame of the first supercontinent, however you define it, remain theoretical and hotly contested. It’s not yet possible to determine how much continental crust existed this far back in the geological record, or whether large pieces of it were connected. Some researchers consider Kenor, which may have formed around 2.7 billion years ago, as the true first supercontinent; others argue for the earliest mass-merging of crust around 2 billion years ago but can’t agree on whether to call it Columbia or Nuna.

What went where: The landmass was likely centered around the North American Plate’s craton, which may have been smashed against what’s now East Antarctica and southern Africa.

What’s so super about it: While Rodinia was not the first supercontinent, it’s the earliest one that everyone seems to agree existed — just don’t ask what it looked like. Most of what’s known about the supercontinent comes from fragmentary pieces of its orogens: the edges of individual continental plates that crunched up, forming mountains, during massive collisions. We know little of its overall shape beyond these crumple zones, though researchers believe it covered about 18 percent of Earth’s surface area. (By comparison, our planet’s modern land masses cover about 29 percent.) It was a lonely place, however; complex terrestrial organisms did not yet exist.

Gondwana: Long-Lived but Only Somewhat Super

What went where: Centered around Antarctica, it included most of today’s Southern Hemisphere landmasses.

What’s so super about it: While not all geologists consider Gondwana a true supercontinent, they do agree it was around a lot longer than Pangaea, which formed when Gondwana joined Laurasia, another semi-supercontinent. The longevity of Gondwana, and its timing, gave it a starring role in the evolution of life on our planet. It formed around the Cambrian Explosion, when the fossil record suggests a rapid increase in biodiversity. It then kept itself together as plants and animals emerged from the seas and onto its shores. By the time Gondwana began to bust up, dinosaurs and other iconic animal groups had used it as a superhighway to spread across much of the Southern Hemisphere.

What went where: Most — but not all — continental plates joined together in a rough C shape, centered around the equator.

What’s so super about it: Sometimes spelled Pangea, this mighty mashup was first proposed by German continental drift enthusiast Wegener in the early 20th century. (He originally called it Urkontinent, but an Anglicized version of his other term for it, Pangäa, was what stuck.) Although Wegener was wrong about some of the details, putting Pangaea on the map, so to speak, was an important landmark on the road to plate tectonic theory. Researchers believe that when this largest of supercontinents splintered into smaller pieces, it completely remade the global climate by forcing massive shifts in ocean currents. A 2017 Nature Geoscience study found the breakup released enough stored carbon dioxide to cause additional climate chaos.

The Next Big Thing

When: About 100 million years from now.

What’s going where: Likely in the Northern Hemisphere, joining the North American and Eurasian plates — and possibly Australia — around the North Pole.

What will be so super about it: While models remain highly theoretical, projections suggest continental plates will bump together next in the Northern Hemisphere.

Get a Move On

It’s unclear why our planet’s plates can’t stay put — or when they started moving. After Earth formed about 4.6 billion years ago, its surface was a hot mess of magma for a long time. Isotopic analysis of some of the oldest known rocks suggests that continental crust may have started forming as early as 4.4 billion years ago, but the details and timing of the process are unknown. Some researchers believe that, when the magma finally cooled enough to form a crust, it was a single, contiguous shell. But the mantle beneath, still hundreds of degrees hotter than it is today, may have melted and fractured the fragile crust into pieces, or plates.

What set the plates in motion is still debated, but most researchers think that subduction — when one plate overrides another — explains why they remain in motion. The immense force of the cooler, denser plate being pushed down into the mantle creates tremendous energy, which then circulates in a convective flow, pushing up hotter, less dense magma that breaks through to the surface along divergent boundaries.

Salt crystals left impressions in 3.5 billion-year-old mudstone, part of WesternAustralia's Pilbara Craton. The craton, a stable interior of a continental plate, maybe one of two remaining pieces of Vaalbara, a theoretical supercontinent. Theother piece, the Kaapvaal Craton, is in southern Africa. (Credit: Auscape/UIG via Getty Images)

How to Date a Creep

A host of satellites, plus additional ground monitoring networks, precisely track current plate movement speeds. To learn how fast these slabs of creeping crust moved in the past, researchers have a few tools.

Make a match: Rocks of the same age and composition — especially if fossils from the same ecosystem are present — likely came from one formation. If pieces of that formation are found on different plates, researchers can measure the distance between them and, using their age, calculate the speed of the split.

Follow the stripes: Earth’s polarity switches back and forth over time. As magma cools into rock, magnetite grains, dispersed within and aligned with the magnetic field, become fixed: This records Earth’s polarity at the time the rock formed. Oceanic crust, made of basaltic rock and rich in magnetite, is created at divergent plate boundaries, where the mantle is constantly coughing up new magma. As the magma rises, cools and gets pushed aside by newer magma, the magnetite within it preserves a record of Earth’s fickle magnetic field. Seen on a seafloor map that shows this record, the periods of reversed and normal polarity appear as stripes. This magnetic striping can reveal how fast the plate boundary expanded during a particular period of polarity, providing a broader sense of the speed of plate movement at that time.

Because they’re denser and subduct beneath continental plates, oceanic plates don’t stick around as long. Large swathes of continental crust are billions of years old, but the oldest pieces of oceanic crust still floating around the lithosphere are at most only a few hundred million years old, and most of it is much younger. Researchers are able to build a 3D model of some of the subducted crust through seismic tomography. The technology uses subtle differences in how waves generated by earthquakes travel through Earth’s deep subsurface to identify anomalies, such as a half-melted plate. Data gathered about such anomalies can be used to generate images of what’s left of the plate as it melts in the asthenosphere.

The once-massive Farallon oceanic plate, for example, is nearly gone, subducted beneath the North American Plate. Just a few slivers of the Farallon remain, along the Mexican coast, south of Baja California and in the Pacific Northwest. Researchers have been tracking the plate as it sinks ever deeper into the mantle. Its leading edge is now roughly below the Mississippi Valley; the Farallon’s movement may be linked to devastating 19th-century earthquakes in the New Madrid Seismic Zone, centered around southeastern Missouri.