In the Goualougo Triangle of the Republic of Congo, a chimpanzee is hungry for termites. Its prey lives within fortress-like nests, but the chimp knows how to infiltrate these. It plucks the stem from a nearby arrowroot plant and clips any leaves away with its teeth, leaving behind a trimmed, flexible stick that it uses to "fish" for termites.

Many chimps throughout Africa have learned to build these fishing-sticks. They insert them into termite nests as bait, and pull out any soldier termites that bite onto it. But the Goualougo chimps do something special. They deliberately fray the ends of their fishing sticks by running them through their teeth or pulling away separate fibres - just watch the chimp on the right in the video below.

The result is a stick with a brush-like tip, which is far more effective at gathering termites than the standard model. This population of chimps has modified the typical design of the fishing stick to turn it into a better tool. They truly are intelligent designers.

Naturalists first suggested that chimps deliberately manufacture brush-tipped sticks to dig for termites in 1985 and indeed, these sticks have been found all over central Africa. But fishing sticks fray naturally when they're used and East African chimps are known to actively remove the frayed ends from their probes. So it seems that in most cases, the brush-sticks are just the discarded remnants of active tools.

Crickette Sanz from the Max Planck Institute for Evolutionary Anthropology has found the first true evidence that some chimps actually shape them that way. She used motion-sensing cameras to record chimps fishing at termite nests and collected footage of 31 individuals, 54 fishing attempts and 65 hours of foraging. Her videos clearly show that the chimps deliberately fashion their fishing-sticks with distinctive brush-tips. 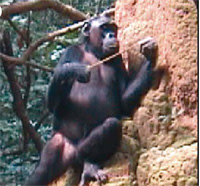 All of the chimps arrived at the termite nests with arrowroot stems and proceeded to refine their tools. The vast majority of the modifications involved fraying the tips, mostly by pulling the ends through their teeth, or by biting individual fibres apart. That behaviour has never been seen in other contexts - it's an action specific to the creation of fishing-sticks.

After fashioning the brush, they would almost always straighten it by pulling it through their partially closed fist, presumably to allow them to insert it more easily into a nest-hole. Occasionally, the videos showed that the stick wouldn't fit, whereupon the chimp would straighten it again until it did.

The brush-tipped sticks are multi-purpose tools too. Sanz's video showed that four chimps occasionally flipped the stick around and used the blunt end to clear debris from a nest-hole, before using the brush again to collect termites.

To Sanz, these shots were clear signs that the chimps were deliberately modifying their tools in a way that other populations were not. To make sure that she wasn't just laying her own interpretations on the footage, she asked a research assistant who had no idea what the study was about to analyse the videos. They came to the same conclusion.

Sanz also found that the brush-tipped design is an improvement over the standard model. She gave standard and brush-tipped sticks to five local guides and set them out to fish for termites. Each guide tried both versions on the same holes, for the same amount of time and the same number of attempts.

The standard models fared relatively poorly, picking up termites 18% of the time and averaging just one insect every four attempts. The brush-tipped tools were dramatically more successfully - they gathered termites on 76% of fishing attempts and netted about 5 insects per go, almost 20 times as many as the unmodified tools.

The results clearly show that this particular group of chimps have improved on the standard blueprint of fishing-sticks and they craft these tools with specific design in mind. Surely not long then before they design a stick with a corkscrew, nail file and small pair of tweezers in it too...