Cone Snail Venom: The Best Offense Is A Good Defense 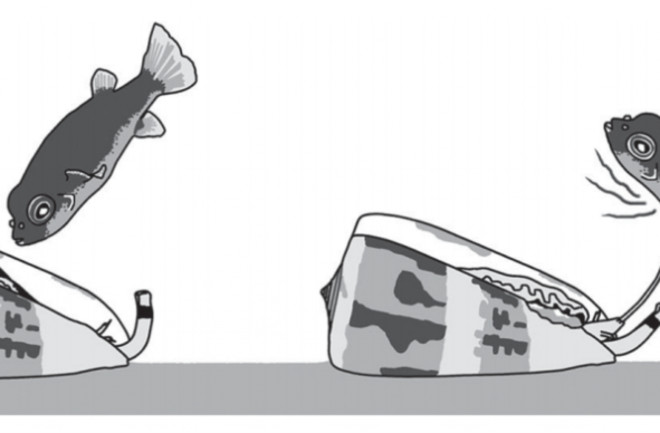 One of the most potent toxins in venomous cone snails likely started as a defense against hungry fish. Image from Figure 4, Jin et al. 2015 Cone snails are among the most venomous animals on the planet, with some species able to kill an adult human in a matter of minutes. Some species hunt worms, some hunt other snails, and some even hunt fast-moving fish, the last of which are the most dangerous to us. Evolutionary studies suggest that ancestral cone snails were worm-eaters, and that fish-eating is a relatively new phenomenon. Which begs the question: how does a snail go from a slow-moving worm-hunter to a quick-striking fish-hunter? A team of scientists thinks they may have found the answer: the snails turned defensive toxins into attack weaponry. All cone snail venoms consist largely of conotoxins, biologically active peptides that target muscles and neurons. Hundreds — and even thousands — of different conotoxins can be found in every Conus species, and each employs its own unique combination to paralyze its chosen type of prey. But recently, scientists discovered that the diversity of cone snail toxins is even more impressive, as these little snails are able to produce and use completely different venoms for attack and defense. The attacking toxins are produced at one end of the venom duct, while defensive ones are made at the other, thus giving scientists the means to determine whether a particular toxin is used when capturing prey or defending against potential predators. In the fish-hunting cones, one particular family of toxins — delta-conotoxins — are considered absolutely necessary for catching fish, as they have been found in every fish-hunting species studied to date. These toxins prop open voltage-gated sodium channels in vertebrates (including fish and humans), effectively stopping nerve signals in their tracks and causing quick and deadly paralysis. A slow-moving worm or snail-hunter would have no need of d-conotoxins to stop its prey, and thus its not surprising that previous studies have not often found d-conotoxins in the predatory venoms of worm or snail-eating species. The discovery of d-conotoxins in these species, then, would provide evolutionary clues as to the origin of the fish-hunters' venoms. So scientists from the University of Queensland and Université Montpellier took a combined genetic and proteomic approach to see if they could find d-conotoxins in worm-hunting species — and, lo and behold, they found them. In a study published this week in Proceedings of the Royal Society B, the Australian and French team unveil a d-conotoxin (d-SuVIA) from the worm-hunting Conus suturatus as well as the discovery of 11 other novel d-conotoxin-like sequences from other worm-eating cone snails.

An evolutionary tree showing the relatedness between the new worm-hunting snail d-conotoxins and the d-conotoxins found in fish-hunting species. From Figure 1, Jin et al. 2015. But while the fact that they found these d-conotoxins in snails that should have no need of them is interesting in itself, what was most telling was where they found them: in the part of the venom duct where defensive venom toxins are produced. "A predatory use seems unlikely as we show that d-conotoxins are produced in the proximal part of the gland, which is consistent with a defensive weapon" the authors explain. There was other evidence, too; the isolated d-SuVIA strongly activated one particular type of sodium channel, NaV1.7, which is found in peripheral sensory neurons, particularly pain-sensing ones. Furthermore, when the scientists injected the toxin into mice, the mice displayed behaviors consistent with intense pain. Inducing pain is an excellent way to get a predator to back off, thus the pain induction from d-SuVIA was the last piece of the puzzle. These conotoxins weren't originally for killing fish — they were used to stun and scare them away. "We propose that defensive d-conotoxins were originally used by ancestral worm-hunting cone snails to protect against threats such as cephalopod and fish predation," the authors write, "and have been repurposed for fish-hunting." For these venomous snails, their best offensive weapon likely began as their best defensive toxin. The scientists are eager to look for more d-conotoxins in other worm-eating species of cone snail to see if the same defensive strategy is found across many different species. It's likely they'll find them: there are an estimated 70,000 different conotoxins throughout the sundry species of cone snail, and less than 1% of the peptides have been characterized. Citation: Jin A-H, Israel MR, Inserra MC, Smith JJ, Lewis RJ, Alewood PF, Vetter I, Dutertre S. 2015 d-Conotoxin SuVIA suggests an evolutionary link between ancestral predator defence and the origin of fish-hunting behaviour in carnivorous cone snails. Proc. R. Soc. B 20150817. doi: 10.1098/rspb.2015.0817