Sailors of the sky. 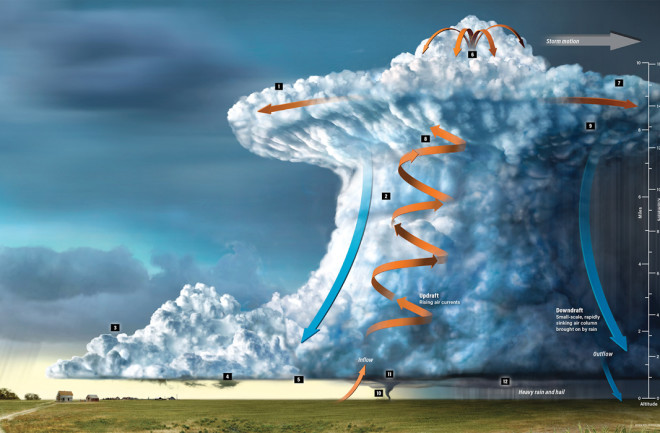 Drops. That’s all there is to clouds — they’re made from countless water drops too small to see with the naked eye. The atmosphere is actually full of these drops, which scientists call water vapor. As the drops rise, they cool and stick to things like dust, ice, sea salt, even pollution, creating clouds. The vapors take on all manner of shapes — and we don’t mean hearts or mythical beasts, or whatever else people imagine seeing. The American Meteorological Society, official chronicler of clouds, lists 10 cloud genera, 14 species and nine varieties. The strangest of these may be Earth’s highest, at 250,000 feet or more: thin, wispy noctilucent clouds (left), visible only at twilight.

Clouds cover 70 percent of Earth’s surface any given time, so they play an important role in shaping climate. As the sun’s warming light hits our planet, clouds reflect some of that energy back into space. They also trap some of the energy in the air between them and Earth. So clouds both cool and warm our world. In models, the largest source of uncertainty about how much our climate will change stems from not completely understanding the impact of clouds. Will they slow or quicken warming?

Most models predict that changing cloud patterns will add to the warming. One pattern being watched: As tropical dry zones expand, mid-latitude storms push toward the poles. In 2016, research published in Nature looked at cloud observations from the past several decades and found that clouds were indeed shifting poleward as predicted.

Anatomy of a Supercell

A supercell, an outsize cumulonimbus cloud with a rotating updraft, is extremely dangerous to people, property and even flying airplanes. Fortunately, supercells are rare, and a classic one is fairly easy for storm watchers to spot, enabling warnings. It’s important to avoid its most dangerous areas: the downdraft, where rain, now too heavy to support, brings air back down; and the updraft, where rising air feeds the storm’s hallmark rotating core. The downdraft can bring heavy rain and hail. The updraft can spawn tornadoes.

2. Rotation: Supercells have rotating updrafts, caused by rising warm air, which enable them to develop fierce winds, large hail and tornadoes. Unlike supercells, which can last hours, garden-variety storms are short-lived because they don’t rotate.

5. Rain-free base: Dark clouds, usually without rain, can occur at a thunderstorm’s updraft.

8. Mesocyclone: This rotating region spanning several miles wide can be picked up on Doppler radar.

12. Shelf cloud: A low-level cloud, often wedge-shaped and usually tied to a gust front, forms when the wind picks up right before a thunderstorm.