Forty years of data show that migratory birds have been shrinking as the planet warms. 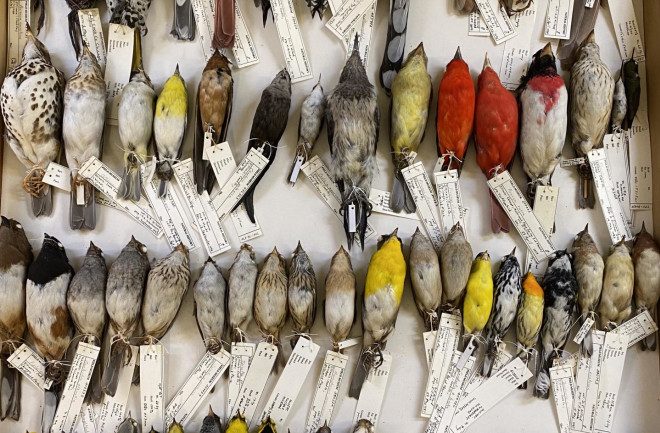 Some of the thousands of birds in the Field Museum's collections that crashed into windows in downtown Chicago. (Credit: Field Museum, Ben Marks)

In the spring and fall migration seasons each year, billions of birds wind through the central U.S. as they soar the skies between Latin America and Canada. For many, the journey is deadly. Recent research from the Cornell Lab of Ornithology in New York estimates that a whopping 600 million birds in the U.S. die every year after crashing into tall buildings.

And for traveling birds, Chicago — where a skyline of glass and steel stretches across a heavily trafficked migration route — may be the most perilous of all U.S. cities. Many strike the windows of McCormick Place, the largest convention center in North America.

Yet these tragic collisions have borne surprising scientific fruit. Over the last 40 years, scientists and volunteers from Chicago's Field Museum have collected thousands of fallen birds outside the stocky glass building and its neighboring skyscrapers. Dave Willard, the museum’s collection manager emeritus, took it on himself to measure each of the dead animals and catalog the data by hand in a ledger.

Now, scientists have analyzed Willard’s staggeringly detailed dataset in a study published this week in Ecology Letters. The research shows that over the past four decades, migratory birds have been shrinking in size — a change that the authors suggest is a result of climate change.

Scientist Dave Willard measured 70,716 dead birds and recorded them, by hand, into ledgers like this. (Credit: Field Museum/Kate Golembiewski)

In 1978, Willard first heard about the birds hitting McCormick Place, located just over a mile away from the Field Museum. It was a casual conversation, but his curiosity was piqued. One morning, he walked around the building to find several dead birds lying on the ground.

Since then, Willard and other volunteers have collected more than 100,000 dead birds. And Willard took the time to painstakingly measure every individual specimen, recording the length of the animals' beaks, legs and wings with a caliper — a precision instrument for measuring small objects — and their masses with a scale. He then scrawled all of the results into handwritten ledgers.

Initially, says Willard, the idea was to see if different weather patterns impacted the variety of species that set out on the epic transcontinental journey from year to year. But as the scientists saw the sheer magnitude of the number of birds colliding with the city’s buildings, they realized the potential to study whether statistically significant changes were actually taking place.

“I’m a better data generator than I am a data analyzer,” adds Willard. “And the changes were small enough that it’s not like we could see them.”

In the study, a team of scientists from the University of Michigan analyzed the measurements from 70,716 dead birds across 52 species — such as thrushes, sparrows and warblers — that had been amassed between 1978 and 2016. They found that all of them saw a decrease in overall body size, with statistically significant declines in 49 species. The length of the tarsus, or lower leg bone, for example, shrank by 2.4 percent across the board.

“What jumped out at us right away is how consistent the trends are across different species,” says Ben Winger, the study’s senior author and a biologist at the University of Michigan. “I still think it’s the most surprising [finding]. We might have expected that some species were declining, but it became immediately clear that they were all declining in body size.”

At the same time, the birds’ wing length showed an average increase of 1.3 percent. The scientists found that the species with the fastest decline in body size also had the speediest gains in wingspan over the 40-year timeframe.

But what caused these changes — and what do they mean?

The research team suggests that the shrinking birds are likely a response to warming global temperatures. Within a particular species, explains Winger, individuals that live in colder climates are usually larger than those found in warmer areas. The phenomenon is known as Bergmann’s Rule.

“Because this is a pattern that people have recognized for over 150 years, it’s been predicted that we’ll start to see this playing out over time as the climate warms,” Winger says.

In short, bigger bodies help animals stay warm in cold climates, while smaller critters retain less heat. Since temperatures have been on the rise in the birds’ summer breeding grounds outside of Chicago, the researchers think this shift may explain the dwindling body sizes. Meanwhile, the birds’ increased wingspans might be an adaptation that lets them continue their seasonal cross-continental journeys, even with smaller bodies that pack less energy.

But Winger also notes that birds that develop in the nest at warmer temperatures tend to have smaller bodies as adults, due to what's known as developmental plasticity. The scientists say that more analysis is needed to tell whether the shrinking birds are actually evolving to adapt to the pressures of climate change or undergoing a fluid developmental response, as babies, to hotter temperatures.

“These aren’t necessarily exclusive to each other — they’re related things,” adds Winger.

And at the Field Museum, while Willard doesn’t plan to stop measuring specimens anytime soon, he suspects that someday he’ll have to turn over the job to another biologist. “The luxury of keeping that consistent is part of what makes this study a little different,” he says. “It’ll be up to people’s imaginations to use this dataset in ways that we haven’t even thought of yet.”