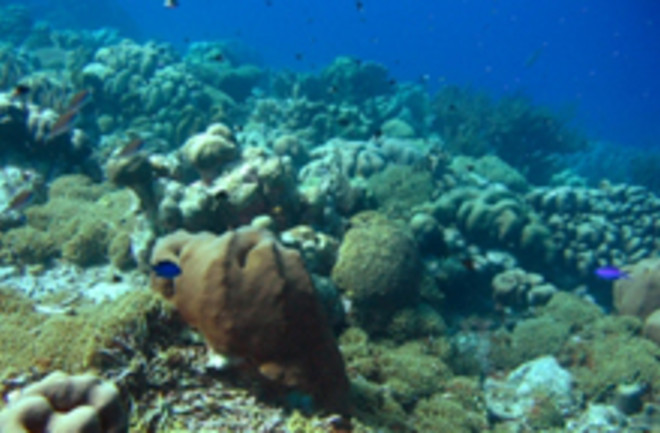 Scientists have long known that coral reefs are being threatened by disease, global warming and other factors. Now a new study shows that that majority of Caribbean reefs have, in fact, been "flattened" in the past four decades, as ornate branched corals have died out and been replaced by flatter, fast-growing "weedy" species.

Most of the reefs have lost all the intricate, tree-like corals that until the 1970s provided sanctuary for unique reef fish and other creatures, as well as protecting coastlines by sapping the energy of waves [New Scientist]

, according to the report, published in the journal Proceedings of the Royal Society B. The coral reefs that were initially the most complex have almost been completely eliminated, says the researchers, who

analysed changes in the structure of reefs using 500 surveys across 200 reefs conducted between 1969 and 2008. They found that 75 per cent of the reefs are now largely flat, compared with 20 per cent in the 1970s [ScienceDaily].

"For many organisms, the complex structure of reefs provides refuge from predators....

This drastic loss of architectural complexity is clearly driving substantial declines in biodiversity, which will in turn affect coastal fishing communities" [ScienceDaily].

The demise of coral reefs could also mean that tropical storms will cause more erosion and flooding in coastal areas, since flatter reefs are also less effective in protecting coastal homes and villages from storm swells and tidal surges.... "Many scientists think there will be more hurricanes in the future" [Reuters]

, says Alvarez-Filip. The death of the reefs came in two waves, the first of which occurred in the late 1970s, when disease killed about 90 percent of Elkhorn and Staghorn corals.

More recently intense and frequent coral bleaching events, a direct result of rising sea surface temperatures due to global warming, have caused much more reef flattening, say the researchers [Telegraph]. The largest impact has occurred within the last decade, and is not only due to climate change but to additional human factors like coastal development and over-fishing.