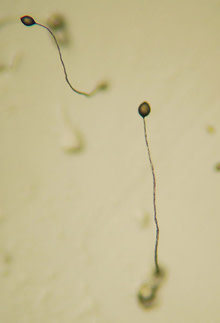 Humans farm. So do ants and termites. But amoebas? Indeed they do, say scientists who have studied a kind of amoeba that might be the world's tiniest farmer. From Ed Yong:

The amoeba, Dictyostelium discoideum, is also known as a slime mould, but scientists who work with it sometimes use the more affectionate name of Dicty. Dicty spends most of its time as a single cell, oozing through the undergrowth in search of bacteria to eat. When they run out of prey, the amoebas unite to form a many-celled mobile slug. When the slug finds a good spot, it stretches upwards to form a ball at the end of a stalk. The ball is loaded with spores, which eventually blow free on the wind. When they land, they hatch into new amoebae and the life cycle begins again.

Scientists pieced together Dicty’s life cycle decades ago, but it still carries surprises. Debra Brock from Rice University captured 35 wild amoebas from Virginia and Minnesota and found that a third of them carried bacteria in their slugs and spores. The bacteria hail from a number of different species, and half of these are found on Dicty’s menu. When the spores land in new locations, their bacterial cargo start to multiply, which provides the amoebae with food.

Dicty doesn't need to farm the way we do with our fertilizers and crops. It simply totes along its bacteria and lets them grow upon reaching a new destination. And by doing this, the bacteria-carrying amoebas fared better than their counterparts when Brock placed them in a sterile environment to simulate sterile soil. For plenty more about Dicty, check out Ed's full post at Not Exactly Rocket Science